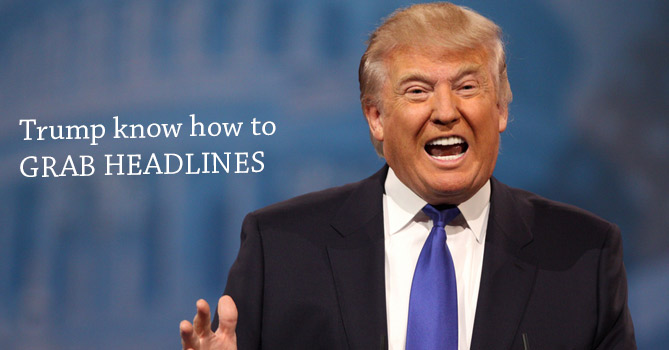 He is a brash and sounds arrogance in his speech when he raises issues like American economy, its security and foreign policy. Critics say he is a split personality as when he is at his most serious, he makes people laugh. Rather than upsetting him, such portrayal of personality bemuses Donald Trump, the Republican candidate for presidential nomination for the 2016 elections. The 69-old billionaire real estate developer, however, knows one thing clearly and that is how to grab media headlines. A few days back he lashed out former President George W Bush for the 9/11 incident. Without sounding an apologetic, he had recently said that irrefutable evidence existed that suggested that the former President and his national security team were repeatedly warned about the impending attacks, yet they failed to stop the US from being the target of that horrible terrorist onslaught.

He again created a furor when he said the world would have been better if dictators like Iraq’s Saddam Hussein and Libya’s Moammar Gadhafi were alive. Backing such views, he said he believed the Middle-East region would have been less fractured and more stable if the two autocrats had not been forcefully pushed out of power. It should be noted that former dictator of Iraq, Hussein was dethroned from power following the U.S. invasion in 2003, while Gadhafi was ousted in the wake of violent conflict in 2011 which ultimately led to a NATO-led intervention.

By making such statements, he has been able to garner some brownie points for himself at the time when he is locked in a fierce battle with Ben Carson, the other Republican front-runner. According to a latest opinion survey conducted by Public Policy Polling, a US-based non-profiting organization, while 47 per cent people in Iowa think Ben Carson should become the next US President, 44 per cent say Donald Trump fulfills every parameter set for any would-be US head of state. In South Carolina, according to CNN poll, while 28 per cent people support Ben Carson who is a retired neurosurgeon,  as many as 27 per cent  support Donald Trump. Among evangelical Christians too, Carson is a favorite. Yet Trump is closing the gap between him and Carson in the popularity chart in the American states called Republicans’ bastions and all this because of his straight, non-hesitant and impetuous articulation. Recently, he was in the soup for remarks that illegal Mexican immigrants are “bringing drugs. They are bringing crime. They are rapists.” Soon after such remarks, it is said that Trump lost business deals with five companies, while sparking a minor diplomatic row with Mexico.  Still, it is yet to ruffle up both Trump and his supporters.

Pervasive disenchantment with politics and politicians are said to push Trump’s electoral card up in the US. In a recent New York Times/CBS News poll when people were asked to cite three reasons for supporting the real estate businessman, they marked his outspokenness, non-politician like attitude and strong personality-as the key points for earning favorable backings. Participating in a debate, last week he said if he could successful run a business he could equally run a successful government in the US. This unabashed remark is seen as a straightforward and forward looking stand and this is what makes Trump stand out of crowd. Yet he has miles to go before he is selected as Republicans’ presidential candidate.

Yet another time, Republican presidential candidate Donald Trump is in news for wanting to ban Muslims from entering the U.S. It was during a campaign that Trump proposed the ban, saying that it would apply to both immigrants and visitors who follow Islam. He feels that the ban should stand till the country’s representatives figure out what kind of threats ‘people believing in jihad’ possess. He has been called ‘unhinged’ by his rivals for such comments.

Donald Trump says he will not leave 2016 US presidential race

Donald Trump, Republican presidential candidate, has said that despite the widespread criticism of his remarks about Muslims, he will not quit from the 2016 presidential race. Media reports quoted Trump as saying that he will not step aside, no matter what. Criticizing Trump’s comment that the US should ban Muslims from entering the country, the White House had said that Trump was disqualified from running in the 2016 presidential race. Trump’s comments, which were criticized globally, were made following the terrorist attack in California.

Donald Trump defends the use of word “schlonged” against Hillary Clinton

US presidential candidate Donald Trump said the word “schlonged” is not vulgar. As per reports, Trump took to Twitter to defend the word, which he used to describe Hillary Clinton’s primary loss in 2008. In his defense Trump said, when I said Hillary got ‘schlonged’, it means beaten badly.