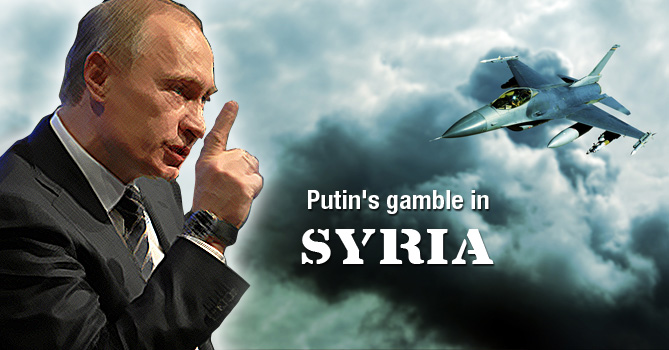 The Islamic State (IS), also referred to as the Islamic State of Iraq and Syria (ISIS), is a jihadist militant group that is currently in control of many parts of Syria and Iraq. Subscribing to an extreme version of Sunni Islam, the group is fanatic about spreading its “state” or “caliphate” over many parts of Africa, Europe, and Asia. The growing terrorist activities of the IS have left the global community completely shocked and the need for a cohesive opposition has been felt for some time now.

Through 2014 and the early part of 2015, the US and other western countries have formed a loose coalition to oppose the ISIS. In March 2015, the U.S. also led a series of air strikes against the ISIS in Syria but this was a limited and short-lived operation. Given the upcoming Presidential elections and its bitter experience of involvement with Middle Eastern and Islamic nations in past military operations, the U.S. seems rather reluctant to take up a more active role against the ISIS for now. Besides, the U.S. seems to be walking a tightrope with regard to Syria. While U.S. President Obama has been unambiguous in his opposition to the terrorist state set up by the ISIS, he is just as vehement in his resistance to the Syrian President Bashar al-Assad. The U.S. and a U.S.-led coalition of nations support the National Coalition, one of Syria’s main opposition alliances, and military aid has been provided to this group of “moderate rebels”.

President Vladimir Putin of Russia is one of President Bashar al-Assad’s most influential backers and supporters. Though President Assad has been termed intolerant (by the U.S. and by many European nations) and said to have perpetrated atrocities in the country, he seems to have found solid support in Russia due to the country’s naval interests in Syria. The naval port in Tartous in Syria has been leased by Russia. This is Moscow’s major base in the Mediterranean Sea. Russia also controls the Latakia air base in Syria. Assad’s continued Shia regime is important to maintain Russian interests in the country. Putin has been backing Assad and blocking all resolutions against him at the United Nations for a while now. The growth of the Islamic State is one of the major threats to Assad’s regime, apart from being an international terrorist concern.

Under the instructions of Putin, the Russian Air Force started conducting air strikes in Syria on September 30, 2015. The primary target for these strikes were the IS bases in Syria and according to reports from the Russian Air Force a number of major IS facilities, including a key command center, have been destroyed. Russia, however, still views all Syrian rebel groups, including those backed by the western nations as terrorists. News reports from Europe say that a number of moderate-rebel facilities and civilians have also been hit by the air strikes. Russia claims that over 500 mercenaries hired by the ISIS have abandoned their stations following widespread panic caused by these airstrikes. The success of the strikes has prompted Russia to intensify its campaign.

The U.S. President Barrack Obama, as expected, was very critical of Putin’s approach to solving the Syrian crisis. He said that Putin’s involvement came from a place of intense insecurity and a need to prove his political clout back home rather than a real desire to resolve the threat posed by the ISIS. Taking a personal stance, Obama said that Putin was leading Russia into a “quagmire” from which the nation would find it difficult to extract itself. Putin was shaping Russia into a nation that would be viewed as an enemy by both the Syrian populace that has come to resent Assad’s regime and also by most of the Sunni countries in the Middle East.

Reactions in the U.S. and Russia have been surprisingly different. In the U.S., Republicans have been quick to claim that Obama has lost Syria to Putin. Some political analysts have criticized the ineffective airstrikes conducted by the U.S.-led coalition. These strikes were careful to avoid ISIS centers in conflict with Assad’s troops. Other factions in the states have criticized the U.S. for allowing Russia to launch a campaign that may hurt America’s political allies in Syria. Russian media and political analysts, on the other hand, are gushing over Putin’s decisive move to reclaim Russian authority in the global community. Media and television reports have chosen to focus on the success of the strikes and contrast the destruction with that wrought by the American strikes. This has also taken the heat off the Putin government with regard to the Ukraine deal.

Reactions from the International Community

Along expected lines, reactions from the international community urged Putin to remain cautious in his approach and cautioned him from assisting Assad in asserting his unfair and cruel regime once again.

British Prime Minister David Cameroon was unambiguous in his opinion. He said “They are backing the butcher Assad, which is a terrible mistake, for them and the world.” Arab countries have also been staunchly in opposition of Russia’s move since they believe it is hurting the interests of the Sunni population in Syria. The U.S. issued a joint declaration along with the UK, France, Germany, Saudi Arabia, Qatar, and Turkey expressing concern that non-ISIS rebels may be affected badly by the Russian strikes.

A Brilliant Move or Fatal Mistake?

While it looks like Russia has decided to step in and play savior to a conflict torn Middle East in its attempt to stand up and tackle the ISIS menace when no other country will, Putin’s master play may also turn into a fatal mistake. Most of the Muslims in Russia (about 12 percent of the population) are Sunnis. Inviting the ire of other Sunni nations may not be a great idea. Also, making Russian Muslims the targets of the ISIS is also fatal for the nation’s well-being.

Another major worry is that Russian support may not be enough for Assad to step up and take control of Syria. Russia’s prolonged air strikes plan is based on ISIS’ lack of an air defense arsenal, thus minimizing the risks of any fatalities. Engaging on the ground, however, is likely to have severe repercussions, the likes of which Russia may not want to invite after its botched Afghanistan campaign.

A number of Russian missiles that were heading for Syria had fallen in Iran. According to media reports, the missiles were launched from a Russian ship. As per the U.S., at least four of these missiles crashed in Iran while they were flying over the country. Though it is unclear where the missiles have landed in Iran, it is believed that some buildings were damaged and civilians injured.