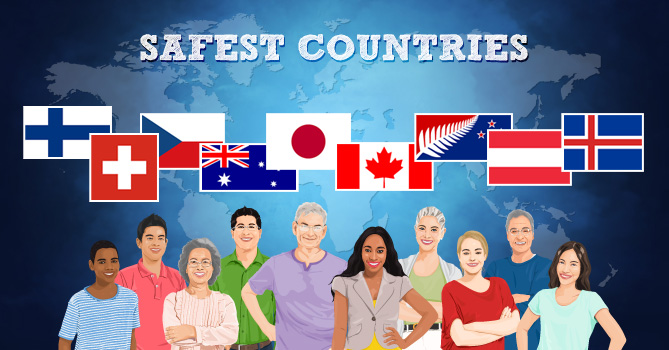 There are several secrets to living a well-rounded life. The choices that we make as individuals in our life are the most important in this regard. However, our greater community and the authority figures – the government to be precise – also play a major role in this by ensuring that the legal, social, and political set-ups function in complete harmony.

Czech Republic may be a new kid on the block but it happens to be one of the safest countries in the world. The crime rate is rather low over here and for anyone who does not know Czech, 112 is the helpline number to call. The country has also been able to build a sound economic system and the costs of living here are cheaper than most European countries. This means that there is enough opportunity for all to do well.

There are several reasons as to why Australia is one of the safest countries on the world. It is a multicultural country where the people are quite welcoming. The local culture here is commendable with high accordance to values like family and friendship. The quality of life here is exceptional as well, as are the healthcare facilities.

Japan has one of the lowest crime rates in the world. The people here are normally disciplined and cultured and this is why they shy away from any shameful activities like crime. The laws also forbid one from owning firearms and the economy is also wealthy making people happier in the process. This is the reason it happens to be one of the most peaceful countries as well.

Canada has never been targeted by terrorists. The North American country also has one of the highest immigration rates in the world, which shows it is safe for people. It has an excellent healthcare system and there are plenty of jobs in various sectors like energy, real estate, communications, and financial services. People who have moved here have also professed to an improvement in the quality of their lives.

Finland is one of the countries where values like civil liberty, human rights, and democracy are held in high regard. The crime rate here is pretty low as well. The Nordic country also has a steady economy, which contributes to the overall peaceful environment in the country. The Finnish Government has also avoided wars ever since the Second World War ended and the maximum penalties for crimes here are probation, community services, and fines.

The government in Switzerland has earned acclaim for the way it has been able to minimize problematic areas such as violence, rate of unemployment, and political issues to hitherto unprecedented levels. The laws here are rather strict and the economy is doing well. The people here are also very welcoming and make others feel at home. It has also diplomatic relations with its neighbors, an important component that makes its environment peaceful.

New Zealand is regarded to be one of the most politically transparent countries in the world. People in the country also have a rather easygoing and calm attitude towards their lives. They look to spend their lives in peace and not take part in personal or communal violence of any sort. The laws here are strict as well. It is also one country with one of the lowest corruption rates in the world.

The Government of Austria provides a lot of security to its people thus ensuring high levels of peace across the country. This is also one reason it is regarded as one of the safest countries in the world. Austria also has low population and there are plenty of jobs for all in sectors such as tourism, engineering, and research.

Denmark is one country that offers freedom and equal opportunities to every individual residing in the country. The gap between the higher and lower sections of the society is fairly lower than in many other countries. It was also plagued by problems like terrorism and crime till a certain point in time in its history but has been able to deal with those challenges in a commendable way to cement its status as a peaceful country.

One of the major reasons that indicate that Iceland is a peaceful country is its absence of an army. Instead it maintains rescue teams that deal with all kinds of criminal activities, if there are any that is. This is the reason why even small acts of crime such as snatching of wallets and pickpocketing are almost absent. It also has probably the lowest homicide rate in the world.

Why are Some Countries Unsafe?

There are several reasons as to why some countries are far more unsafe than others. One of the first reasons is government’s inability to maintain law and order. Quite often it is also seen that people partaking in crime in these countries come from the lower rungs of the society where they do not have access to sufficient facilities and opportunities in life in areas such as health, education, employment, etc. In some cases these countries are besieged by wars and in other instances they may have been formed newly after prolonged wars, a situation which makes development and peace really hard to come about. At present following are the unsafe countries in the world: