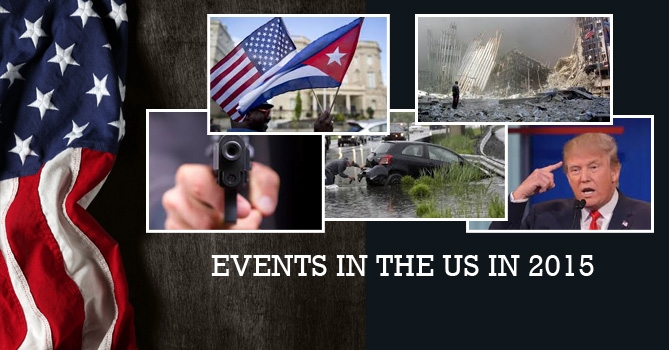 The United States witnessed a slew of events in 2015, ranging from the ordinary to the incredible and at times quite frightening. We bring to you some of the main events that occurred in the United States during the year, some of which have also impacted the world.

2015 has been a politically active year for the United States. July witnessed the United States and Cuba ending their bitterness and re-establishing diplomatic relations. The resumption of normal relations, which were snapped in 1961 after Fidel Castro stormed to power, will help both the nations to grow economically.

The same month also saw the US making another breakthrough on the political front. The United States, along with the UK, Russia, France, China and the EU, came to an agreement on the nuclear program of Iran. This was achieved after many months of debate. The United Nations Security Council’s sanctions against Iran were to be lifted in exchange for the reduction of Iran’s stockpile of enriched uranium by about 98 percent for the next 15 years.

But one Presidential candidate who has really stolen the limelight is Donald Trump. He has kept the Twiterrati active by calling the biggest newspaper in New Hampshire a “pile of garbage” to saying Hillary got ‘schlonged’, and calling to ban Muslims from entering the US (the list is endless), Trump has done it all.

September, too, was an important month as Pope Francis made his first visit to the United States. Upon his arrival, the US President Barack Obama greeted the pope. He participated in events in New York and Washington D.C and finally culminated his visit to the country by attending the World Meeting of Families in Philadelphia. In New York, he met with families who had lost their loved ones in the deadly 9/11 terrorist attacks.

While 2015 has globally been the warmest, the year has also seen the United States being battered by snowstorm, wildfires, floods and tornadoes. Many parts of the United States started the year on a cold note with people in Connecticut, Maine, New Hampshire and Massachusetts waking up to freezing temperatures. Winter storm Juno, which was one of the heaviest snowstorms on record, wreaked havoc over many cities. Tornadoes, too, kept their date with the United States; however, they were subdued as compared to the previous years.

In May, flash flooding occurred in Texas and Oklahoma. At least 17 people were killed and 40 others were missing. Though the Hurricane Joaquin steered clear of mainland United States, a record of 20 inches of rain in South Carolina led to flooding. The floods impacted 160,000 homes and caused damage worth $12 billion.

The Washington State witnessed one of the largest ever wildlife season. Declared a federal emergency on August 21, the extent of the fire can be gauged by the fact that the US had to deploy the army to help the firefighters contain the blaze. The fires claimed the lives of three firefighters and displaced thousands.

Accidents that rocked the nation

In May, an Amtrak Northeast Regional train that was en route from Washington to New York derailed. The train crashed on the Northeast Corridor in Philadelphia’s Northeast neighborhood killing eight people.

Terrorist attacks on the US soil

Terrorism kept the intelligence agencies in the US on their toes all through 2015. While the United States led a coalition to rid the Middle East of the ISIS, the terror group in turn carried out a few assaults on the country claiming a number of lives.

The first serious attack was carried out in May when two men attacked participants at an event, which featured the first inaugural “draw the prophet contest” being held at the Curtis Culwell Center located in Garland, Texas. No causalities were reported.

In July, a U.S. military recruitment center and a U.S. Reserve Center in Chattanooga in Tennessee witnessed bloodshed as Muhammad Abdulazeez, a 24-year-old Kuwaiti-born American went on a shooting rampage. Four US Marines and a sailor were killed, while a Marine and a Chattanooga police officer were wounded. Investigations revealed that a foreign Islamic terror group had radicalized Abdulazeez.

One of the worst terrorist attacks on US soil since the deadly 9/11 attacks was the December shootings in San Bernardino. At least 14 people were killed and 17 others injured when a married couple, Syed Rizwan Farook and Tashfeen Malik, opened fire at the Inland Regional Center. The pair was successful in escaping from the scene in an SUV but was later killed by the police. After it was revealed that the couple had links to the ISIS, the FBI started to investigate the case as horrific acts of terrorism.

Umpteen times some people in the country have lost their sanity and gone on a shooting spree gunning down people just to take out their frustration. In October, Chris Harper-Mercer went on a deadly shooting rampage at the Umpqua Community College in Roseburg, killing nine people. Later, the police shot Mercer. A few months earlier, 21-year-old Dylann Roof shot dead nine people inside the historic Emanuel African Methodist Episcopal Church, in Charleston, South Carolina. The ludicrous confession that Roof gave to the police was that he wanted to start a race war.

The Baltimore riots rocked the nation in April. Freddie Gray was arrested by the Baltimore police and he was in good health. But while being taken in a police van, he received injuries to his neck and fell into a comma. This led to protests which intensified after Gray’s death became public. The civil unrest witnessed damages to business, injuries to 20 police officials, 250 arrests and 150 vehicle and 60 structure fires.

In February, the New England Patriots defeated the Seattle Seahawks Super Bowl XLIX at the University of Phoenix Stadium in Glendale, Arizona. This victory came amid accusations of cheating.

Joey Logano in February became the second youngest winner of the Daytona 500 race. The youngest is Trevor Bayne.

U.S. boxer Floyd Mayweather, Jr. defeated Manny Pacquiao of the Philippines for the united welterweight championship at the MGM Grand Garden Arena on the Las Vegas Strip of Nevada by a unanimous decision in May.

In the IndyCar Series, Juan Pablo Montoya won the 99th Indianapolis 500. This was his second victory in the race and his first in 15 years, after winning in 2000.

The Academy of Motion Pictures Arts and Sciences organized the 87th Academy Awards in Los Angeles, California. Birdman bagged four awards. This included the awards for Best Picture and its director Alejandro González Iñárritu got the Best Director award. The Best Actor award was won by Eddie Redmayne for his performance in The Theory of Everything. Best Actress award was bagged by Julianne Moore for her performance in Still Alice.

In June, Bruce Jenner, former Olympian and television personality, became the first transgender person to appear on the cover of Vanity Fair magazine.