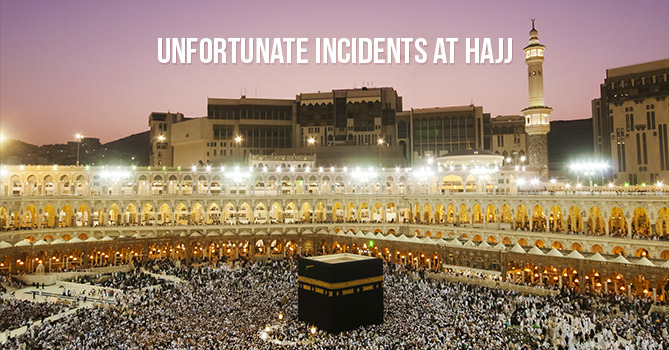 On 24 September 2015, 719 Hajj pilgrims lost their lives in a stampede and another 800 people were injured to various extents. The stampede happened at Mina, which is a valley located at a distance of approximately three miles from Mecca and the site of the ritual known as Stoning the Devil. It has in excess of 160,000 tents where the Hajj pilgrims spend their nights during the yearly pilgrimage. In fact, the 2015 Hajj has already seen a tragic incident when earlier in September a crane gave way at the Grand Mosque of Mecca and claimed 108 lives. The unfortunate thing about this catastrophe is that it is not an isolated incident but rather a continuation in a series of similarly- unfortunate incidents.

There has been a significant construction boom in Mecca. However, as Mustafa Hameed has pointed out in Foreign Policy, there are plenty of facilities that are still far from being adequate. Yemen, a neighboring country, is presently suffering from the MERS virus. In spite of all these issues, 2015 has seen a footfall of in excess of two million people from around the world. As prominent news channels such as Al Jazeera have reported the massive stampede has not dimmed the enthusiasm among other pilgrims and the ritual is continuing unabated.

Why did it happen?

A number of causes have been touted for what is being regarded as the deadliest incident of its kind. One of the main causes to have come up is that the pilgrims were in too much of a hurry to complete the rituals. Heat also played a major role and the fact that such a huge amount of people were pushing against each other only exacerbated things. There were also plenty of people on that day who may have been visiting Mecca and Mina for the first time and they may have been confused about the way in which to go about things. This can also be regarded as one of the major reasons.

One major reason doing the rounds is that there were too many people at that time and they had rather limited time. There are almost 2 million people and they had to complete a lot of rituals in just five days. Saudi Arabia is a rather hot place and the heat most often drains people, which can lead to such circumstances. On that day, the temperatures were in excess of 43 degrees and anyone who collapsed may have breathed his last.

The Health Minister of Saudi Arabia, Khalid al-Falih, said that it could have been possible that some pilgrims had not followed the instructions on movement provided by the Hajj ministry, as well as ones in charge of security, and that may have been a cause as well. In this case, the opposing movements of two groups of people – significant in number – created a barrier that could have also contributed to the stampede.

Why does it happen Every Year?

When one considers the fact that Hajj is a peaceful occasion one marvels at the amount of stampedes that happen here. One of the major reasons for this, as per experts on crowd management, is the lack of communication between people at the front of a row and those at the back. Quite often it so happens that people up front slow down because of some barrier while ones at the back are unable to see it and keep pushing ahead. In crowd management parlance, this is known as ‘Crowd Crush’ and death happens because of lack of breath rather than getting trampled. The sheer number of people at Hajj is also a problem and there is always a chance that people could be crushed by the sheer weight of people rushing to and from Mina.

Steps being taken by the Saudi Arabian Government

The Government of Saudi Arabia is already facing criticism from the international circle following the stampede, with the chorus of disdain being led by Iran – their rivals in the region. The Supreme National Security Council of Iran stated that the Saudis had lacked competence and it also implored the Saudis to count themselves responsible for the deaths. The comments of the Saudi Health Minister have been dismissed by Nigeria. King Salman of Saudi Arabia has ordered a safety review to be conducted in the context of the pilgrimage itself.

The national government earns billions of dollars from the Hajj pilgrims. However, it has also been spending billions of its own in order to improve infrastructural facilities like transport ever since the last major such incident happened nine years back. The abovementioned inquiry has been started by Mohammed bin Nayyef, the Crown Prince and the Chairman of Hajj Committee. He has promised quick results. King Salman has conveyed his condolences to the families of the deceased and stated that after the review efforts would be made to improve the management and organization and ensure the pilgrims enjoy greater levels of comfort. Already on the day after the stampede, the number of pilgrims was much less. The authorities were also more organized at the entry points.

Following is a list of major incidents of stampede that have happened previously during the Hajj: