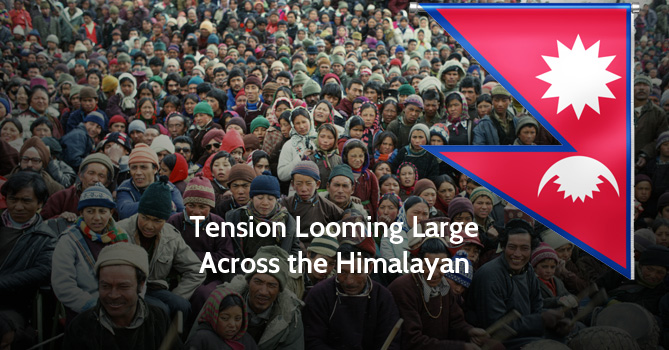 Nepal’s plain region bordering India’s Bihar and Uttar Pradesh is still on the boil; protests over newly promulgated Constitution have not been called off. In fact, tension is looming large across the Himalayan nation as hundreds of Nepal-bound trucks are halting at the border; raw food material and vegetable prices have shot up, while fuel crisis have brought the country to standstill. Nepal summoned Indian ambassador Ranjit Rae to know whether India had imposed any restrictions on trade with the Himalayan nation. On the other hand, senior Maoist leader and former Prime Minister Baburam Bhattarai has resigned from the party and has also quit his seat in the parliament while voicing anger over not taking into account Maithali speaking Madhesi and minority ethnic Tharu’s concern during the drafting of the new Constitution. These two communities, as per 2011 census of Nepal, form more than 51 percent of total Nepal’s population. Living in plain region called ‘Terai’, Madhesi’s grievances are manifold. They regard the formation of seven federal provinces under the new Constitution as highly unfair to their ethnic, cultural, and linguistic interests.

Of the total 22 Terai districts, only eight – from Saptari in the East to Parsa in the West – have been given the status of a province, while remaining 14 have been made part of hill districts. Madhesi and Tharu say it has been done deliberately to turn them minority. Under the new Constitution, 100 parliamentary seats have been allocated to the hill and mountain region, while only 65 seats have been given to Terai, even as it is more populated than the hill region. Already feeling neglected by Kathmandu, the Madhesi people have concerns that under the new Constitution, they may face the same situation that Tamils are facing under Sinhalese-dominated Sri Lanka. Madhesi’s grouse is regarding the citizenship issue too. Under the new Constitution, Nepali citizenship will be disproportionately getting affected if a Madhesi woman marries Indians or any other foreigner. In that case, she may not be able to pass her citizenship to her children. This sense is more acute among single mother.

Then under the new Constitution, only citizens by descent will be entitled to hold the posts of President, Vice-President, Prime Minister, Chief Justice, Speaker of Parliament, Head of Province, Chief Minister, Speaker of Provincial Assembly and Chief of Security agencies. Such clause is seen as discriminatory by Madhesi who have acquired citizenship by birth or naturalization. Upset at Nepal’s mainstream political parties like Nepali Congress, Unified Communist Party of Nepal-Maoist, and Communist Party of Nepal-United Marxist Leninist for overlooking their concern, Madhesi say the recently promulgated Constitution states that the National Assembly will comprise of eight members from each of seven provinces and three nominated members. Madhesi’s stand is that such fixing of number of seats for the National Assembly be made on the basis of population of the Provinces. Given such blatant discriminatory provisions of the new Constitution, India asked Sushil Koirala-led Nepal government to address the concerns of Madhesi. One of the major backers of the process of democratization in Nepal, New Delhi feels that the new Constitution is not broad-based and if anomalies there remain unattended, it could spur violence that could spill over into its own territory.

In fact, much before promulgation of the Constitution, Nepal had started burning. Unhappy with the new draft, reports of clashes between people and security forces had started coming in from different parts of the Himalayan nation. A few days back, as many as 40 people were killed in police firing in the Terai region. Nepal had steeped in deep chaos. The Ministry of External Affairs at the behest of Prime Minister Narendra Modi sent Foreign Secretary S Jaishankar to Kathmandu. He had held discussions with Nepal’s President Ramvaran Yadav, Prime Minister Koirala and leaders of all major political parties and is believed to have pressed Nepal’s government to delay the adoption of the Constitution and hold discussions with political groups and people who oppose it. But Kathmandu, giving snub to India, promulgated the Constitution. This was done even as during Prime Minister Modi’s telephonic talks with Sushil Koirala on August 25th, the former had categorically maintained that the political leadership of Nepal should resolve all outstanding issues through dialogue with all the political parties and through the process of widest possible consultation, including with people in order to strengthen the climate of trust and confidence across all sections of society.

Argument is given that such skewed form of the Constitution would always prove to be a bugbear for the unity and integrity of the Himalayan nation.

Even the country’s Hindu groups have voiced their anger over declaring Nepal a secular state under the new Constitution. Though it proclaims that the state will be responsible for protecting ancient religious practices, and also makes the cow, sacred to Hindus, the national animal, Hindu groups want the restoration of Nepal’s officially Hindu status, which was abolished nine years ago. But fundamentalist Hindu groups’ anger is not as much threatening as Madhesi’s unhappiness over the demarcation of boundary of provinces, delimitation of constituency, and proportional representation clause of the Constitution. Instead of 58 percent earmarked by interim Constitution for the election of indigenous, historically repressed and marginalized groups under the proportional representation, the new Constitution provides only 45 percent for the election of marginalized section under proportional representation. Similarly women’s groups are campaigning against the new Constitution that states that if a Nepali woman marries a foreign man, their children cannot become Nepali unless the man becomes Nepali citizen; where as if a father is Nepali, his children can also become Nepali irrespective of the wife’s nationality.

People say promises made by Nepal’s mainstream parties to make the new draft inclusive and representational in true sense have fallen flat. Madhesi leaders allege that the country’s big parties have tried to crush the minority groups and the new Constitution has been rushed through for the sake of the privileged old guard of politicians and not the common people. Bhoj Raj Pokhrel, a former election commissioner of Nepal, has warned that the state must immediately address the grievances of people opposing it; otherwise, it would lead to political crisis in the country. What is giving pain to the people is that even the Maoists have failed to give justice to their presence in the drafting committee of the Constitution. Madhesi, indigenous and marginalized people, complain that they had supported the Maoists’ guerrilla war for a decade; they saw them as the most progressive outfit, yet the leftists turned their back on them when they were needed to protect the interests of oppressed of the society. Thereby, with no remedial measures at sight, Nepal is bursting at seams. Worried over non-stop violence and continued disruptions of life due to bandh called by people in the Himalayan country, India called its Kathmandu-based ambassador Ranjit Rai for urgent talks. But India knows its limitations. Because of the China factor in Nepal, it cannot stretch its displeasure against the Himalayan nation beyond certain points. Thereby, till Nepal is out of crisis, it has no option but to press into action, its diplomatic efforts, so that mounting tension over the Constitution could not spill over into poll-bound Bihar.