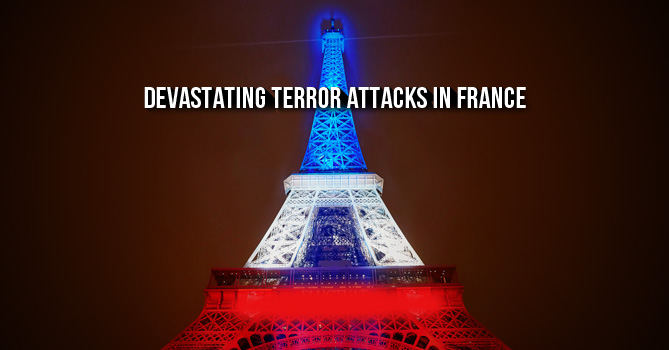 It was a kind of terrorist attack France had never witnessed before. Terrorists had staged coordinated strikes at six different locations across Paris, killing at least 129 people and injuring more than 300 others. Earlier in January, terrorists had also targeted the office of France’s popular weekly satirical magazine called Charlie Hebdo. Eleven people were killed and eleven others were injured in that incident. Yet, for the first time France or the whole Europe could see such a large-scale attack in the recent past and that also a coordinated one in which three of the total seven radicalized marauders had blown themselves up to maximize the impact of attack. Also read – Charlie Hebdo Attack

Following the incident, France has vowed to eliminate terrorism from its soil, but a closer reading of the development shows that the French government was not prepared to ward off threat from terrorists. Interrogation of jehadis linked with the current attack on Paris, France, has revealed that the preparation for terror strikes against France was going on for one year. This contention has been backed by Turkey which had informed about planned attack on France in December 2014 itself. Turkish police officials on the condition of anonymity told several prominent Western news outlets like BBC and the Guardian that they had passed on information to France about Omar Ismail Mostefai, one of the terrorists who blew himself up at Paris’ Bataclan concert hall. But French authorities did not take that info seriously.

It speaks volume of hollowness of France’s preventive mechanism; its surveillance system is under scrutiny. It is said that more than 1,300 French civilians have gone to Syria and Iraq to fight with ISIS and thousands of other potential jihadis are still on French soil, but there is not sufficient manpower to keep a check on them. For example, Paris spread in 762 sq km has, as per 2010 census, a population of around 6,673,591. To man them, there are 10,000 policemen. And then they are not well trained in counter-terrorism operation which includes overpowering surprising terror attack.

In this regard, a narrative made is that from 1986 to 2014 when several European countries were burning under the incendiary fire of terrorism, France was the lone Western nation which was safe from any terror-related incident. More than 50 people were killed in London sub-way attack in 2005. But French offices, streets and subways were devoid of terrorism. It was assumed that France’s security system was sturdy enough to thwart any blood chilling incident on its streets. All this, however, lay exposed when the office of Charlie Hebdo was attacked in January this year. The incident was closely followed by two shootings at Paris’s suburban market and the attack on a Paris-bound train. France was not used to such developments. As a result, attention on strengthening of system towards counter-terrorism was not paid the way the UK or other European countries have made in the past few years. Then there is a glaring gap in the country’s surveillance mechanism.

Even as there is a law to put any suspect behind the bars, the country’s intelligence services lack the necessary powers to search electronic communications and internet. Amidst this, problem lies with its mechanism to check radicalization of youth. French prisons are said to be breeding grounds for radicalized youth. In the 1980s, France passed a law allowing police to jail anyone suspected to have links to any group planning terror even if they had done nothing themselves. Hundreds of youth are behind bars due to this law. Their time in prison and contacts with other young Muslims, has turned French prisons into radicalization centres.

Nonetheless, following the November 13 attack on Paris, some Western countries have slammed the doors on migrants. In the aftermath of surfacing of reports that a Syrian passport was found close to the body of one of the attackers, one after another Western nation have begun to review their policy on the intake of migrants. While border security has been tightened in France, Italy and Belgium, in the Eastern European nations like Poland, Latvia, Slovakia and the Czech Republic, borders have already been closed for migrants. It should be noted that Slovakia and the Czech Republic were from the beginning hesitant on accepting migrants inside their borders. The terrorist attack on France has now given them valid reasons to put a restriction on the intake of migrants fleeing in thousands from Iraq, Syria and some other African countries to Europe for asylum.

Not only this, the incident has a cascading impact on the financial world also as stocks have fallen in many Western countries, while prices of oil and gold have jacked up as investors have started chasing safe heavens. But in any case, the incident has served as a waking call for international community which is still divided on the issue of terrorism on ideological lines. At the G-20 summit, though one after another member country called for united stand against terrorism, yet fingers are crossed whether they would put their weight behind passage of pending UN resolution against terrorism.