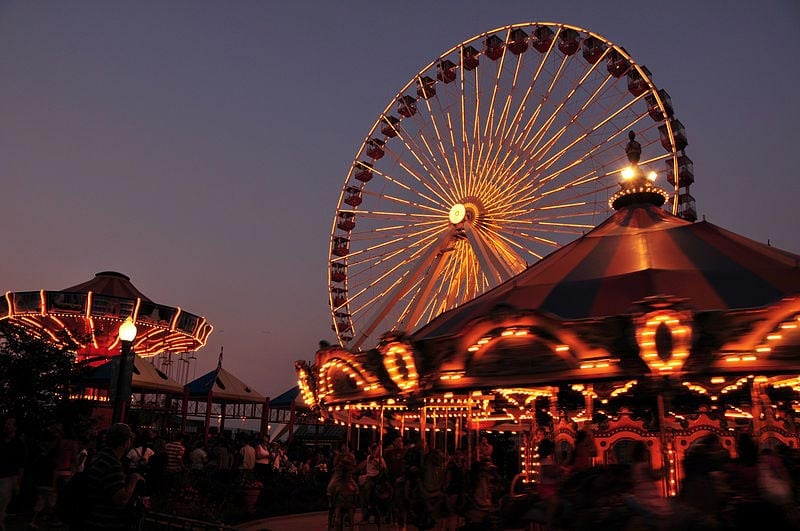 The top tourist attraction in Chicago, Navy Pier is an entertainment center of the city. Navy Pier extends out onto Lake Michigan, and features rides and attractions, restaurants, theaters, museums, and souvenir shops. Amazing Chicago’s Funhouse Maze completes the carnival atmosphere, while Chicago Children’s Museum is a fun and educational way to spend a day.

The Pier Park is ideally situated on the upper deck, between the Crystal Gardens and the Pepsi Skyline Stage. This area boasts of several attractions:

The very first among them is a permanent 150-foot-high Ferris wheel offering a 7-minute ride. The Ferris wheel features 40 gondolas, each with a seating capacity of up to six passengers. The brightly illuminated 40 spokes of the wheel, spanning over a diameter of 140 feet, are a treat for one’s eyes during the evening.

For those who wish to revive their old memories, the Navy Pier Park presents the musical carousel featuring 36 hand-painted animals that symbolize the different styles found throughout the history of carousels. The 44-foot carousel located near the Ferris wheel allures children of all ages with various characters such as a playful frog, horses and chariots, etc. A few scenes from the Navy Pier’s history can be viewed in the hand-painted rounding boards on the top of the carousel.

Another attraction located near the Ferris wheel is The Light Tower Drop-Bounce Ride, which is 13-feet high. This ride bounces you to the top and then drops you down.

The exhilarating Wave Swinger ride lifts the guests 14 feet in the air, and whisks them around for a pure thrilling experience. If you are inclined towards adventure and thrill, you must try this ride that towers nearly 40 feet over a pond of water. You can also enjoy token operated remote control boats. This is charged separately; $1.00 for one token and two tokens needed per ride.

The Smith Museum of Stained Glass Windows at the Navy Pier exhibits 150 stained glass windows arranged according to four themes, beginning from the Victorian era to the Contemporary.

The Navy Pier Grand Ballroom is an incomparable 80’s styled ballroom that offers panoramic views of Lake Michigan. Golfers can make their way to the Pier’s 18-hole miniature golf course.

Another attraction of the Pier is the Navy Pier IMAX Theatre. This 440-seat theater boasts of Chicago’s largest flat movie screen with an imposing size of 60 x 80 foot. You may enjoy both 2D and 3D movies at the theater.

Seasonal and special events are conducted in the exhibition hall at the Pier. The Navy Pier hosts live entertainment performances and various expositions throughout the year, like the Strictly Sailboat show and the Chicago Flower and Garden Show. The Navy Pier Yacht Club also organizes parties at the yacht.

For a romantic journey make your reservation to dine in one of the Pier cruises such as Odyssey Cruise, Spirit of Chicago, and Mystic Blue. You may also choose to enjoy sightseeing in cruises, boats, or private charters.

At the 100th anniversary of the Pier, the Centennial Vision re-imagines the Pier. The expansion process will contribute to make the public spaces appear dramatic, and aesthetically appealing.
Fireworks are conducted at the Pier from time to time. Check the schedule on the official website before finalizing your trip to the Pier.

If you are a shopping freak, there are various shops at the Navy Pier. Whether you are looking for Apparel & Accessories, or Chicago Souvenirs, or Gifts & Collectibles, or Toys & Games, etc., the shops at the Pier have all for you.

Restaurants at the Navy Pier 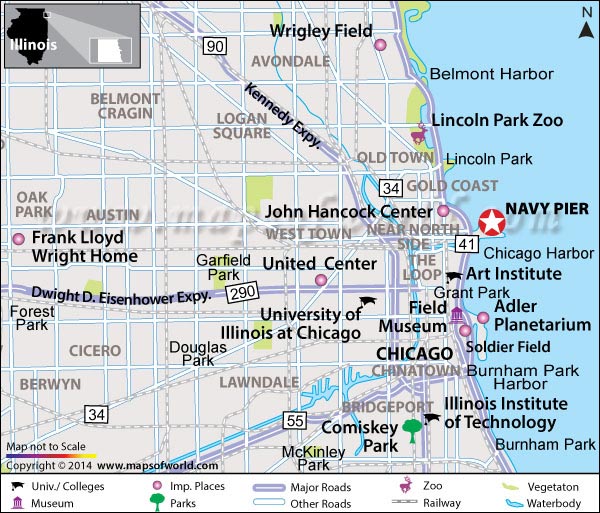 Where is  Navy Pier?

Navy Pier is situated in Chicago’s Near North, extending out from East Grand Avenue into Lake Michigan. If you wish to reach the Navy Pier via train, you need to take the Blue line “EL” train to the Grand stop from O’Hare. From the Grand Stop onboard #65 bus to reach the Navy Pier. There is an alternate route of the Orange line “EL” train. Many buses running from several routes to the Pier offer a plethora of options. Memorial Day through Labor Day and during special events, the Navy Pier offers free trolley services. The Chicago Midway International Airport is located at a distance of 13 miles from the Navy Pier. From the airport you can hire a cab or choose to travel in a bus to reach the Pier. A Shoreline Shuttle taxi runs between the Pier and the Loop via Chicago River from 10:00 a.m. to 6:00 p.m.

Spring and autumn are great seasons to visit Chicago’s Navy Pier, because weather is often warm and crowds are lighter. During summer, there are frequent fireworks displays off Navy Pier, as well as other festivities. In winter, Navy Pier turns into the Winter Wonderfest, a festive winter-themed park with an ice skating rink and themed rides and displays.

Navy Pier is open all around the year except Thanksgiving and Christmas Day. Hours of operation change with the change in season. The opening timings currently are 10:00 am and closing time is 10:00 pm.

Entry to the Navy Pier is entirely free. Parking and many attractions are chargeable. Single ride tickets for the Ferris Wheel or Wave Swinger cost $15 per person while all other rides (excluding Ferris Wheel & Wave Swinger)

Who owns the Navy Pier?

The Navy Pier has become a not-for-profit corporation since July 1, 2011.

What was the Navy Pier built for?
It was built for shipping and recreation.

Who built the Navy Pier?
The Navy Pier is a part of the “Masterplan of Chicago” projected by Daniel Burnham.