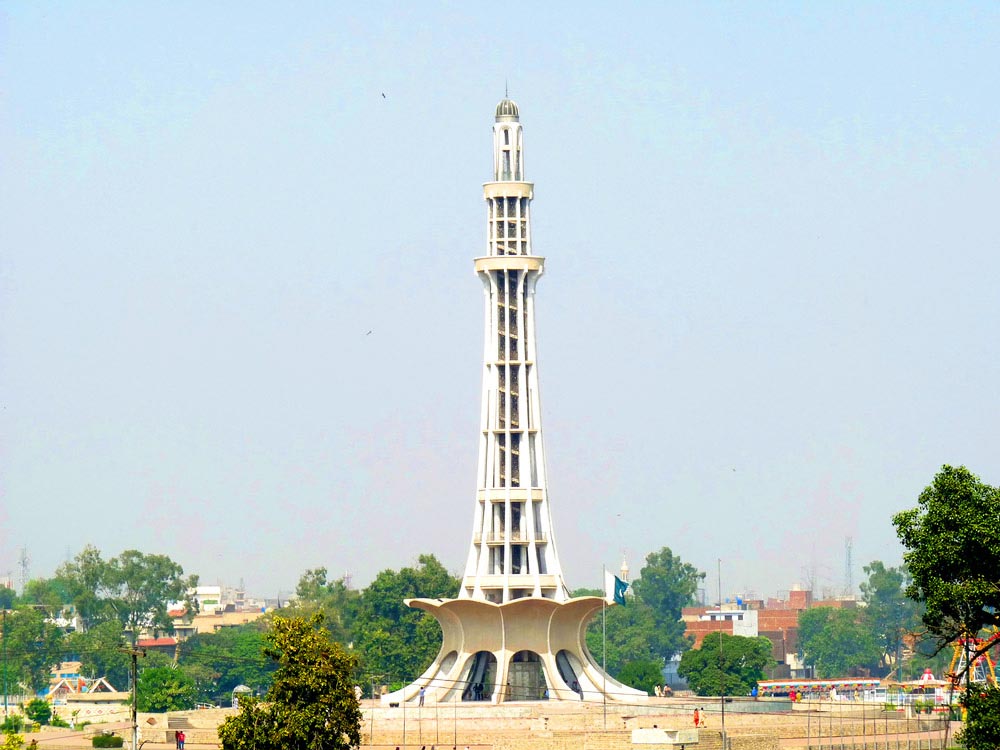 The Minar-e-Pakistan at Lahore, Pakistan

Minar-e-Pakistan is one of the most popular and must-visit tourist attractions in Lahore. It is constructed of reinforced concrete, with the floors and walls rendered in stone and marble. The Minar-e-Pakistan is also known as the Minaret of Pakistan, Pakistan Tower or Pakistan Column. It is officially recognized as the National Monument of Pakistan.

The Minar-e-Pakistan or ‘Pakistan Day Memorial‘ has been erected as a monument in commemoration of the Lahore Resolution in Iqbal Park. This was the first official declaration to establish a separate homeland for the Muslims living in the subcontinent, on March 23, 1940. The government and people of Pakistan now celebrate this day as Pakistan Day, a national holiday, each year.

The Minar-e-Pakistan was designed by Murat Khan, an architect of Central Asia. He was a graduate of St. Petersburg University and originally belonged to Dagestan, USSR. It was built by ‘Mian Abdul Khaliq and Company’, a famous construction company. The base of the tower or minar is raised approximately four meters from the ground.

The Minar is a blend of Mughal and modern architecture. It bears a bold design. The base platform is shaped like a five-pointed star, and it encloses crescent shaped pools. It rises up to approximately 13 meters, forming a sculpted flower-like base. From this point, the Minar-e-Pakistan tapers as it rises. There are ten marble slabs of seven-feet height and two-feet width. Ninety-nine names of Allah can be seen written on the base, all around the Minar. Other inscriptions include excerpts from the speeches of Mr. Muhammad Ali Jinnah in English, the National Anthem in Urdu and Bengali and a verse by Dr. Allama Iqbal.

The Minar-e-Pakistan is a tall concrete unique minaret located in Iqbal Park in Lahore, Pakistan. You can reach the minar within half-an-hour’s drive from the AIIA (Allama Iqbal International Airport). Either take a taxi or board on a bus to reach the minar.

The best time to visit Pakistan is during the winters, as summers are very hot.