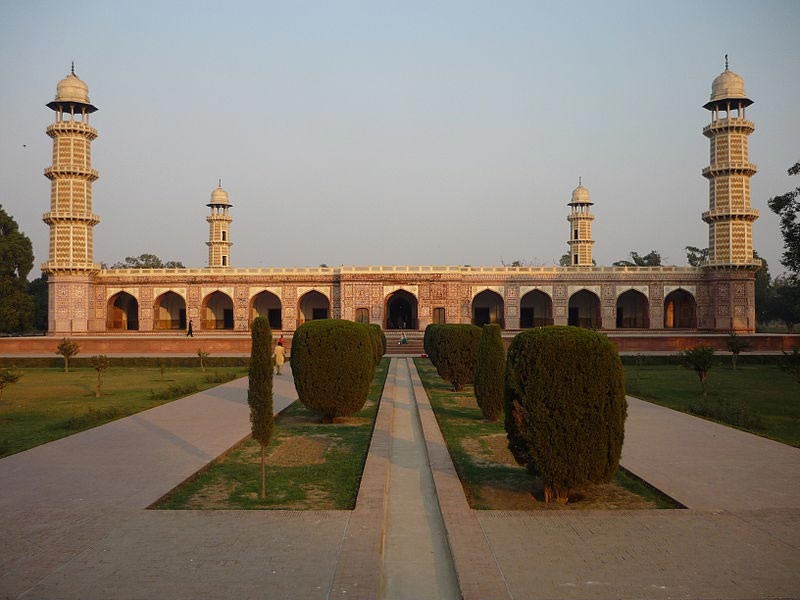 Pavilion of the Jahangir’s Tomb at Lahore, Pakistan

Tomb of Jahangir is one of the most popular tourist attractions in Lahore, Pakistan. Jahangir was a Mughal Emperor who ruled from 1605 to 1627. The mausoleum of Jahangir was constructed ten years after his death. The tomb was built by his son Shah Jahan inside the walled garden of Empress Noor Jahan, Bagh-e-Dil Kusha, on the bank of the river Ravi in Lahore. One can enter Jahangir’s Tomb in Lahore through the large northern and southern gates. The southern gate of the tomb looks magnificent with a red Sikri sandstone covering decorated with white marble inlay.

The white marble of the mausoleum of Jahangir is beautified with floral marble inlay and consists of an arcaded platform or takhgah that measures 84-square-meters in area. There is an octagonal minaret, rising in five segments, erected on each corner of the mausoleum. Chevrons of pink and white marble have been used to adorn the shaft of the minarets, each of which is crowned with a domed kiosk.

The grounds of the tomb are laid out in the classical Charbagh pattern, comprising of bisecting perpendicular paths. There are openings on each of the four sides of the platform that pass through long corridors to a central, octagonal crypt that contains the marble cenotaph resting on a platform called the chabutra. This marble cenotaph is considered as one of the finest in Pakistan and is a supreme instance of Mughal architecture. The cenotaph in the Tomb of Jahangir is inlaid with precious stones that have been set in naturalistic floral patterns.

The black calligraphy inscriptions on this cenotaph give the date of Jahangir’s death, and the 99 names of God. Originally, this crypt comprised of two floors. In fact, one can still see a platform built on top of the large square one below. By what is left of the once magnificent marble screen, you can make out that it was once enclosed, and there are traces that indicate that a second cenotaph might have stood there. However, according to popular beliefs, the second-story remained unroofed as Jahangir, like his ancestor Babur, had requested that his tomb be left open to the sky. There is a small mosque located to the western side of Jahangir’s Tomb.

Where is Tomb of Jahangir?

The Tomb of Jahangir is located near the town of Shahdara Bagh in Lahore. The tomb can be reached by an approximately 30-minute drive from Lahore Airport.

The best time to visit Jahangir’s Tomb is during winter and autumn, as during these months Pakistan experiences a pleasant climate.

The entry ticket for foreigners costs PKR (Pakistani Rupee) 200, while for Pakistani citizens, it is PKR 10.

More on Tomb of Jahangir