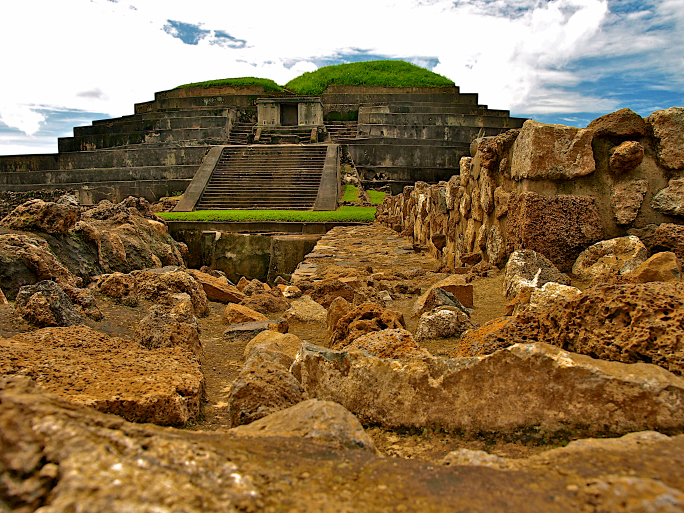 The Mayan ruins of Tazumal

The land of the lakes and volcanoes, has a hidden gem for historians and archaeologists in the form of the Mayan ruin, Tazumal is part of the larger archaeological zone of Chalchuapa. Tazumal in English means ‘the place where people are burnt’. Not surprisingly then, we can find tombs, pyramids and temples at this Mayan site. There is also evidence of an advanced water drainage system.

The Tazumal site has been extensively restored, and holds a place of national importance. Lately, it has even featured on the stamps of El Salvador. Though, if archaeology does not hold much interest for you, and you have already visited the Mayan ruins in the neighboring countries, this place may not stand out as a must-visit site in your itinerary. However, El Salvador being a small country, and the place being pretty inexpensive to visit, it is best to make a short trip to Tazumal.

Tazumal has been formally studied and restored by Stanley H Boggs in 1940. The pyramids were made of stone and abode (a kind of clay) with a layering of lime plaster. In an attempt to recreate the original look, he made walls, floors and a staircase. The structures have also been cemented in some places for preservation.

The archaeological remains point to a civilization in existence during 100AD to 1200AD.

There are shops selling artifacts just outside the ruins of Tazumal. For a more interesting and educative tour of Tazumal, it is best to hire a guide who can give an insight on the history of the Mayan civilization in Tazumal and subtle architectural differences between different Mayan sites, which elude the untrained eye.

Where is El Tazumal ?

The dry season from November to March, would be ideal for a trip to the ruins of Tazumal. Avoid the rainy season in this tropical location, to stay safe from mosquitoes and the scorching summer heat.

The site remains open from Tuesdays through Sundays from 9 am to 4 pm.

A small entry fee will give you access to the archaeological park comprising the ruins of Tazumal, Casa Blanca and the site museum.

What are the interesting places to visit around Tazumal?
Tazumal is one of the many attractions in El Salvador. Other places to visit are Lake Coatepeque, a one-of-a-kind volcanic lake, Estadio Cuscatlan, the biggest stadium in Central America, the national park El Boqueron and San Salvador, the capital city of El Salvador.