Home » The Great Sphinx of Giza

The Great Sphinx of Giza 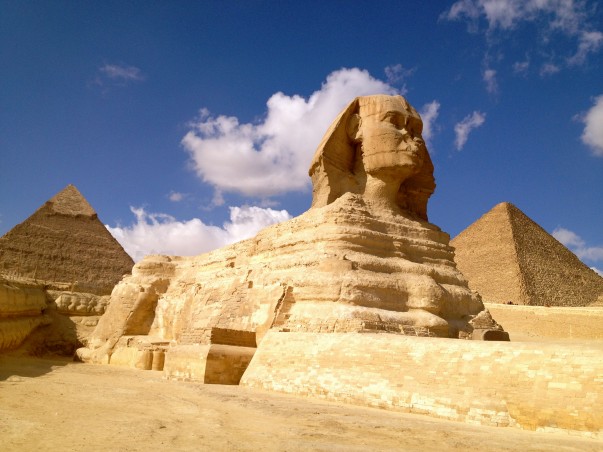 The Great Sphinx of Giza is colossal! Once you see it with your own eyes, it's easy to see why it's a national symbol of Egypt, both ancient and modern. It cuts such an imposing, not to mention regal, figure against the barren desert landscape.

The Great Sphinx is located towards the northeast of Khafre's Valley Temple. Egyptologists believe that Khafre's workers were told to shape the stone into the lion and give it their king's face over 4,500 years ago. The only evidence suggesting it's Khafre's face is the fact that his name is mentioned on the Dream Stele, which sits between the paws of the statue.

The word "sphinx" means 'strangler'. It was first used by the Greeks to describe a creature that had a woman's head, a lion's body and the wings of a bird.

Like with many other ancient constructions in Egypt, the Sphinx has a unique relationship with the sun. Not only does it face the rising sun with a temple, the lion itself represents a solar symbol coupled with the royalty’s head that stands for power and strength and the intelligence of the pharaoh. Many historians suggest this symbolism has survived for more than two and a half millennia in ancient Egyptian civilization. Even today it makes sense so it is amazing to imagine how advanced the ancient Egyptians were. Not just in terms of having the ability to construct such huge monuments without the means we have today, but also on a level of a more intangible intellect.

Know all about extraordinary Places to Visit in Egypt