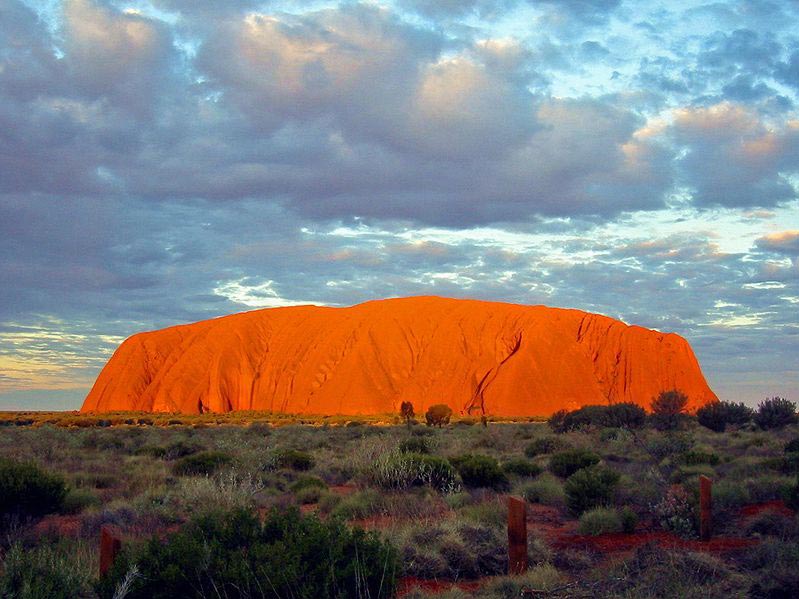 Uluru (Ayers Rock) is one of many sites in Australia that reflects the Aboriginal culture of the country. Ayers Rock is a part of the Uluru-Kata Tjuta National Park. The name of the park is derived from the Aboriginal language; the words “Kata Tjuta”, actually mean “many heads”. Being replete with deep gorges and enchanting valleys, the entire region is a paradise for nature lovers. The whole park is looked after by the Aboriginals, known in the area as Anangus. They think that the park was created by their ancestors and believe that it is their duty to keep the Aboriginal tradition alive.

A sacred site of the local Aboriginal tribes, Uluru (named Ayers Rock by European colonists) is a natural landmark of Australia that has come to represent the nation and its native ancestry. Made primarily of coarse-grained arkose (a kind of sandstone), the rock has a reddish appearance, which often varies at sunrise and sunset. The largest monolith in the world is one of the chief attractions of the park. Rock climbing is not allowed as the Aboriginals consider the rock to be sacred. You can buy a memento of the place by visiting the Maruku Arts and Crafts shop that sells Aboriginal artifacts, and you can also learn more about the Aboriginal culture by seeing performances by local dancers and musicians.

The Uluru is also a haven for bird lovers and around 21 species of mammals have been found near Uluru. The caves in Uluru are also home to about seven species of bats. Looking at the number of extinct and endangered species near Uluru, the authorities are taking steps for the reintroduction of the locally extinct animals such as Black-flanked Rock-wallaby, Common Bushtail Possum, and the Bilby.

Four types of flora can be found at the park, viz. Punu (trees), Puti (shrubs), Tjulpun-tjulpunpa (flowers) and Ukiri (grasses). Centralian Bloodwood and Mulga are the two species of trees found in the park.

There are several myths and legends associated with Uluru. One of the accounts mentioned in the Norbert Brockman’s (1997) Encyclopedia of Sacred Places states that many serpents fighting around the rock scarred it.

Located to the west of the Uluru are the Mount Olgas, which comprise of a collection of 36 huge rocks. According to geologists the Mt. Olgas initially consisted of a single rock, but then erosion resulted in the division of the single rock into 36 separate rocks. Renowned for rock engravings, the Olgas feature two well-known walking paths, the Valley of the Winds and the Olga Gorge.

Where is Uluru (Ayers Rock)?

Uluru (Ayers Rock) is a part of the Uluru-Kata Tjuta National Park located in Australia’s Outback in the Northern Territory. It takes around 40 minutes to reach the park from Avis Ayers Rock Connellan Airport by Lasseter Highway.

It can be visited year-round, but Australia’s summer in December and January brings with it hot desert temperatures. Autumn and winter are perfect times to visit, as the daytime temperatures are better, although the desert nights can get very cold.

The park housing the Uluru (Ayers Rock) is open at the following times:

Photo By Thomas Schoch [GFDL or CC-BY-SA-3.0], via Wikimedia Commons