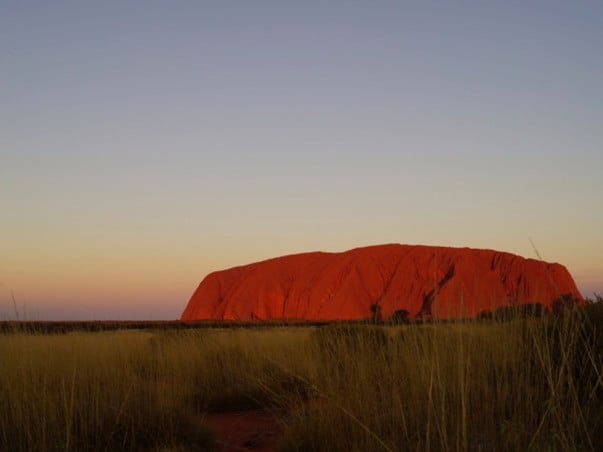 An imposing landmark in Australia, the Ayers Rock is a massive sandstone monolith in the Uluru-Kata Tjuta National Park, renowned for its structural composition, spiritual significance and views. It is known among the native aborigines as Uluru (literally meaning ‘Earth mother’). The land around Ayers Rock is in fact owned by an aboriginal clan named Pitjantjatjara. The aborigines worship this natural marvel and consider it a ‘symbol of creation’. Located almost at the center of the island continent, the Ayers Rock is surrounded by the distinctive ‘outback’ landscape of the Simpson Desert, which is home to about 21 native mammal species like the Brushtail Possum and Bilby.

Recognized as one of the oldest rocks on the planet, the Ayers Rock is a UNESCO World Heritage Site (since 1987). A popular activity tourists enjoy here involves watching the rock at the time of sunrise and sunset. They can also climb the rock, but aborigines do not support this activity. They believe the flat summit of the rock was spiritual, where their ancestors performed religious ceremonies.

The monumental structure of the Ayers Rock  has evolved since the time it took shape under the ocean (the time when the Australia we know was still underwater). The formation story starts about 600 million years ago, and goes like this - sand deposited and piled underwater, the loose deposit hardened over time to form ‘sandstone’, and when the land came on the surface, wind and rain weathered it to the shape and size of the Rock as we know it today. The structure that stands in the present has a height of about 348 meters and a circumference of over 9 kilometers. An interesting fact is that there is about 2.5 km of the Rock still buried underground!

The original inhabitants of the land around Ayers Rock were the Anangu aborigines about 10,000 years ago. It was in the 1870s when white men first saw this beautiful monolith that William Gosse gave it the name ‘Ayers Rock’ (1873), dedicating it to the then Chief Secretary of South Australia – Sir Henry Ayers. At present, Uluru / Ayers Rock is its official name to reflect the sentiments of the local Aborigine community.

Ayers Rock is a photogenic structure with a beautiful sandy background. Its red ‘burnt terracotta’ like color with parallel grooves is something that you will love capturing with your camera. But, what makes the view all the more fantastic is when you are seeing it during sunrise and sunset. At sunrise, the terracotta tinge of the Rock intensifies and makes it look like it is in flames. When you see it during sunset, the view changes considerably – the giant monolith, to the eye of the beholder, looks blue or purplish. This breathtaking sight is enchanting and memorable.

Ayers Rock is a favorite subject for mythological stories among the Aborigines. According to one such legend the Rock rose from the ocean to revolt against a bloody battle happening at that time on the shores. That is perhaps how they explain its ‘redness’.

If you think there is only one rock that looks like Uluru, you are partly correct. The truth is Australia has a number of natural structures that looks almost like Ayers. One of these is Kata Tjuta (also known as the Olgas) that is about 35 kms to the west of Uluru. It is actually a collection of closely positioned massive rocks that originated out of one monolith. Another natural structure is Mount Augustus, 1,106 meters tall (more than double in height as compared to the Ayers Rock) and located in Western Australia. It is made of sandstone and a type of conglomerate. The fame of Ayers Rock is from the fact that it is a truly ‘singular’ monolith and has a unique composition of feldspar abundant arkose-sandstone that gives it the distinctive red color.

Know more about the Uluru Rocks at Ayers Rock, Australia | SeaWorld In Australia