Home » 5 Restaurants around the world that serve Insects as delicacies

5 Restaurants around the world that serve Insects as delicacies 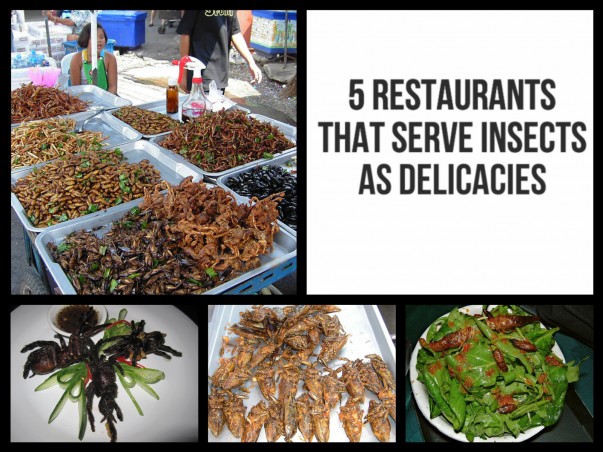 You might still go 'yuck' at the idea of chewing on hairy insect legs, but fact is that insects are eaten in 80% of the world's nations.

Entomophagy or 'eating insects as food' is being widely considered (even by people around you) as a viable solution to the rising food crisis worldwide. Insects are a rich source of proteins, vitamins and minerals, and are much easier to harvest in comparison to other livestock. They need much less rearing space than conventional livestock, consume a sixth of what cattle would, to produce the same amount of protein, and they emit far less greenhouse gases and ammonia. In short, it is high time you developed a taste for the bug.

So, let us take a look at a few famous restaurants serving insect delicacies. This list is just a starter. The number of classy restaurants serving insects is increasing by the day. Just think of the bugs as seafood on land. And though you may not happily crunching ant-legs or discussing the latest cricket recipe with your mother-in-law any time soon, you could definitely give it a start.

A Bug Buffet For a Newbie - Bug Appetit, New Orleans

If you are new to the taste of bugs, it will do you good to start with a bug buffet. Just standing there soaking in the color and texture of the tiny bugs, and looking at gastronomes nod their heads in delight, would help you shake off your initial inhibitions. Take a bite of the six legged salsa or help your daughter to a serving of chocolate chirp cookies. Try the Bug Buffet at Audobon Nature Institute's Bug Appetit at New Orleans. And, if you have the stomach for it, sit and watch the chef prepare your bug menu.

Cambodian cuisine, referred to as Khmer cuisine, is famous for gentle juxtaposition of complementing flavors in a single meal. And spiders and insects figure high on the list of Cambodian delicacies. Romdeng, a very popular restaurant in Phnom Penh, serves tarantula spiders in pepper sauce. The spiders taste just like soft crab meat. The dish is a big hit, even with first-time spider eaters. And if you so wish, you may also pet a live tarantula. So, pet your pet and eat it too!

Delicious Inn in Hong Kong is like any other busy Chinese restaurant in the area, except they serve you cocoons, meal worms and water beetles-all of them deep fried. As if all of that wasn't enough for a day, they have donkey meat on the menu too.

The bug delicacies here are very costly as they are imported from China. And just in case the sight of bugs on your plate reminds you of the ones you squatted at home, chill. These bugs have been dead a long time, as they are imported dead from China. The bee cocoon tastes just like spicy french fries, crisp on the outside and mushy inside. But be warned. Do not expect to blend in with a bunch of local eaters happily grinding insect shells between their teeth. Chances are, they will not even be aware of the bugs on the menu. And you will make quite a sight tearing away at the legs and heads of the wretched creatures.

Archipelago is a must visit if you are the kind who loves to entertain in style and are constantly on the lookout for new ways to tantalize your palate. The restaurant serves a huge array of exotic dishes starting from insects to animals. Try crickets on couscous or the meal worm and cricket salad. You can even indulge your sweet tooth with a bumblebee dessert in the end. And, if you are still hungry for more, you can try the kangaroo meat on skewers. This restaurant has been awarded 'best for romance' in the Open Table Diners' Choice Awards 2014. So, bring along a date to turn your palatal adventure into a romantic one as well.

Dump The Sausage For The Grasshopper, Soda Restaurant, Berlin

Chef Lars Scheuble of Soda Restaurant, Berlin, decided that it was time to move away from the same old and incorporate something exciting into the menu, like insects. His colleagues at the restaurant were initially shocked at the proposition, but then decided to give it a try. Chef Lars says that if people can try insects while holidaying in Thailand, they can also try them back home. However, he does not sell them simply as fried snacks, but as elaborately prepared dishes. Some of these dishes are cockroach pasta, grasshopper and locust couscous and sauteed maggots with green leaves. The insects are bought alive and killed just before they are cooked. The insect menu was such a hit here that for three days the restaurant served only the insect menu items.