Home » Most Weirdest Foods Around the World

Yesterday's 'disgusting' is today's 'cool' and will be 'passe' tomorrow. Food has remained an area where inhibitions are the strongest. The mere mention of pork is sacrilege to a Jew, a devout Hindu will be scandalized out of his wits at the sight of a beautifully done steak, and you rather not bring up the question of a drink before a follower of the book of Mormon. And yet, when faced with the quintessential challenge of survival, mankind has been known to resort to cannibalism - not so kind after all.

Our weird-o-meter has found 5 most weird food items the sight of which (and the knowledge of what goes into it) will make your gut churn. But do not jump to conclusions yet, since you never know when they might make an appearance at your table, and you may simply have to oblige.

These are rotten eggs, not a century old, though, but definitely a few months old. They look beautiful and revolting at the same time, smell awful and taste just like hard-boiled eggs.

Procedure: The eggs are immersed in a mixture of clay, ash and quicklime for several months. The yolk turns blackish-green, the egg-white is no longer white and is a slimy copper brown, and it gives off a putrid smell of sulfur and ammonia.

Remember: This is a 'curing' process just the same we use in pickles, meat and fish. So why should eggs make your eyes pop?

Beware: As many as 30 Chinese companies have been found to use toxic chemicals like industrial copper sulfate to quicken the process leading to questions about the edibility of the dish available in open markets. 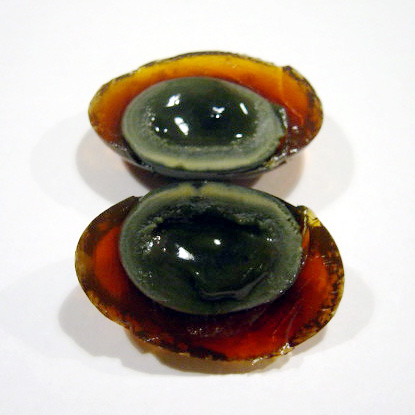 There is nothing wrong with devouring an egg. A nicely done duck roast is the star entry at any dining table. But to eat something in between, a duck embryo, where you can see the half-formed head, tiny beak and little legs of the duckling seems outright demonic.

Procedure: A fertilized egg is taken and artificially incubated for about twenty days. Then, just when life has started taking form, the egg is boiled for a long time. The boiled egg, when cracked open, clearly shows the yellow yolk on one side and the partly formed duck embryo on the other. An epicure, whose taste buds have been trained not to be belied by what their eyes see, will close his eyes and savor the soft mushy consistency of the cooked embryo in the delectable duck broth. For the rest of us, it is only a matter of minutes before we go hurling.

Remember: The Balut is very high in protein and essential fatty acids – their importance in overall health cannot be stressed enough. If claims that Balut contains embryonic stem cells are true, then we could well be on our way to discovering the fountain, err.. embryo of youth.

An aside: If Balut really is proved to have miraculous rejuvenating powers, would we not set all inhibitions aside and gulp down the half-formed little bird? I wonder what that makes us? 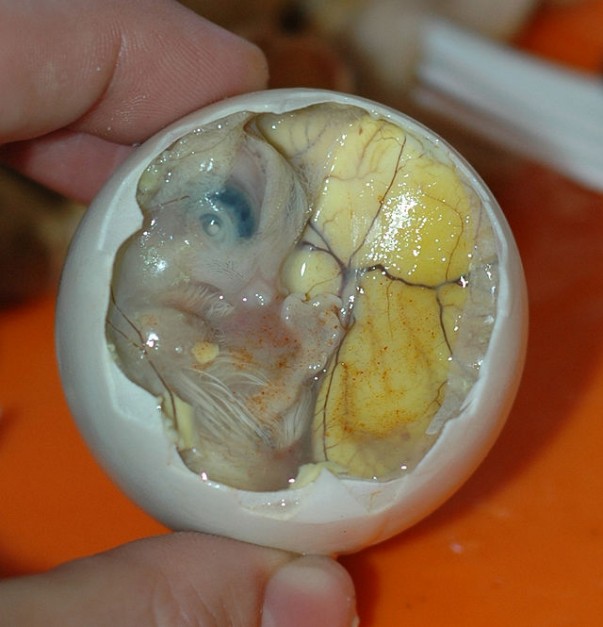 Remember the movie 'The Hills Have Eyes' where vengeful savages brutally chopped up stranded American families? If you have waited up many a late night for a repeat telecast of the movie, because somehow you can never get enough of the gore, maybe it is time you tried Shiokara, a dish where raw meat from several marine animals are served in a gravy of raw salted viscera.

Procedure: Shiokara is one of the several Japanese delicacies collectively known as Chinmi. The marine animal (mostly squid) is cleaned, skinned and sliced. Innards are kept aside. Both the innards and the meat chunks are marinated in salt for a few days before serving.

Remember: If it is of any solace to the reader (eater), you do not need to really chew on the innards. They are actually passed through a sieve so that the juices can be used for the dish and the actual gland sac is left behind. Some relief! 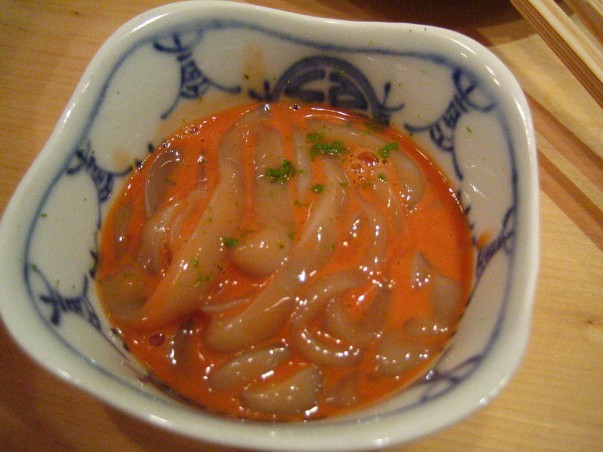 Shiokara - Made from raw meat of marine animals

This delicacy is the oriental version of the Pied Piper. But given the need for ecological preservation, and keeping in view alarming concerns of pest infestation and food scarcity, baby mice in China are not drowned in the sea but immersed in wine and turned to a 'delicacy'.

Procedure: Fifteen or so of hairless, blind and helpless wriggling baby mice are drowned alive in rice wine. The wine is left to ferment over several months while the mice, obviously, choke to death.

Remember: A draught or two of this drink is enough to get you really high, so much so that you do not mind its foul gasoline-like taste. But will you be drunk enough to not mind the dead mice floating at the bottom? We did not think so.

What a stately name! And what a stately procedure of procuring the coffee beans for this special drink. The beans are collected from elephant dung. Yes, you heard us right. Thai elephants are fed coffee beans, the protein in which are broken down by the digestive enzymes in the giant animal's stomach. The resulting coffee lacks the bitter off-putting taste characteristic of coffee and is very smooth, so smooth that it warrants the steep price of 1100 USD per kilo. You may, of course, satisfy your curiosity with a small cup for 50 USD, at one of the few luxury hotels that sell it.

Remember: A cup of this insanely priced coffee will definitely kick-start the day of a filthy rich egotist who is looking to buy some exclusivity in this flat world. 33 kilos of coffee cherries go into the making of 1 kilo of coffee. Well, so long as proponents of conservation do not raise their voice against such 'exotic' wastage, we have no worries.