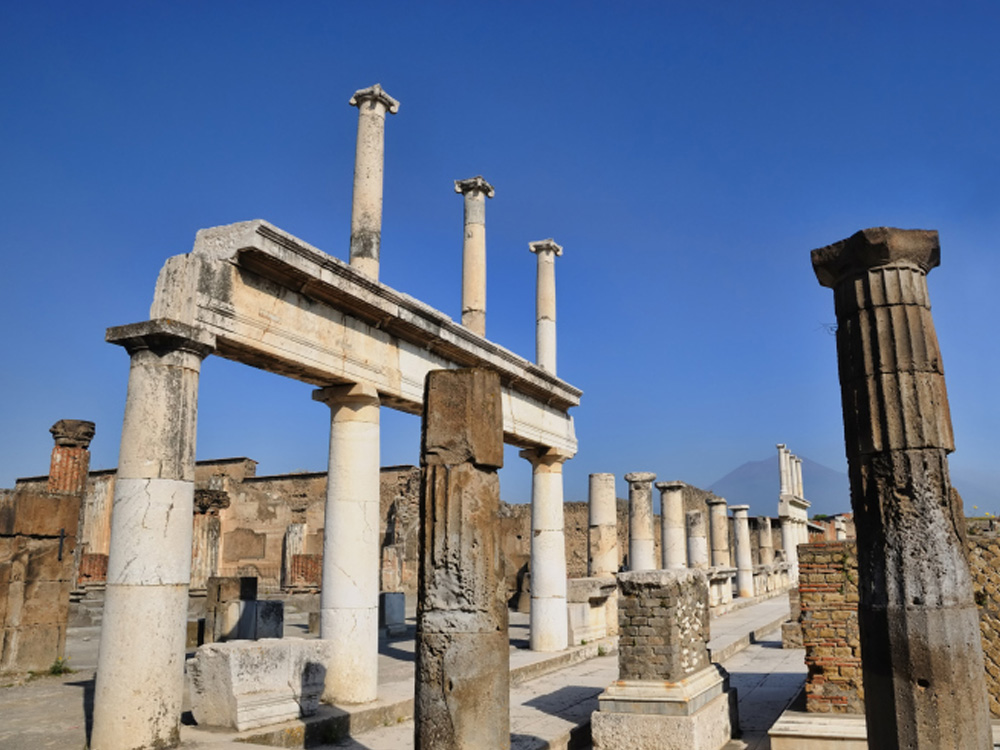 Ruins of the Forum in Pompeii, Italy Sprawled across 163 acres, just 3 miles off the Bay of Naples, Pompeii was an impressive ancient Roman city that was at its height of prosperity in the 1st century AD. It was completely ruined and destroyed on an August morning in 79 AD, due to the pyroclastic flows from Mount Vesuvius, which is 8 miles away. Located near Naples in the volcanic region of Campania, it is an archaeological site that was hidden below about 20 feet of volcanic debris until 1599. Once excavation started in the mid-18th century, the world came to know more about ancient Rome, its culture, beliefs and architectural skills.

In the present, Pompeii is listed among the top tourist destinations in Italy. In addition to being a UNESCO World Heritage Site, this city offers visitors a chance to roam around and see its amphitheaters, public baths, government buildings, temples, and small houses and large villas with courtyards. Official figures suggest a yearly visitation of more than 2.5 million global tourists.

Archaeologists believe that Pompeii was founded around 600 BC by the Oscans in the Pre-Roman era. In those days, it was a trading sea town where the water came till the gates, the point which is known as Porta Marina today. The city rose economically and with money came people from nearby kingdoms. Pompeii was conquered by the Etruscans in the 6th century BC, Cumae (a Greek colony) in the early 5th century BC, Samnites in the late 5th century BC, and later by the Roman ruler Lucius Cornelius Sulla in the 1st century BC. Each conquest brought new cultures and architectural skills to the city.

At the time Pompeii went under the proverbial volcanic ‘axe’ in 79 AD, it had already experienced a number of major to minor earthquakes. The people although were completely unaware of the volcanic invasion when it came. Pliny the Younger’s accounts of the fateful day give historians a better understanding of the events occurring in Pompeii in 79 AD. At the end of that day, the city was submerged in ash and pumice. This preserved its streets, buildings, everyday objects, and even the citizens for almost 2,000 years. On excavation, the decomposed bodies of humans could be recreated by filling the volcanic void with plaster. The buildings and paved streets could be well studied with their inscriptions and carvings. Notable buildings in Pompeii include the Forum, public baths (separate for men and women), shops (selling different items), temples, fountains, flour mills, bakeries, and brothels. The site, at present, still attracts archaeologists for further excavations and rediscovery of this awe-inspiring lost city.

Once you’ve taken your ticket to tour Pompeii and entered Porta Marina you can walk straight and see this large main square. This stands at the intersection of two main streets. Even though the site is ruined you can sense its grandeur with a piazza, pedestals, and several statues. The Forum was a commercial and political center for the Pompeiians.

At one end of the Forum stands the Temple of Jupiter with six columns on a platform. While admiring the temple-ruin you can also see Mount Vesuvius in the background hovering on this archaeological site reminding you of the time when all ended in this ancient thriving city. Historians believe Jupiter was the supreme god in Pompeii.

While roaming around the streets of Pompeii you will come across a number of homes. These have a similar structure in terms of courtyards and windows. You can find very few windows in the houses, common inner courtyards, and decorations on the walls and floors. Prominent houses you can visit are those of the Tragic Poet, Menander, Faun, Julia Felix and Vettii.

Your tour to Pompeii is incomplete without a visit to the Archaeological Museum in the city of Naples. This museum houses all the items pertaining to the art and everyday life of the citizens of Pompeii retrieved from the ancient site during various excavations.