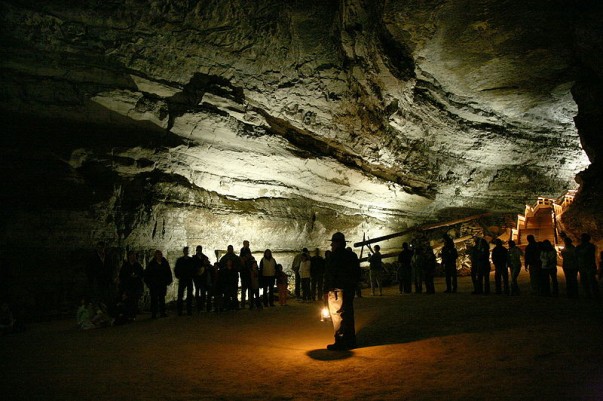 Mammoth Cave of Kentucky, US is among the longest cave systems in the world

True to its name, Mammoth Cave is an extremely long and extensive cave system under the Flint Ridge in south-central Kentucky (US). Its depth or total length is still unknown but explorers have discovered over 400 miles of the complex labyrinth inside and are treading and marking new pathways regularly. The entire area (52,830 acres!) of the cave has been declared a national park (in 1941) and an International Biosphere Reserve (in 1990) to preserve its natural state and allow people from around the world to experience this unbelievable creation of nature. Today, a UNESCO World Heritage Site, the Mammoth Cave’s length is incomparable to any other cave system in the world. The closest ones are Sistema Sac Actunand the Sistema Ox Bel Ha cave systems in Mexico, though they are not even half the Mammoth Cave’s length.

The Mammoth Cave not only features cavernous characteristics like stalactites, stalagmites, and endemic wildlife, it also tells a human story, almost 4,000 years old. Popular sites seen in the Cave includes the Frozen Niagara, Karnak, Fat Man’s Misery, Rotunda, and the Grand Avenue. Tourists are offered a variety of tour options depending on time and distance. The Wild Cave Tour is a favorite among fit adventurers as it involves traveling five miles inside into utter darkness (so, of course you’ll be using a torch), and some of it is by crawling on your stomach!

The state of Kentucky is renowned for its caves. It has about 15 cave systems, many of which are listed among the longest in the world. The Flint Ridge plateau, in Kentucky, has the ideal geology for a cave system. Its surface sandstone and shale layers remain unaffected by water, but the underlying limestone layers of several hundred feet allow the acidic groundwater to dissolve through them and from underground caves. This process has been occurring since pre-historic times. The two main rivers feeding into the cave walls are the Green and Nolin Rivers. These rivers move down through sinkholes forming underground rivers, which become the breeding-ground for cavernous wildlife that includes endangered aquatic animals like the Eyeless Kentucky Cave Shrimp, Indiana Eyeless Crayfish, and the Southern Cave Fish. Apart from water creatures, the cave also has a variety of bats. Notable ones include the Eastern Pipistrelle Bat and the Indiana Bat.

The human history in the Mammoth Cave starts about 4,000 years ago when natives discovered it out of curiosity. They soon realized its mineral content (like saltpeter and limestone) and the caves began echoing mining sounds for the next 2,000 years. After the European settlers came to know about the cave in the 18th century, the site became associated with legends, remarkable discoveries like that of a Native American Mummy, and further explorations. It is believed that the Cave started receiving tourists from as early as 1816, making it one of the oldest tourist attractions in North America. The traditional way to see the cave was by illuminating it with grease oil lamps.

Before entering the Mammoth Cave, you can spend some time at the Old Guide’s Cemetery, which is the resting place of the guides of the cave. The most famous of all was Stephen Bishop, an African American slave-turned-explorer. His style of guiding tourists inside the cave was the most popular among the guides. He is also believed to have mapped the extensive interlinked passages inside the cave. The cemetery also has the graves of patients who died of tuberculosis when the cave was turned into a hospital during the tuberculosis epidemic of the early 19th century.

The Mammoth Cave National Park boasts of a rich ecosystem besides the cave. Its rivers, Green and Nolin, offers boating and fishing opportunities. You can enjoy camping in the four designated camping grounds inside the national park, namely ‘Maple Springs’, ‘Headquarters’, ‘Dennison Ferry’, and ‘Houchin's Ferry’. You can also enjoy, other activities like hiking, nature trailing, and horseback riding.