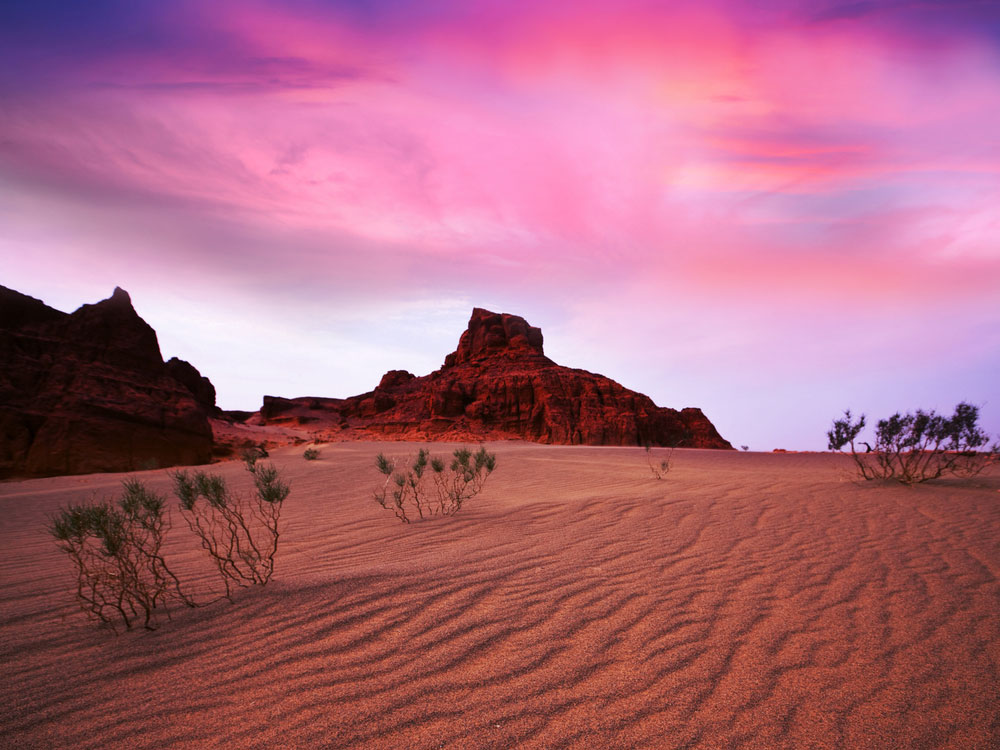 Spanning the southern areas of Mongolia, and the north and north western areas of China, the Gobi Desert is a cold desert, characterized by varying landscapes with more bare rock than sand. The magnificent landscapes include salt ponds, canyons, desert basins, and rocky mountain ranges. It covers about 1.3 million sq km of the Asian continent, making it the largest arid region here, and the fifth largest in the world. In addition, earth scientists believe that the desert is expanding into the grasslands in China, due to increased dust storms, by a process named desertification.

The major part of the Gobi Desert is located on a plateau at an altitude of about 1,500 m above sea level. Owing to this and the fact that the Himalayas, to its south, block the rain-clad winds, the region is mostly dry with scorching summers and frosty winters. Snow during the winters in Gobi is not uncommon, especially between January and February.

Interesting Facts about the Gobi Desert

Literally meaning a ‘waterless region’, Gobi features more than an arid expanse in Central Asia. Its historical and anthropological importance is far greater than one can imagine. It is, in fact, best known for being the site where dinosaur eggs were discovered the first time by Roy Chapman Andrews, an American explorer. Even today adventurers can find dinosaur eggs in the remote areas of the Desert. In ancient times, between the 13th and 14th centuries, the Gobi Desert was part of the Mongol Empire, which is famous for being the ‘largest contiguous land empire’ in world history. In the present, Mongols still live a nomadic life here and are culturally the same as they were in the ancient period. Another historical fact about the Gobi is that many of the important cities like Old Turpan, Hami and Dunhuang fall in the Silk Road taken by merchant traveler Marco Polo in his journey from Venice through Asia and back.

The Gobi Desert today is one of the major sites for extracting fossil fuels in the planet. It is also well known for its wildlife. The flora found here have xerophytic adaptation owing to the only 7 inches of rainfall each year (as compared to the Amazon that gets over nine feet of rainfall!). The plants have reduced or no leaves to reduce moisture-loss and long roots that increase the surface area of water absorption from the varying depths of the earth. Saxaul is a small tree commonly found in the Gobi. Other plants found here are wild onion, wild garlic, saltwort and wormwood. The animals in the desert obtain water stored in the plants. The wildlife found here includes snow leopards, Mongolian wild asses, black-tailed gazelles, and the famous Bactrian camels. Camel rides are considered as the best means to travel and experience the Gobi Desert.

If you are on the lookout for dinosaur fossils, the Flaming Cliffs is a must-visit place for you. Located in the north-western area of Gobi, in the Nemegt Basin, the Flaming Cliffs or Bayanzag are sand formations that evoke an intense look of burning flames, especially when the sun shines on them.

This autonomous province of China is recognized to be the site where the Oscar nominated movie on the life of Genghis Khan, Mongol, was filmed. You can have a wonderful vacation experiencing the beauteous arid Gobi landscape. You can stay in a Yurt (or Ger) - these are tents especially built for living in the harsh weather of the Gobi Desert. You can also visit the Inner Mongolia Museum in Hohhot (Inner Mongolia’s capital city), which has an exceptional display of dinosaur skeletons, objects associated with Genghis Khan, and bone-carved artifacts that depict events in Mongolian history.

Take a quiz on Desert