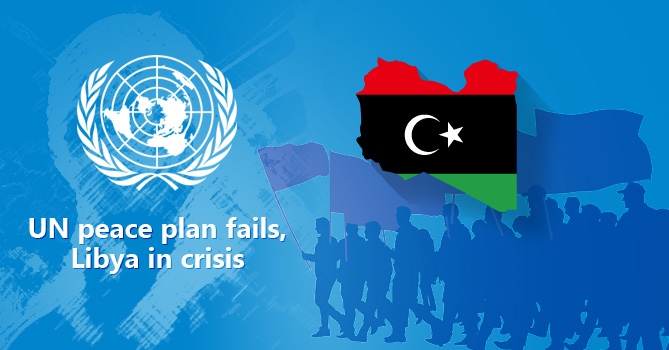 Libyans, it appears, will not get rid of the crisis soon. Though the UN has handed over Libya a peace plan that on implementation promises to end chaos it is afflicted with since the fall of dictator Muammar Gaddafi in 2011, yet no one is ready to support it within the North African country. Drafted by the UN envoy Bernardino Leon, this plan aims at bringing reconciliation between two factions, which in their efforts to control the country and its oil wealth, have pushed it deep into the crisis. While one faction called Libyan Dawn is operating its administration from Tripoli, the other led by rebels is running the government from Tobruk, a port city lying on Libya’s eastern Mediterranean coast, near the border with Egypt. The administration run by rebels from Tobruk is recognized by the international community. But both factions, instead of accepting the peace plan, have rejected it calling it a proposal of “divisions, not unity.”

Under this plan, a government with a prime minister and three deputy prime ministers, one each from east, west and south, was to be formed to run the administration across the country. After months of tough negotiations with Libyan political players and members of the civil society, the plan was drafted. But it was rejected by both factions stating that it will deepen differences among the Libyan people. Even the U.S. and major European powers have urged both sides to accept the peace deal to create a national unity government. Yet both warring sides seem to be not ready to blink over the issue of unity government. Libyan watchers feel that delay in forming a unity government will only prolong the suffering of the Libyan people and benefit terrorists seeking to take advantage of the chaos. Already, ISIS has spread its wings far and wide in the country, while factional fighting has left the country with no meaningful administration.

As a result, Libya has become synonymous with death, destruction and displacement. It has become a haven for criminals and human smugglers. According to various intelligence reports, daily hundreds of Libyan youths are recruited by ISIS for its armed fights in Iraq and Syria. These recruits are paid handsomely by ISIS whose financial system is well oiled. While controlling eastern Syria’s almost all oil-producing regions, ISIS has also a sway over oil wells and refineries of neighboring Iraq. It wants to capture oil wells of Libya too. By doing so, obviously ISIS aims to become the best-funded terrorist group in the modern history of the world. Reason behind its withstanding West-led airstrikes is attributed to slush oil wealth that it possesses. Capture of Libyan oil wealth, according to experts, will further strengthen the outfit.

In view of such scenario, several countries have appealed to Libya’s warring groups to accept the UN drafted peace plan. They are being urged to put aside their petty concerns so that this North African country’s instability could not threaten regional as well as international security. West Analysts say that both factions would not come together for better future of Libya unless they effectively ostracize and isolate belligerent figures within their own ranks. But critics consider the UN-sponsored peace plan itself as the major reason why Libya could not be rid of the crisis. They say the UN peace plan for Libya is loaded in favor of the faction which runs administration from Tobruk. This faction called House of Representatives is under the control of Khalifa Hifter, a prominent military commander who fought both for and against Gaddafi during the course of his career. Considered to be close to the West, he has spent a number of years in Northern Virginia. Another faction called Libyan Dawn does not trust Khalifa Hifter who, in order to establish himself as a strongman in the North African country (Hifter emulates Egyptian President Abdel Fattah al-Sisi), wants to purge the nation of Islamists. Given this, Libyan Dawn has put a condition that unless Tobruk-run administration first removes Hifter from its side, it would not agree to any plan for peace in the country. Tobruk faction’s political leadership is hesitant to do this. They do not like to act against Hifter being backed by Egypt and the UAE, as they know that by doing so will mean severing ties with their dominant military force on the ground. Consequently, acceptance of UN-brokered peace plan for Libya has got stuck. Before the country’s chance to come out of the crisis is severely damaged some countries have suggested that attempt should be made to isolate those who obstruct peace process. To make it possible, the UN is called upon to stop giving undue preference to Tobruk faction. The world body is also being asked to draft a new plan that is more palatable to both sides. In the midst of these developments, common Libyans are suffering as they do not know when they would get past death and destruction that have become daily dose of the North African country’s life since 2011.