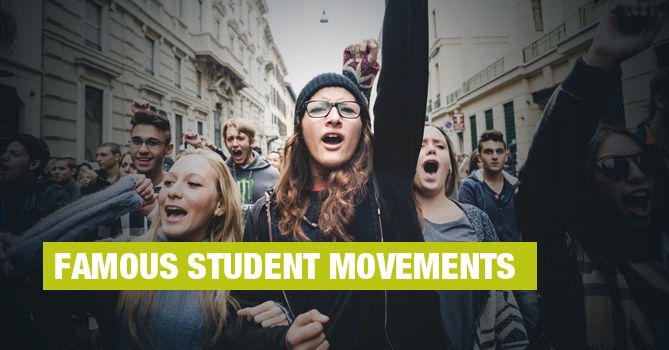 Political repression and brutal crackdown have not deterred countless students from taking to the streets demanding reforms, condemning discrimination, and voicing their support for people’s rights and democracy. They have neither winced nor wilted under the bludgeoning of military regimes. Students have stayed at the forefront of free speech, civil rights, and anti-war movements around the world. Their movements were not only aimed at transforming academic institutions but also at bringing reforms in political and social fabrics of the world.

Here are some students movements around the world whose popularity refused to wane even today.

Free Speech and Other Civil Rights Movements in the US (1960s)

A sizable revolt took shape on the campus of University of California, Berkeley, in 1964 when students defied administration and actively campaigned for volunteers to support the Civil Rights Movement. As administrators started arresting students, the student activism took the form of the Free Speech Movement (FSM). Public protests and sit-ins were organized to uphold the right to free speech and retain a student’s right to recruit for the civil rights movement. This movement became a catalyst for other protests in college campuses across the U.S. Within few years, students at Columbia University staged an uprising against racial discrimination as the administrators planned to encroach on the lands reserved for the residents of black neighborhood.

The college campuses in the US continued to be the place where blueprints for protests were incubated. The mobilization of student protesters, which started in the late 60s to oppose the Vietnam War, was further intensified in 1970 when four students at Kent State University were killed in a shooting incident during their anti-war protests. The death of the students gave further impetus to the movement and it quickly spread into a nation-wide strike forcing many colleges and universities to shut down.

The video footage of Chinese army crushing civilians under their tank is still vivid in our memories. In case you don’t know, this iconic student-led movement at the Tiananmen Square was triggered by the death of former Communist Party General Secretary Hu Yaobang. The death of a liberal reformer led to a spate of pro-democracy protests in the spring of 1989. That was the precise moment when about one million people, mostly university students, assembled at the Tiananmen Square demanding government accountability and freedom of the press. The army was called in, martial law was enforced, and the protests were forcibly suppressed. It led to the notorious massacre.

The winter of 1996 brought a wave of protests in Serbia as students took to the streets to express their concern over electoral fraud attempted by the ruling government headed by Slobodan Milošević after 1996 local elections. It’s only after the university students organized a series of peaceful protests, which lasted for three months, that Milošević accepted the victory of the opposition party. Although the protests spread over most towns in Serbia, the largest mobilization of students was seen in Belgrade, where up to 200,000 people had gathered.

Brutal suppression of public protests in 1999 brought much disgrace to Iran after police and paramilitary forces vandalized the dormitories of students who had staged a strong protest against the closure of reformist newspaper Salam. The violent attack on the students of Tehran University while they were asleep in their dormitories left many of them injured. One student was killed. With this unprecedented attack, the movement gained more support and the protests spilled over to public places. Upholding students’ rights became the ultimate aim. Although the movement was heavily crushed, yet it laid the foundation for independent student movements in Iran.

A country, which is known for its military rule and the penchant for crushing student-led dissent, tried to muffle the voice of students in March 2015 when protests against the controversial National Education Bill came to an abrupt end after the police crackdown. The new education law, according to students and independent experts, restricted academic freedoms and prohibited formation of student unions. The students of Myanmar continue to fight for amending the law even after the Myanmar’s parliament rejected most of their recommendations.