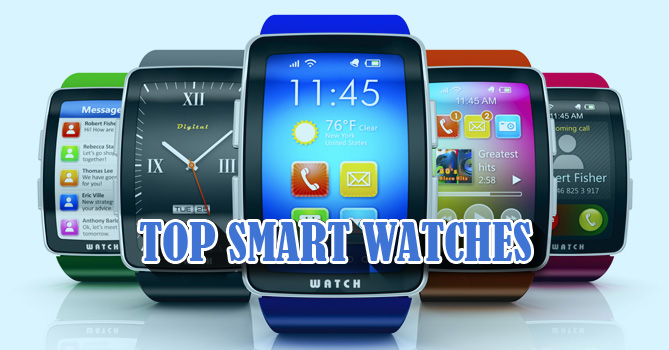 Smart watches are basically digital watches that are capable of doing much more than the old analog ones that can only track time. In a way these can be called the complete digital wrist device. With smart watches you will be able to run apps and all kinds of digital media can also be played on these. This list is inclusive of – but perhaps not limited to – radio that is streamed to Bluetooth headphones and audio tracks. A lot of these smart watches also come with touchscreens, which can be used for functions such as calculators, compasses, thermometers, and others. However, they don’t have internet connection, which is perhaps their only drawback so to speak.

Smart watches have been in existence for several decades now. One of the first wearable smartphones – SPH-WP10 – was launched in 1999 by Samsung. It could be regarded a complete phone of sorts that was being worn on the wrist. It had a monochrome LCD screen and had in-built microphones and speakers. It was 2 cm thick and 50 grams heavy. It also offered a talk time of around 90 minutes.

IBM Watchpad is also one of the earliest smart watches. It was developed together by Citizen Watch and IBM and was introduced in 2001. The main aim behind launching this phone was to gain greater insight through exploration by making a new kind of device that could provide users greater access to personal information. In a nutshell, this can be regarded as the main thought process that gave birth to the concept of these watches. It ran on Linux 2.4 and had a QVGA LCD measuring 320X240 pixel. It was also equipped with a 16 MB flash memory and an 8 MB RAM. The intelligent watch also had calendar software, accelerometer, and Bluetooth facilities.

The Fossil Wrist PDA came into being in 2002. It had a 66 MHz processor and its touchscreen display measured 160X160. It ran on Palm OS 4.1.2 and also featured an infrared port as well as a virtual keyboard. It was also capable of exchanging information with PCs. Casio is also one company that is credited with having built some of the first generation of smart watches.

Following are some of the other first-generation smart watches:

Right now, Apple Watch is regarded as the best among this particular ilk. It runs on Apple iOS and can measure your heart rate. It comes with a 272X340 color touch screen that is 1.32 inch long and offers a battery life of 18 hours. It was launched on April 2015 and can resist water till a meter. You can pay for the watch through the Apple Pay system.

Moto 360 Sport is regarded as the finest smart watch among ones that run on Android. This phone can also run on iOS and can measure your heart rate as well. It comes in two screen sizes – 1.37 inch and 1.57 inch. It has a 360X360 color touch screen. Its battery can withstand a maximum of 1.5 days of mixed use. It was launched in October 2015. It can resist water up to 1 meter.

Launched in August 2015, Pebble Time Steel offers the best battery life of up to 10 days. It is compatible with both iOS and Android phones. Its screen is basically a 144X168 color e-paper, with a length of 1.25 inch. It can resist water till 30 meters.

Tag Heuer Connected is one of the new kids on the block having been launched in November 2015. It can run on both Android and iOS. It has a 360X360 color touch screen, which is 1.5 inch long. It has an estimated battery life of 25 hours and can resist water till 1 meter. Movado Bold Motion can also be included in this category. It can run on both iOS and Android. Its screen bears the look of an analog watch face and is 44 mm.

LG Watch Urbane 2 comes with a whole array of wireless connections, inclusive of 3G and 4G. This implies that it can both take and make calls and you may not even need to take out your smartphone. This phone comes with a P-OLED display screen that measures 338 ppi and is 1.38 inch long.

Following are some other leading smart watches at the moment: