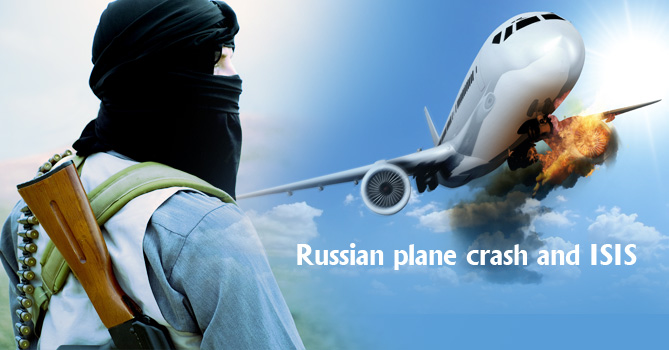 Russian authorities are mum; they are neither believing in the claims of ISIS nor the on-going murmur about the involvement of some state-sponsored hands in the downing of Russian plane over Egypt which led to the death of all 224 passengers on board. Amid claims and tide of speculations, some aviation experts’ argue that ill-fated Russian plane-A321 might have plunged down due to technical failure. Whatever may be the truth, the incident took place over sky in Sinai Peninsula in Egypt; it took place when Metrojet Flight 9268 was on its way from the Egyptian resort of Sharm el-Sheikh to St Petersburg on October 31. While investigation is going on regarding the crash, ISIS which was the first to claim the responsibility for the incident, has released a video showing five ISIS jihadists sitting outside and praising militants of the Sinai Peninsula for downing the Russian plane. The members of this banned outfit, which has so far claimed responsibility for killing thousands of people in Iraq and Syria, are also seen in that video threatening more attacks against Russia for targeting ISIS in Syria. The jihadists say their action was in retaliation to Russian attacks on ISIS.

In September, Russia carried out air strikes against rebels. Shortly after this, it also launched attacks on ISIS in Tadmur area of Syria’s Hom province. It was a radical move which showed Moscow going away from its stated position on Syria’s Bashar al-Assad regime, said to be the key backer of ISIS. Most of oil wells in Syria’s eastern region are considered to be under the control of ISIS and it is alleged that there is a tacit understanding between ISIS and the Bashar regime for such arrangement. Given this, change in Russia’s move against ISIS is seen as a major shift in Moscow’s strategy towards Syria. Making a sharp and aggressive attack, Russian fighter aircrafts pounded jihadists’ stronghold in Palmyra, an ancient Syrian city which is famous for Roman-era ruins. Earlier in October, Russian warships positioned in the Caspian Sea launched devastative 26 rockets into ISIS hideouts across Syria. In the face of such developments, claims of ISIS downing the Russian plane have given currency to the theory of jihadists-led revengeful action. But Russians as well as Americans are not ready to buy ISIS claims. Both say that jihadists do not have the capability to hit a plane flying at the height of 9,450-metres. Information with them suggests that ISIS possesses only man-portable air defense systems, incapable of hitting a target beyond 9,000-metre.

Nonetheless, such arguments are outside the realm of close scrutiny. Rather aviation experts’ have questioned the fitness-level of Russia’s ill-fated plane. In 2001, the same plane’s tail, it is said, struck a runway while landing in Cairo. At that time, the aircraft was registered with the Lebanese carrier, Middle-East Airlines. In 2013, it underwent various processes of checks and tests. Yet, not enough tests were carried out against the plane whose tail was found by rescue and search officials, miles away from the other plane wreckage. There are no clues to suggest as to what happened to the doomed Russian plane. Air traffic controllers in Egypt had not received any distress calls. But Russia Interfax news agency has quoted an unnamed source in Cairo as telling that the ill-fated passenger aircraft’s cockpit voice recorder had captured some uncharacteristic noises the moment before the flight disappeared from radar.

Built in 1997, the airbus plane A321 was operating since 2012. Before crashing, the plane had, in fact, clocked around 56,000 flight hours over the course of nearly 21,000 flights. In the meanwhile, officials from five countries have joined the investigations of the Russian plane’s crash. With this has arisen a new question on the possible role of some state actors in felling the plane. American secret agencies may have a role in the disastrous plane crash is also a theory moving thick and fast around it. Nonetheless, since early February this year, it is the fifth commercial plane crash across the world in which 481 people have so far lost their lives.

Plane shot down in Egypt was terror act, says Russia

The Russian A321 airliner that was shot down in Egypt last month was an act of terror, Russia’s security chief said. According to media reports, all 224 people on board the flight were killed. FSB chief Alexander Bortnikov told Russian President Vladimir Putin that traces of foreign explosives were found from the debris of the aircraft.