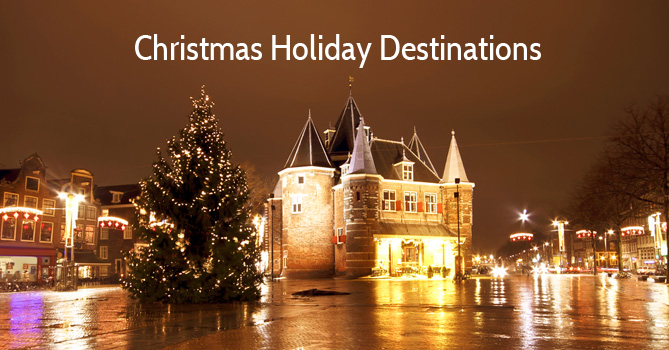 New York City is one of the best places to be during Christmas. There’s more to Christmas in this city than the Christmas tree, which is famous around the world, and Rockefeller Center. It is said that Christmas in Big Apple is much more than beautiful – it is timeless. One of the things that you need to do during Christmas in this city is take a carriage ride through Central Park. One of the star attractions of Christmas in New York is the windows at Macy’s, which is like an animation wonderland, always changing and fascinating the watchers. For people interested in watching the magnificent Christmas displays, Dyker Heights at Southern Brooklyn is the place to be.

For the Dutch Christmas means celebration on two days. On December 5, also known as Saint Nicholas’ Eve, Sinterklaas, their version of Santa Claus, gives gifts and presents to the young ones and on December 25 family gatherings happen over food. Between these two days Amsterdam is like a riot of white lights. The shopping avenues are full of people and the people hope that the canals get so frozen that they are able to enjoy their time with a skating party.

Germany is known for its various towns where the buildings, town center holiday markets, and decorations in generation are capable of creating the vibe Christmas is reputed for. However, no city or town comes close to Cologne, which has an unparalleled Christmas appeal. It has 8 separate Christmas markets that set up shop on both sides of Rhine. The biggest among these is located in front of Kolner Dam, the iconic cathedral of the city. It is said to be a great place to visit for families and has been described to be quite romantic as well. The hot and spicy wine known as gluhwein is one of the major attractions of this time.

This is also known as the Christmas hometown of the US. Here you see a wide array of shops, all decked up in Santa-related themes, and happily embracing the Christmas spirit. There are plenty of Christmas attractions as well such as the Santa Claus Museum and Santa’s Candy Castle. One can also visit the Holiday World and go on the Splashin’ Safari. The US Post Office has also played a major role in enlivening the Christmas tradition over here by sending letters, which are addressed to Santa, to this town.

Boston is a proud forbearer of the traditional customs celebrated in New England of the yore, and this comes to the fore during Christmas. You can walk around the city’s historic areas and you will see age-old traditions being observed in every nook and cranny. The town has at least 2800 functional gas lamps. At this time the shopping streets are full of trees wrapped in white lights and then there is Christmas tree located just before Faneuil Hall. It is impressively decorated and can be easily regarded as the jewel in the crown of the city’s magnificent Christmas decoration.

Lapland is located right at the southern tip of the Arctic Circle. This is why Napapiiri is perhaps rightly regarded as the Christmas capital of Europe. It is also known as the authentic base of operations for the celebrated giver of gifts. Santa Claus Village and Santa Park – the two Christmas attractions celebrate the Santa Theme and are highly popular as a result. Here people can come and visit the workshops of Santa and also purchase some merchandise. One also gets to see a proper reindeer and the big man himself visits to make it even more worthwhile.

When it comes to solemnity Rome is hard to match. As opposed to the fervent celebrations in the US, the celebrations here are fairly peaceful. This is where tradition and faith are more important than celebration itself considering its close proximity to the Vatican, the seat of Catholicism. The major attraction over here is the Mass at Parthenon. It takes place at midnight and is indeed an experience worth beholding. It also gives one a sense of intimacy as well. What further helps is that there are not too many people around and the weather is fairly pleasant as well.

San Juan in Puerto Rico is a living example of the fact that one does not need snow or scarves to have a proper Christmas celebration. During Christmas, the palm trees in the city are strung with multicolored lights thus lighting up the city magnificently. Anyone visiting San Juan at this time should not miss out on culinary delicacies like the pork shoulder and coquito, which resembles the eggnog in taste. The holiday season over here starts much earlier than in the US and goes on for two weeks with plenty of families getting together and parties. It continues till January 6.

Following are some more Christmas holiday destinations well-known for their thematic nature of celebrations:

Negril in Jamaica is one of the finest Christmas holiday destinations in terms of costs. It has a shoreline of 7 miles and has plenty of places where the accommodation is convenient. The town is highly popular among students for the quality of food and drink, and shopping opportunities on offer. The wine and beer here are especially popular. There are plenty of holiday homes and tourists can also take houses on rent. There are plenty of activities such as snorkeling, lounging, swimming, etc. that can make it worth while for everyone.

Following are some more commendable options in this regard: