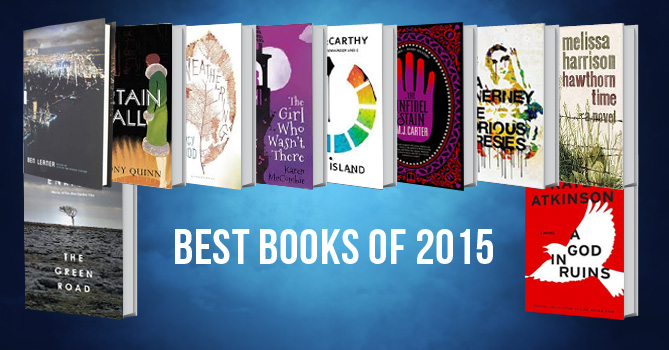 It was a great year for books and saw a number of fascinating titles by both amateur as well as seasoned writers. Here we bring to you the top ten defining books of 2015.

10:04 by Ben Lerner was one of the leading works of fiction in 2015. Published by Granta this book is 244 pages long. Critics have described the ordinariness depicted in the book to be superficial but at the same time have lauded the way it transforms itself into science fiction in an almost secretive manner. It was regarded as one of the better novels of last year.

Curtain Call, written by Anthony Quinn, is 327 pages long and has been published by Jonathan Cape. This book is supposed to be one of the most exciting publications of last year with no character that has been written poorly or no scene that comes across as uninspiring. Critics have also remarked that the book is filled with phases of lyricism that just stay with the reader.

Lucy Wood has written Weathering, a 304 page book published by Bloomsbury. According to critics, the river setting creates a tumultuous, as well as gregarious, presence that acts as a commendable backdrop. The book deals with a family, showing three generations, and fuses the story in a language that is so good that it seems to be from another world.

The Girl Who Wasn’t There

The Girl Who Wasn’t There has been written by Ferdinand von Schirach. This 224 page literary work has been published by Little Brown. It has been described as a novel that is more akin to an efficient riddle. The book is filled with gradual collection of details, building up of tensions, and misdirections that only seem to be there in every nook and cranny. Anthea Bell, the translator, has done a great work in enhancing the appeal of the author’s prose that comes across as pointillist and cool.

Tom McCarthy has written Satin Island. This 192 page novel has been published by Jonathan Cape. The author is well known for the web of mysteries that he is able to create with his words – the exact potential of which is hard to understand – and this one is no exception either.

This 357 page novel has been written by MJ Carter and published by Fig Tree. Critics have described this book as an entertaining concoction that combines elements such as blackmail, cross-dressing, homicide, and colloquial words not many readers would have encountered before.

The Glorious Heresies has been penned by Lisa McInerney and spans 384 pages. John Murray has published it. This is the first novel of the author and critics have lavished praise on the same. The novel is interestingly ambivalent. It has both tender and tough moments, is lyrical and Gothic at the same time. Critics have also described the book as a state-of-the-nation novel that churns your stomach and leaves your heads spinning. The central theme of the book is the eventual crumbling of a nation.

At Hawthorn Time has been authored by Melissa Harrison. Bloomsbury has published the 288 page novel. Harrison is known to deal with themes related to nature and carries on with the trend in her second novel as well. Critics have said that she walks in the path treaded by some of the greatest writers such as Thomas Hardy, Henry Williamson, and JL Carr. The novel has been described as an edgy experience and deals with the livelihood of farmer while touching upon themes such as debt, dispersal sales, and divorce.

A God in Ruins

A God in Ruins is a 400 page novel and has been penned by Kate Atkinson. Doubleday has published the book. Critics have described the book to have one of the most overwhelming twists among all the fictional work written in the last few years. It is one of the most crucial aspects of the novel. This book has already been described as one that affects the readers in an extraordinary manner and this twist only lends poignancy to the same.

Anne Enwright has written The Green Road, a 320 page novel. Jonathan Cape has published the novel. Critics have praised the author’s talents of imagination and observation. They have also said that these qualities overshadow the radical nature of her form. One of the hallmarks of the book is that there is a certain sense of mystery to the characters since they have not been explained in totality. The characters here do not serve any authorial design as such and thus the book avoids the trap that a realist novel commonly falls into.