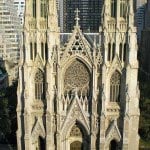 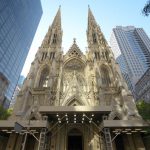 The St. Patrick’s Cathedral has been serving the people for the past 150 years and this cathedral was the brainchild of Archbishop John Hughes. Some people regarded the proposal of the construction of the Cathedral as “Hughes’ Folly” as the location of the site was in the vicinity of the wilderness. Nevertheless, the vision of Hughes and his daring efforts with the hope that this will become one of the throbbing centers of the city, made his dream come true.

The cathedral was designed by James Renwick Jr. in the Gothic Revival style. The cathedral has undergone much renovation and restructuring ever since it has been built. For instance, the stained glass windows in the Lady Chapel were added during 1912-1930 and were made in England.

The cathedral reiterates the fact that “Rome wasn’t built in a day”. It is not a matter of just one generation. The ongoing process of renovation proves that it is the work of past, present and future generations.

The music played at the St. Patrick’s Cathedral, New York is planned and there are full-time musicians as well as guest choristers and musicians who are engaged in this work. The cathedral also organizes various concerts and musical programs.

The cathedral is experiencing an extended restoration that is expected to take three years for the completion. The estimated budget of the restoration is $177 million.

Where is St. Patrick’s Cathedral ?

St. Patrick’s Cathedral is located at the merging point of 50th street and Fifth Avenue in Manhattan. The nearest airport is Dublin airport. You can also choose to reach the Cathedral via subway or a bus.

One can visit the St. Patrick’s Cathedral throughout the year. It is advisable to avoid visiting the Cathedral during the mass timings if you are a non-religious tourist. During the offering of the mass services, photography is prohibited.

The tours to the St. Patrick’s Cathedral are free of cost. You may donate according to your wish.