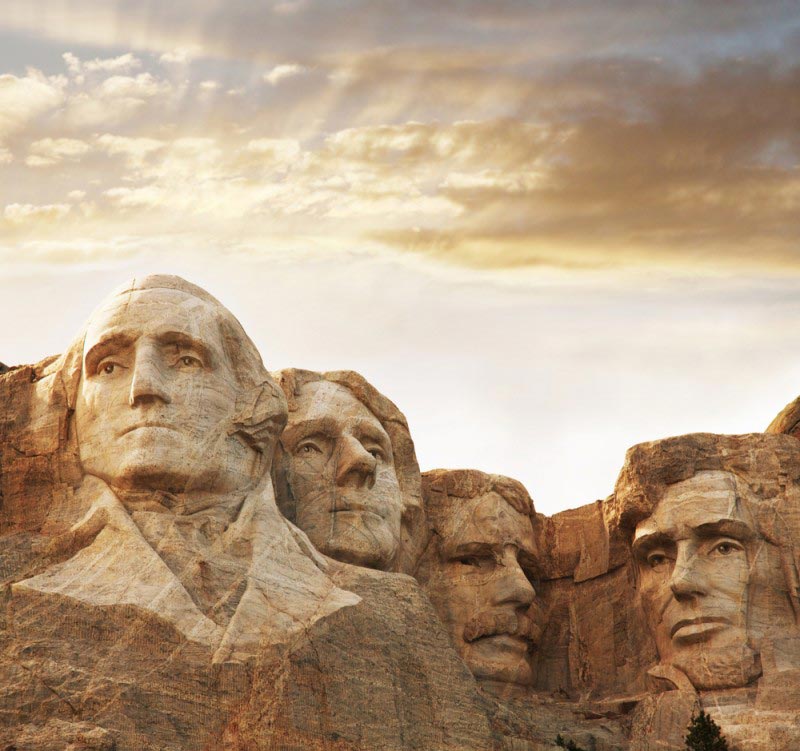 Mount Rushmore National Memorial on Mount Rushmore is located near Keystone in South Dakota, USA. It is one of the most iconic monuments representing the United States internationally. Set against the impressive granite background of the Black Hills, the huge sculptures of America’s four iconic United States presidents – George Washington, Thomas Jefferson, Theodore Roosevelt, and Abraham Lincoln – stand out in a rare display of historic grandeur. These 60-foot high carvings, 500-feet feet up the hills, were sculpted by the well-known Danish-American Gutzon Borglum and later by his son, Lincoln Borglum.

The Mount Rushmore Memorial covers 1,278 acres and is about 5,725 feet above sea level. The idea of creating the sculpture was the brainchild of Doane Robinson, a well-known South Dakota historian. Robinson believed that a mammoth carving on the Black Hills in South Dakota would attract much tourist interest in the state. He worked with John Boland, President Calvin Coolidge, Congressman William Williamson, and other leaders to secure funding. Needles was the site initially suggested to house these mammoth monuments. Gutzon Borglum, the sculptor, however believed that Mount Rushmore was a better choice due to its excellent quality granite. Robinson had initially envisaged it to feature local western heroes such as Lewis and Clark, and Buffalo Bill Cody but once again Borglum stepped in and suggested that the sculpture be given a pan-American focus. Construction work started in 1927, and the sculpture was completed in 1941. Gutzon Borglum’s death in March 1941 left the sculpture to an uncertain fate but his son Lincoln Borglum took over till the end of work in October 1941.

Nearly three million visitors are known to visit Mount Rushmore annually. The construction of the sculpture at Mt. Rushmore cost $989,992.32 in all. The cave behind the sculpture is called the “Hall of Records” and was initially intended to house the historic relics associated with the monument but could not be completed due to lack of funding. Mount Rushmore has been over seen by the National Park Service since 1933, even as the sculpture was being constructed.

Where is Mount Rushmore National Memorial ?

Mount Rushmore National Memorial is located near Keystone in South Dakota. It is surrounded by the Black Hills National Forest. Rapid City Regional Airport, located 35 miles from Mount Rushmore, is the nearest airport.

The visitor facilities at Mount Rushmore National Memorial are open through the year except on Christmas Day.

The grounds at Mount Rushmore are open for following hours: