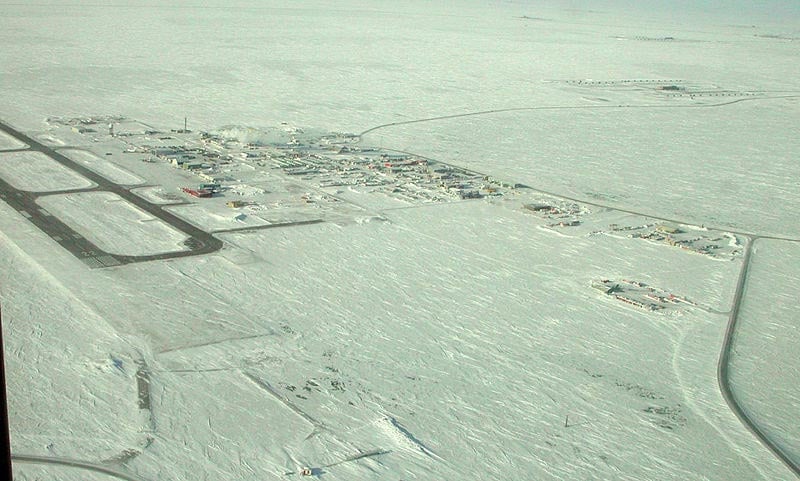 Aerial view of the Deadhorse in Alaska

Deadhorse is a small, remote community in the far north of Alaska, which exists primarily as a base for oil workers, and has more recently become a popular tourist spot. Famous for its extreme conditions, Deadhorse has featured in several recent TV shows, one of which showcased the truckers who drive through Dalton Highway – a dangerous and grueling job over rough terrain and frozen lakes, battling avalanches and whiteouts.

Visitors come to Deadhorse to experience a unique lifestyle, and to view the arctic wildlife, like grizzly and polar bears, arctic foxes, caribou, arctic squirrels, musk oxen, and hares, and a variety of waterfowl including swans, eagles, geese and gulls. Tour buses take tourists to check out the highway, communities, and the vast, harsh wilderness of Alaska.

The best way to tour Deadhorse is via tour buses that run from Fairbanks through the James Dalton Highway. It is a two-day tour, and the tourists take an overnight stop in Coldfoot.

As the town is small, it houses just one expensive general store and two fuel stations. The post office is a part of the general store.

Caroline Graham, a writer for the Dailymail, UK, online news website describes Deadhorse as a place where there are no women, no trees and no alcohol. A huge red warning sign on the notice board reads that the state has banned alcohol by law and alcohol-related crimes are punishable by a jail sentence of up to five years.

Deadhorse is situated on the northern coast of Alaska, and located at the end of the Dalton Highway. Deadhorse is part of the North Slope Borough unincorporated area next to Prudhoe Bay. You can take a direct flight to Deadhorse Airport.

With low temperatures year-round, Deadhorse experiences its warmest temperatures in the summer months, June, July, and August, which also bring longer days so visitors can experience the midnight sun. August and September are the best months to see the polar bears. The winter in Deadhorse can be deadly cold, reaching temperatures of -102 degrees Fahrenheit (-74 degrees Celsius) when the wind chill is factored in. Winter also has much shorter days, with many hours of darkness.