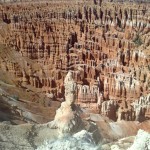 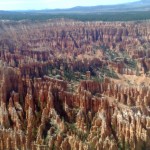 Bryce Canyon National Park in southwestern Utah is one of the best places to understand the tremendous force that Nature is. At the heart of the national park is the Bryce Canyon, a collection of huge domes or amphitheaters dug out by the multitude of short-lived streams that crisscross the region. The largest and most striking among these is the Bryce Amphitheater which spans over six square miles.

The rock spires that have been formed by the erosive effects of water and wind on the sedimentary rocks of this region are called the hoodoos. Over a million visitors head to the Bryce Canyon Park each year. While most of them come here to take a hike down the rugged trails, there are also the daring sorts who take a horseback rides down the canyon and commune with the wilderness.

The national park is located at the edge of the Paunsaugunt Plateau, the peaks tower at a height of about 8,000 to 9,000 feet from the base of the canyon. The western tableland is thickly forested while the eastern ridges feature a sharp bare drop straight to Paria Valley, 2,000 feet below.

Covering an area of over 35,835 acres, the Bryce Canyon National Park provides visitors spectacular views of the red, orange and white stone formations and of the breathtaking sunrises and sunsets that can be witnessed here. For millions of years, the rocks of the canyon have expanded and contracted to the frost and the steam giving birth to a stunning landscape and a coveted tourist destination in Utah. 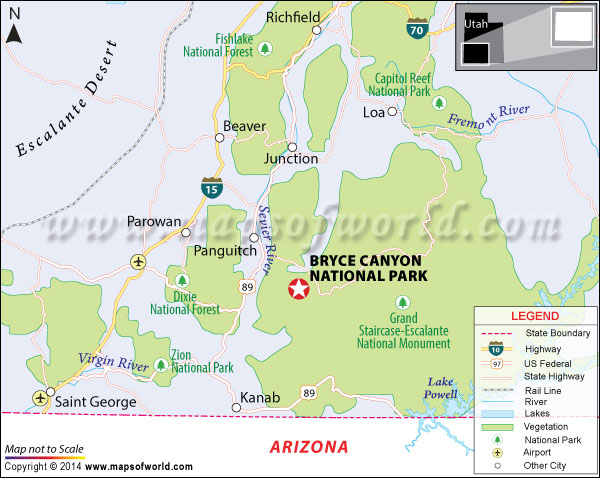 Where is Bryce Canyon National Park ?

The Bryce Canyon National Park is located to the south west of Utah. The nearest major airports are in Las Vegas (LAS) and in Salt Lake City (SLC) – each about 270 miles from the park. Other smaller airports near the park are in Cedar City (CDC) at a distance of about 80 miles and at St. George (SGU) about 125 miles from the park. Public transportation does not reach the national park. Visitors may be required to drive down. The free Bryce Canyon Shuttle takes visitors to the interesting points in the park.

The Bryce Canyon National Park is open round the year. Winters, however, are best avoided as some roads are shut down following a heavy storm and are reopened only after they are plowed and sanded. Late May through early October is the best time for a visit.