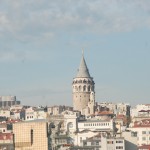 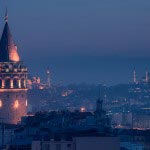 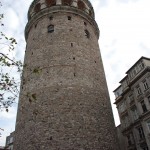 Established as a part of the expansionist program of the Genoese colony in Constantinople, the nine-storey Galata Tower is, presently, one of the most visited destinations in Istanbul. The majestic tower offers sweeping views of the Bosphorus, and the Sea of Marmara. The Genoese call it Christea Turris (the Tower of Christ in Latin), while it is referred to as the Megalos Pyrgos (The Great Tower) by the Byzantines.

The history of the tower is interesting. In 1509, the tower was severely damaged in an earthquake. The architect Hayrettin restored the tower. The tower served the purpose of a jail for the captives condemned to work at the Kasımpaşa Naval Dockyard, during the rule of the Süleiman the Magnificent. At the close of the 16th century, the chief astrologer, Takıyeddin Efendi, set up an observatory on top of the Galata Tower, which was later closed and the tower resumed its role as a dungeon, under Sultan Murat III.

Ironically, the tower which was used as a fire observatory post 1717, caught fire in 1794 and was badly destroyed. It was restored and a small room made of wood was added to the tower. Another fire broke in 1831, and Sultan Mahmut extended the tower with the construction of two more floors. He also got the top of the tower covered with a special cloth wrapped in conic style.

Presently, the tower serves as a landmark and a tourist destination. The lift operates till the seventh floor, and the visitors are required to climb the remaining two floors. The top floor of the tower has a restaurant that offers stunning views. During your visit, enjoy Fishing at the Galata Bridge and relish yourself with delicious Street Food of Istanbul.

Where is Galata Tower?

The Galata Tower is a Gothic stone tower situated in the Galata district of Istanbul, Turkey. It is located just to the north of the Golden Horn, near the Sishane metro station. The tower is 21.6 km away from the Ataturk Airport, via the Kennedy Cd route.

Tickets: The tickets for entry to the balcony of the tower cost 11 Turkish Lira (about $7 USD).

The best time to visit Istanbul is from April to May and from September to October (the spring and autumn season). The idyllic weather is perfect for traveling. You may plan your tour to the Galata Tower accordingly.