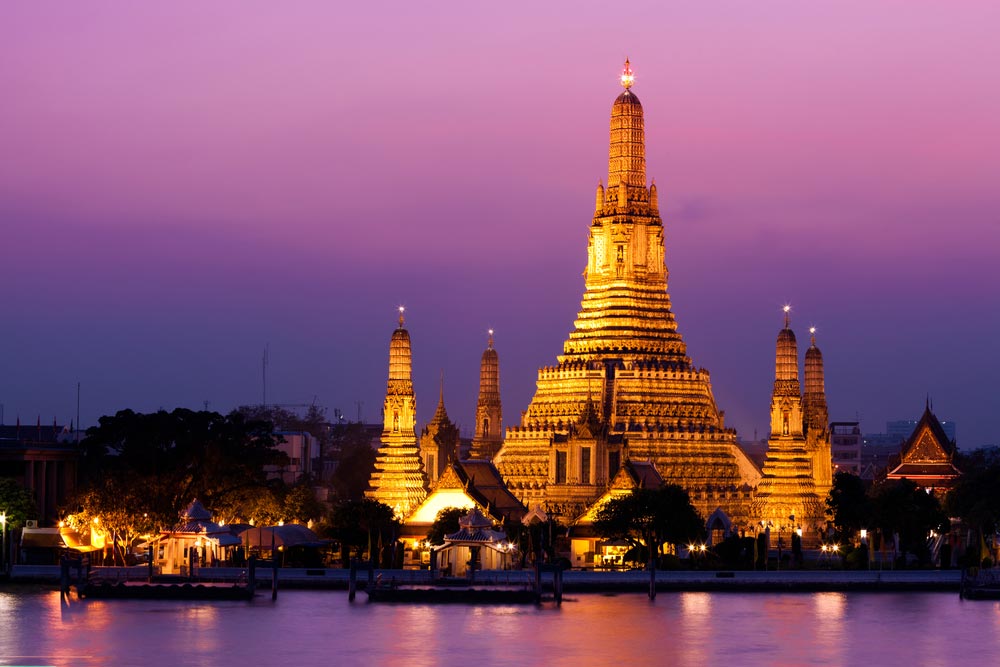 Wat Arun, Thailand also known as the Temple of Dawn.

Wat Arun in Bangkok is also known as the Temple of the Dawn. Wat Arun was completed during the time of King Rama III. The temple is known for its towers or Prangs, which have been constructed in Khmer style.

The surrounding atmosphere of the Wat Arun is very peaceful and serene. The replica of Lord Buddha is a splendid view from a distance. It is believed that the main Buddha image has been designed by Rama II himself.

Wat Arun has been designed as an architectural representation of Mount Meru. It also represents the concentration of mind sought by the mavens. Four small prangs of 79-meter height are beautified with ceramic tiles and shards of multi-colored porcelain. The outer prangs exhibit statues of Phra Phai, the God of the Wind. The collection of statues is also replete with mosaic decorations. Impressive mythical giants guard the entry to the temple building.

The murals depict Prince Siddhartha’s encounter with instances of death, birth, disease, old age and sickness. The ashes of Rama II are buried in the base of the Buddha image.

Where is Wat Arun?

Located on the street off Th Arun Amarin in Bangkok Yai district of Bangkok, Wat Arun is at a distance of around 40 kms from the Swarnabhumi Airport. You can take a taxi or choose to travel in a bus to reach Wat Arun.

During sunrise and sunset Wat Arun looks magnificent. The temperature may rise during afternoons, thus early mornings or evenings are the best times to visit Wat Arun.