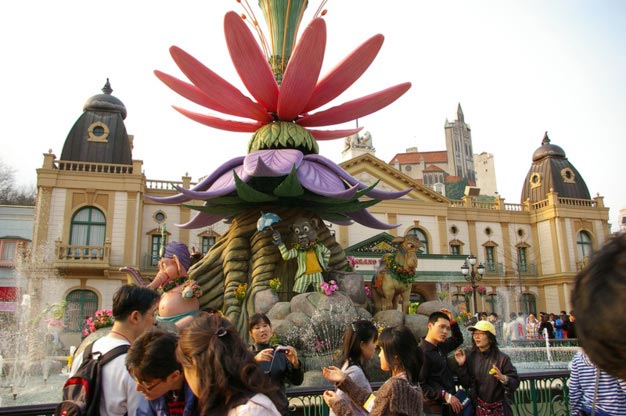 South Korea is not only one of the most beautiful countries, but it has also evolved as one of the richest countries in Asia and even in the world. Presently, it occupies the tenth position in the world terms of GDP.

South Korea is situated in Northeast Asia and it shares borders with North Korea. The capital of South Korea is Seoul and it is a huge dynamic city which blends the traditions of its ancestral past with the trends of a magnificent metropolis city.

The best time to visit South Korea is during the season of autumn, when the climate is superb with bright sunshine and clear blue skies. The international airport of South Korea is in Incheon and most of the travelers opt for direct flights.

South Korea has 8 international airports – the largest being Incheon International, located approximately 45 minutes west of Seoul. Among the others, only Gimhae (Busan) and Jeju field significant numbers of international flights. Korean Air and Asiana are the principal carriers to and from South Korea. United Airlines and Northwest Airlines serve Seoul Incheon (ICN) mainly through their connecting hub in Tokyo Narita (NRT). United Airlines flies non-stop to Seoul from San Francisco and Delta operates a non-stop flight from Atlanta.

You can also reach South Korea by train. A special treatment is given to travelers coming from or continuing on to Japan. For them, the tickets are available at discounts of 30% on KTX services and 9-30% on Busan-Fukuoka ferries.

There are many ferry connections from Busan to Japan. JR’s Beetle hydrofoil service from Busan to Fukuoka finishes the trip in just three hours with up to five connections a day. However, all the other links are overnight slow ferries such as Pukwan Ferry Company’s services to Shimonoseki which is a one-way tour. A Busan-Osaka ferry is operated by Panstar Line Co., Ltd. Besides, there are ferry links between Incheon and Weihai, Qingdao, and Tianjin in China. Reaching South Korea by land is practically impossible due to its location at the end of the Korean peninsula and the political situation with North Korea. The border between North and South Korea is considered the most heavily fortified border in the world. However, these days it is possible to do limited trips into North Korea from the South, but not vice versa.
Transport

South Korea is a small country and therefore flying in the country is more of a luxury than a necessity. Notable exception of connections by air is to the island of Jeju.

The National train operator Korail connects major cities in South Korea. Recently, trains in South Korea are quite competitive with buses on speed and price. Along with it comes safety. Trains are quite safe in here and comfortable too. However, services in the rural areas are not so good. A famous train service in South Korea is the high-speed Korea Train eXpress (KTX) that provides services between Seoul and Busan via Daegu and Daejeon. It uses French TGV technology to zip along at up to 300 km/h. The full trip currently takes around 160 minutes. These KTX trains have 18 cars with the first 3 being first class and the rest with reserved economy seating. There are drink vending machines on board and attendants who pass by with snack carts that includes beer, soda, cookies, candy, sausages, hard boiled eggs, and kimbap (rice rolls). Non-KTX trains are poetically ranked as Saemaeul though Saemaeul trains are extremely comfortable, having seats that are comparable to business class seats on airplanes. The extensive commuter train network also operates with the massive subway system.

Buses are frequent, punctual, and go very fast in South Korea. There are two kinds of buses running in the country. These are express buses and intercity buses. Express buses are faster, but intercity buses visit more places. Boats are also used sometimes by the tourists.

South Korea has a peppy nightlife.. However, most restaurants and bars are required to close their doors at midnight. There are many hotels in South Korea, which are designated as “tourist” clubs. These can stay open later. Itaewon is a place in the country, maintained as a Special Tourist Area. It allows many establishments to remain open 24 hours.

Coffee shops and tea rooms (tabangs), another popular place to spend time, differ from their Western counterparts. Cups of coffee generally cost W3,000 and up with no refills. However, customers can stay and chat as long as they like. Many coffee shops have waitresses who will come to your home or office with a thermos full of coffee, then sit and talk with you while you drink. Nightclubs and “rock cafes” rock the show in South Korea. South Korean clubs expect the tourists to buy a minimum amount of drinks and food when one sits at a table. South Korea had 2 types of beer: Crown and OB (Oriental Brewery). Recently, each company has spawned a number of specialty beers and imported beers are becoming more popular giving beer drinkers a wider selection from which to choose. Soju (a potato-based liquor) and makgeolli and dongdongju (rice-based liquors) are popular among Koreans. Korea Folk Liquor Museum in Gyeonggi Province is the best place for traditional South Korean drinks.

Pojangmacha is an outdoor food stall usually on wheels. The owner can move it easily to different locations. They usually open up shortly before dusk near river fronts, college districts, and shopping areas. No matter what the weather or temperature, these little stalls always do a brisk business. Hostess Bars also called Room Salons cater to groups of men who want to have female companionship while they drink. The women are very attentive to their clients and a small group can spend over a million won in one setting. Karaoke is another form of entertainment in South Korea. No matter where a tourist goes, one can always find at least one noraebang (singing room). Most of them offer the same selection of songs for tourists. If you go with a bunch of Koreans, you will be forced to sing. A dallanjujeom combines a noraebang with a hostess bar setting. Patrons take turns singing like in singing rooms. This is the most enjoyable part.

Movies can also be enjoyed in South Korea. Western films are most popular, especially from Hollywood. Korean movies are shown mainly in their native language. Imported movies are shown with Korean subtitles and blockbusters are usually released in Korea, shortly after their home country openings. Besides, you can also do good shopping in the country, whether books, clothes, or accessories.