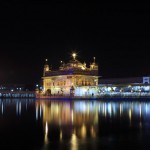 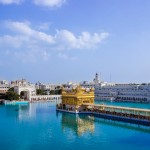 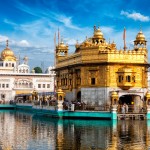 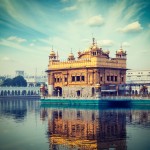 The Golden Temple, also called Sri Harmandir Sahib (meaning Temple of God), is a Sikh Gurdwara (place of worship), built by the fifth guru of the Sikhs, Guru Arjan Dev. The temple was constructed from 1588 to 1604, when it was completed with the installation of the sacred religious text, the Guru Granth Sahib.

After Afghan attacks in the mid-eighteenth century destroyed parts of the temple, it was rebuilt in 1764. In the early nineteenth century, the building was decorated and covered in gold by Maharaja Ranjit Singh, earning the temple its nickname the Golden Temple.

The Golden Temple is surrounded by a lake called the Sarovar, which contains Amrit, holy water, (also referred to as immortal nectar). The sarovar also has a miraculous site called Dukh Bhanjani Beri. The legend associated with this Beri is that Duni Chand Khatri, a rich landlord of Patti town had five daughters. One day he asked them who provided them meals. To which four of the elder daughters replied that their father is their benefactor and provides them meals. But, the youngest one named Rajni said that God sustains all living beings. Hearing this Duni Chand got enraged and he got her married to a leper. She loved her husband and took care of him. Around that time Guru Ram Das Ji was building a new city at Amritsar. Rajni took her husband to Amritsar. She met the devotees of the Guru who pitied her situation and gave her a room to live. She was assigned the duty of cooking meals in the common kitchen. She used to bring her husband along while she went to join her duty. She used to make him sit under a shady tree and go to the kitchen. One day she left him under a Ber tree. Her husband, the leper saw crows plunging in the pool and transforming from black to white. He understood that this wasn’t ordinary water. He reached near the pond and dipped into the water. He became healthy and was no longer a leper. He again sat under the tree. Rajni wasn’t able to recognize him. The young man convinced her and the couple went to tell Guru Ram Das ji about the pool. Hearing this Guru Ram Das ji told Baba Buddha ji, the head priest of the temple, that this pond was the place that Guru Amar Das ji had anticipated. As the tree relieves afflictions and pains, it is known as Dukh Bhanjani Beri.

There are four entrances to the temple, symbolizing the openness of the temple, which welcomes people from all directions and ways of life. The Golden Temple is a holy place for Sikhs and a place of worship.

The Golden Temple is located in the city of Amritsar in Punjab, India. Amritsar is located in northwestern India, and is the spiritual and cultural center for the Sikh religion. Amritsar is well connected by the rest of India via a fine network of transportation. Sri Guru Ram Dass Jee International Airport is located just 11 kilometers northwest of the city of Amritsar. You can also reach the holy city Amritsar by train or by bus. At the airport, railway station and bus stand, you will get taxis, autos and rickshaws to take you to the Golden Temple.

In terms of climate, winter, spring and autumn are a good time to visit the Golden Temple. The season lasts from October to March. Other good times to visit the temple are during holidays and festivals. The second week of April is the Vaisakhi festival, and other holidays include the martyrdom day of Guru Teg Bahadur ji, and the birthday of Guru Nanak Dev ji. During Diwali, the festival of light, the temple is illuminated with lamps, lights, and fireworks. The popularity of the temple makes it crowded throughout the year.

Nearby attractions of Golden Temple