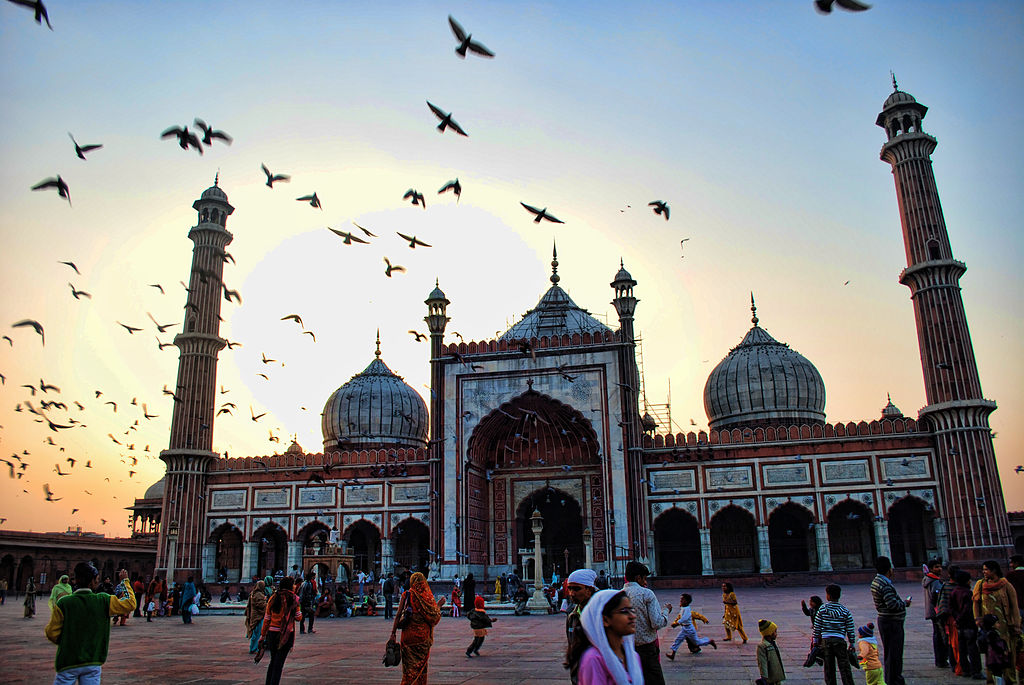 The Jama Masjid in Delhi is the largest mosque in India- the country with the largest number of mosques. It is an architectural masterpiece constructed during the reign of Shah Jahan, the Mughal emperor famous for his patronage of arts and architecture. Other monuments constructed under Shah Jahan’s reign are the Taj Mahal at Agra, the Red Fort, Moti Masjid in the Agra Fort, the Tomb of Jahangir, the eponymous Shah Jahan Mosque in Thatta.

The monuments built during Shah Jahan’s reign can easily be told apart from the rest of Mughal architecture by their elegance and intricate design. The Jama Masjid too carries the distinct stamp of Shah Jahan.

The Jama Masjid marries the concept of religion and society, with a simplicity and logic that holds, three centuries later. Even today, the mosque is not an ancient object of study of students of architecture but it is a thriving center of human activity.

People visiting the mosque in the evening, sit around in the courtyard soaking in the golden red rays of the setting sun. Hundreds of pigeon can be seen settled in the crevices of the mosque and on its steps and domes. A running child or an over enthusiastic visitor to the mosque often scares away flocks of feeding penguins which take flight together. They form a beautiful sight. In the evening people pour in from the nearby market when the muezzin calls for prayer. At such a moment, it is impossible to distinguish the mosque as a monument whose architectural features deserve separate study. The monument, the worshipers and the prayer that rents the air- all become one contiguous life.

Jama Masjid can accommodate 25000 worshipers at the same time.

Daytime is more suited for a study of the rich architectural design of the mosque.

The construction of the mosque was started in 1650 AD and was complete by 1656 AD.

The eastern gate is more elaborately planned with honeycomb carvings on its soffit. A large number of cupolas also decorate the eastern gate. A Bengali balcony projects from the rear side of the gate.

The mosque itself faces west. The southern and northern gates are less elaborately styled, and are smaller. The verandahs running out from both sides of these gates have seventeen columns each.

The central building of the mosque is built on a great sandstone courtyard. There are colonnaded verandahs surrounding the courtyard from all sides. The ablution pond is in the center of the courtyard. It is made of marble, and a fountain springs from its center. Right in front of the tank, there is a sandstone platform for the Muazzin- an Islamic cleric who calls out to followers of the faith to come attend their evening prayers. A grey sandstone pulpit can be seen at the central entrance to the mosque, and two sun dials indicate the time. There are cloisters on all three sides and the mosque on one side.

Entry to the main mosque is through an archway. There are minarets on both sides of the archway surmounted by cupolas. Five arches open from the mosque hall.

In its space plan and architectural design, the Jama Masjid bears a strong resemblance to the Moti Masjid of Agra. The word ‘Yahadi’ is inscribed on the spandrel of the central archway.

The floor of the main mosque is made of thin black marble, with designs of mozalla- the praying carpet used by Muslims.

There are three domes atop the roof of the Jama Masjid. These have an inner and outer shell with sufficient space between the shells. This not only gives the mosque a grand appearance but also helps cooling. The domes are fluted at the top and mounted with copper gilt spikes.

The Jama Masjid was built by emperor Shah Jahan as a response to the need of a mosque in his fortified city of Shahjahanabad. It took five thousand workers a span of six years to complete the construction of the mosque, which was started in 1650. The workers were paid a wage of 1 paise per day then! The cost for this project came to 1 million rupees, even without considering the price of stone and marble. 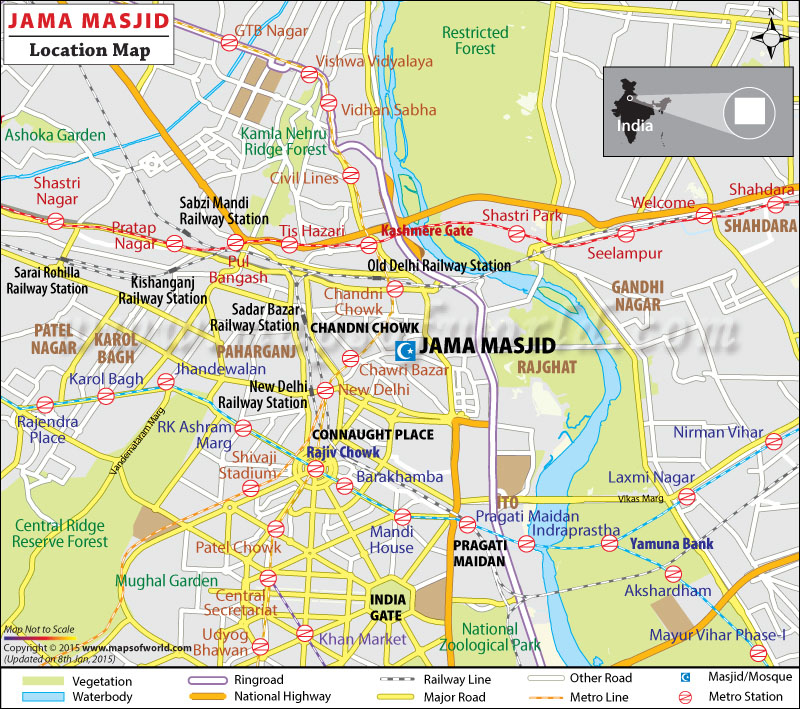 Where is Jama Masjid?

The Jama Masjid is very close to the famous red Fort, about 500 meter to its west. It stands on the highest point of the hill Bho Jhala.

The nearest international airport is Indira Gandhi National Airport. From there, a cab will take you to Jama Masjid via Vandemataram Marg in less than an hour.

From the New Delhi railway Station, a cab will take you to Jama Masjid via DB Gupta Road in 18 minutes.

Try visiting just before or just after the extreme winter months of November to January. You will find the weather very pleasant if you want to enjoy your time in the mosque’s courtyard. Evenings are best if you wish to just soak in the atmosphere. However, if you are keen to explore the architecture of the place, try visiting during daylight hours.

Admission to the mosque is free.

However other charges apply as follows:

The mosque is open from dawn to dusk, but remains closed during prayer times. In keeping with religious sentiments, visitors are advised to dress conservatively.

What are the coordinates of Jama Masjid?

What are the places of interest near Jama Masjid?