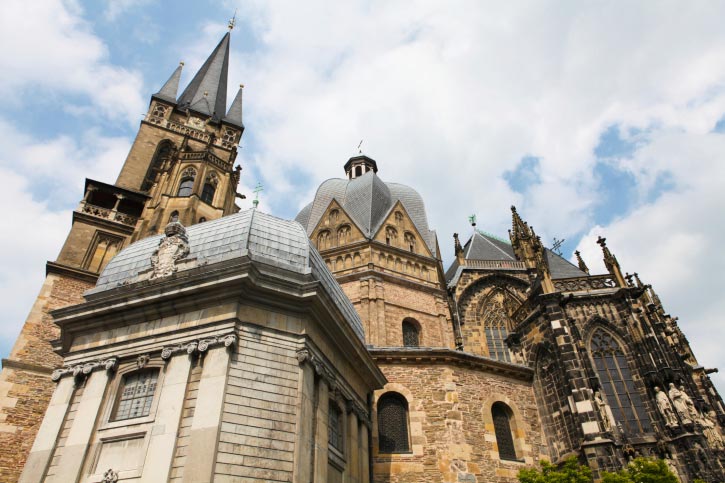 Aachen Cathedral is a Roman catholic church, known as the “Imperial Cathedral” or the “Royal Church” of St. Mary at Aachen. The cathedral was one of the first 12 places to be designated a UNESCO World Heritage Site.

The cathedral was renovated and expanded at a few points during the Middle Ages to accommodate the growing number of pilgrims. The cathedral was constructed by Charles the Great, also known as Charlemagne. It was later consecrated by Pope Leo III. The remains of Charlemagne rest inside a vault within the cathedral.

The cathedral is noted for its ornate mosaic ceilings and décor, stained glass windows, and architecturally complex exterior with various architectural styles from different periods. The palatine chapel has an octagonal basilica, a cupola, and vaulted ceilings, inspired by the style of the eastern Holy Roman Empire.

Inside the cathedral is the golden shrine of the Virgin Mary,which dates from 1220-1239, and contains the relics of Mary’s cloak, baby Jesus’ swaddling clothes, St. John the Baptists’ beheading cloth, and Christ’s loincloth.

Located next to the cathedral is the treasury that houses some of the unique exhibits such as the Cross of Lothair, the Persephone sarcophagus and the bust of Charlemagne (donated by Charles IV). Every seven years, these relics are displayed during the Great Aachen Pilgrimage.

The massive door to the Aachen Cathedral is called Wolf’s Door. Legend has it that the people of Aachen tricked the devil by giving the soul of a wolf instead of a human as repayment for the funds to build the cathedral. The angered devil then slammed the door so hard that his thumb got caught in it and ripped off; it can be seen stuck in one of the lion’s heads at the door of the cathedral.

Where is Aachen Cathedral ?

The cathedral is located in Aachen, in the German state of North Rhine-Westphalia in Europe, not far from the borders that Belgium and the Netherlands share with Germany. Because of its location along the border, the cathedral can be easily accessed from either Germany, Belgium, or the Netherlands.

A popular time to visit the Aachen Cathedral is during the Aachen Pilgrimage, which occurs every seven years. The next of these pilgrimages will be in June of 2014, when the relics will be on display.

You need to pay €4.00 for an individual adult ticket while the reduced ticket is available at €3.00. For school students, the ticket to the cathedral costs €2.50.