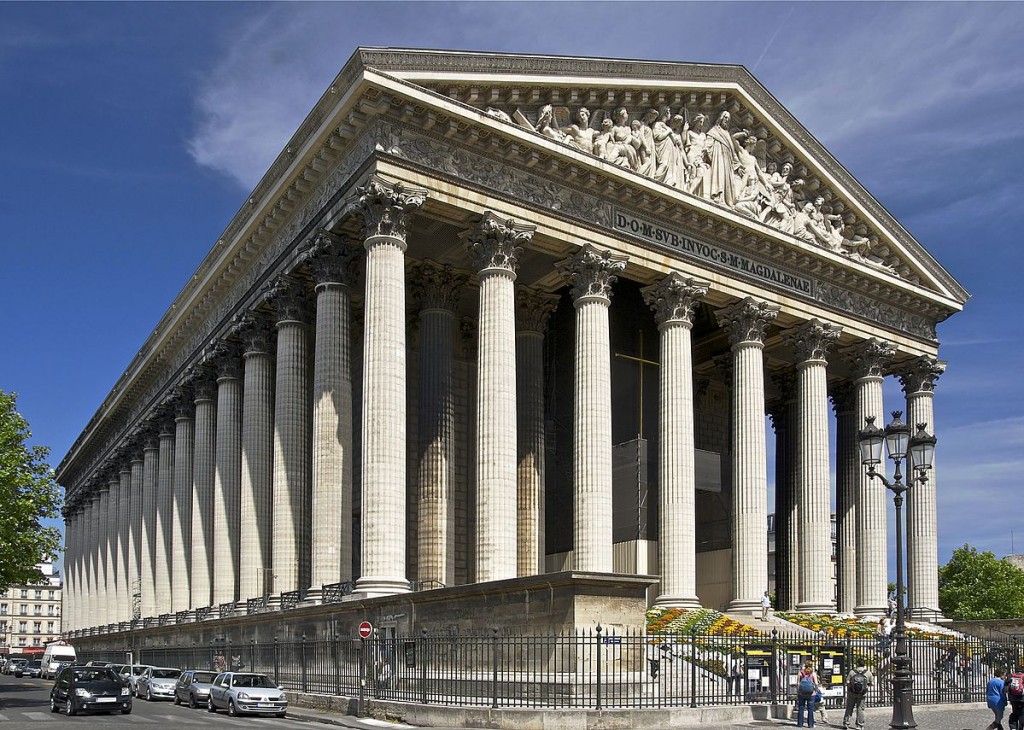 La Madeline is a famous roman catholic church in Paris

La Madeleine is a church dedicated to St. Mary Magdalene, who is called Madeleine in French. Located in the famous 8th Arrondissement of Paris, this church is in the vicinity of other notable tourist attractions.

The history of La Madeleine is interesting, to say the least. The church was initially designed by Pierre Contant d’Ivry and commissioned in 1757, but the construction was halted in 1764. The initial design of the building was based on Les Invalides in Paris, which has a Baroque style of architecture. However, Contant d’Ivry passed away in 1777 and the task was given to his pupil, Guillaume-Martin Couture. Couture believed that the initial design was not good enough and decided to raze the incomplete construction to the ground and start afresh. The new design was based on the Roman Pantheon. By the start of the French Revolution in 1789, only a small section of the building was complete. Work was then discontinued as the new government decided to do something else with the new building.

In 1806, Napoleon wanted to erect a memorial for his army and commissioned Pierre-Alexandre Vignon. The design would now be based on the Maison Carrée in Nîmes. The existing foundations were pulled down, but the columns erected were retained. The construction work resumed again. However, due to the completion of the Arc de Triomphe du Carrousel, the initial role of the building was reduced.

After the fall of Napoleon and the restoration of King Louis XVIII, it was determined that the building would be used as a church dedicated to Mary Magdalene. Sadly, Vignon died in 1828 before the building could be completed and Philippe Joseph Henri Lemaire was asked to take over. In 1837, an idea was floated to make the building a railway station, but thankfully, it never happened. Finally, the building was consecrated as a church in 1842.

La Madeleine is built in the Neo-classical style and has 52 Corinthian columns, which go all around the buildings. Each column is 20-m tall. The church doors are made of bronze and have reliefs that represent the Ten Commandments. The grand interior of the church is graced by a single nave with three domes that have wide-arched bays. The high altar is at the rear of the church. The statue of St. Mary Magdalene, being lifted by angels, is mounted above the altar. In the half dome above the statue, there is a fresco by Jules-Claude Ziegler that depicts important figures in Christianity with Napoleon in the middle. There is also a very beautiful pipe organ inside the church.

There is no dearth of budget and luxury accommodations in Paris. While Home Moderne and Hotel Darcet are nice options for budget travelers, the Le Bristol Hotel and the Shangri-La Hotel are perfect for travelers with deep pockets.

Where is La Madeleine ?

La Madeleine is located in the 8th Arrondissement of Paris, France. Explore its location Map.

The two major airports of Paris, the Charles de Gaulle Airport and the Orly International Airport, are located approximately 27 km and 20 km from the church.

There is no central railway station in Paris and the six stations that serve the city are not connected to each other. However, this also means that rail travel in Paris is not a problem.

The nearest train station of the Paris Métro is Madeleine on line 8, 12 and 14 and it is a short walk from the church.

Due to its location near the center of Paris, La Madeleine is well connected with rest of the city by road.

The best time to Visit La Madeleine is during the major Christian holidays of Easter and Christmas held in April and December respectively.

Since La Madeleine is located in the 8th Arrondissement, it is quite close to many popular tourist attractions in Paris such as the Arc de Triomphe, Place de la Concorde and many more.