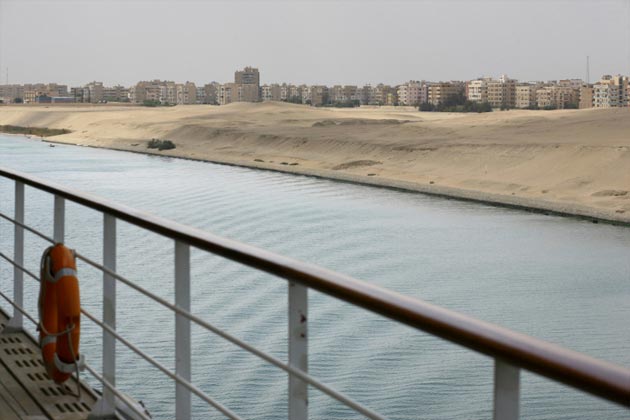 The Suez Canal in Egypt

The Suez Canal, sometimes called the Highway to India, is the link between Europe, Africa, and Asia, connecting the Mediterranean Sea and the Red Sea. A man-made waterway, this Canal is a work of impressive engineering that has facilitated international commerce since its opening in 1869. A sum of $100 million was spent in the construction of the canal. This single-lane canal features two passing areas: the Ballah by-pass and the Great Bitter Lake.

The idea of connecting the Nile River in Egypt and the Mediterranean Sea with the Red Sea was conceived a long time back. The Ancient Egyptians were the first to undertake such a project. However, their canal connected the two seas via the tributaries of the River Nile. This canal was abandoned and reopened many times in its history by different rulers before it was finally abandoned due to accumulation of silt and the receding waters of the Nile.

The first effort to build a modern canal that would directly link the two seas was made by Napoleon Bonaparte. He hoped that by constructing a canal, he would be able to land a devastating blow to the English monopoly over trade and commerce. However, his engineers miscalculated and thought that there was a difference of nearly 30 feet between the two seas. The project was abandoned as it meant that any functional canal would then require locks, which would make the project too expensive. It was later determined that there was no practical difference in height between the two seas and building a canal was feasible.

In 1854, Ferdinand de Lesseps managed to convince the Egyptian viceroy, Sa’id Pasha and in 1858, he created the Suez Canal Company. It had the authority to create the canal and operate it for 99 years after which the ownership would be transferred to Egypt.

Work on the canal started in April 1859 and was completed in November 1869. Over the years, ownership and control of the company was transferred between multiple governments. The international community was concerned over possible misuse of the canal for commercial and political purpose. In 1888, the Convention of Constantinople declared that the waterway would be completely neutral and would offer passage to vessels from any nation regardless of their purpose.

After the Egyptian revolution of 1952, the canal was declared to be completely run by Egypt. In 1956, Israel, France, and Britain launched an invasion into Egypt in order to regain western control over the canal and overthrow the Egyptian president, Gamal Abdel Nasser. This was known as the Suez Crisis or the Tripartite Aggression. After pressure from the United States, the Soviet Union, and the United Nations, the three invading nations withdrew. The canal is currently owned and maintained by the Suez Canal Authority, which is owned by Egypt.

Before the canal was constructed, cargo ships had to travel around the southern tip of Africa to make the journey from Europe to Asia, or goods had to be transported via land. The waterway is controlled by Egypt, but is under an international treaty so that its usage is shared. The canal accommodates more traffic and larger ships than the Panama Canal. It also dramatically reduces the transit time by being the shortest route between Europe and Asia.

The canal is called Qanat as-Suways in Arabic. Being one of the world’s most heavily used shipping lanes, the canal has become one of the most essential waterways in the world. The seawater flows freely from this lock-free passage.

To make the canal safe, the banks of the canal are supported with barriers to protect it against the wash and waves due to frequent ship transit. The ships move slowly in the canal to prevent soil erosion. The perfect way to see the canal is by boat or cruise.

Where is the Suez Canal

The canal is located in Egypt, stretching from Port Said to Port Tawfiq in Suez. As the canal is close to 200 kilometers long, it is not often traveled by tourists and can be seen at various points along the way. Alternatively, cruises do travel down the canal for a more complete experience. Otherwise, a good place to have a sweeping view of the canal is the Friendship Bridge (or Egyptian-Japanese Friendship Bridge) near Port Said.

Egypt will inaugurate the New Suez Canal on August 6, 2015. The ‘Suez Canal Axis’ is the name of the expanded canal with a new 37-km waterway. The latest expansion is likely to double the capacity of the canal from 49 to 97 ships.

The winter months from December to February is the ideal time to visit Suez Canal. This is when the weather remains comparatively cooler.

The Waterfront Quarter, Military Museum, De Lesseps’ House, Ismailia Museum, Suez Canal House, Lake Timsah, and Garden of the Stelae are some of the interesting places to visit around the canal.

Other nearby attaractions: Cairo, Great Pyramids of Giza, and Alexandria.