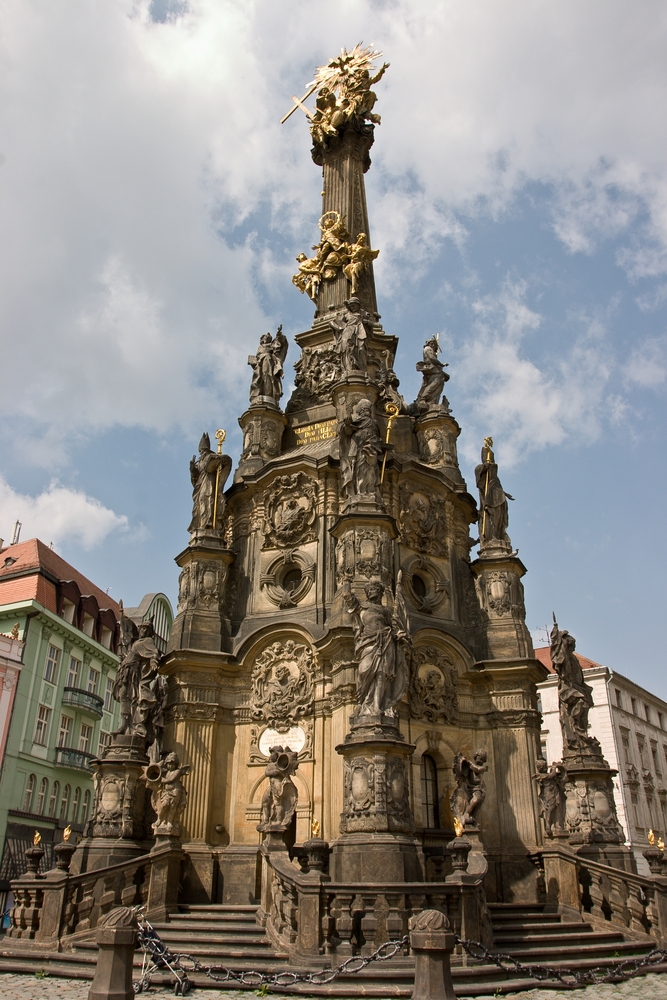 The Holy Trinity Column is a Baroque style monolith in the city of Olomouc in the Czech Republic. Constructed from 1717 to 1754, the column was intended to honor and praise God for ending the Plague, which had killed many people, and ended just two years before the tower’s construction began. The structure, also known as a plague column or Marian column, is dedicated to the Virgin Mary. The Holy Trinity Column is one of the most impressive examples of its kind because of its grand size, including a chapel housed within the base, and elaborate decorations, and the use of stone and gilded copper.

Olomouc was once the capital of Moravia, before it became Czechoslovakia and later the Czech Republic. The builders of the Holy Trinity Column mostly came from Olomouc, and much of the artwork that decorates the column has symbolic connections to the city. Many of the craftsmen who worked on the column suffered various misfortunes and died before the work could be completed. The sculptures were completed by a local artist, Ondrej Zahner. The style they created eventually became known as Olomouc Baroque.

The completed column was consecrated during a ceremony on September 9, 1754, which the Empress Maria Theresa and her husband Francis I attended. The Prussian military attacked Olomouc in 1758, causing some damage to the column. Though the column was soon repaired, a stone shot was added to the column to symbolize the history of the monument. The Holy Trinity Column stands as a testament to the religious traditions and history of the city of Olomouc.

The column sits atop a circular base with a hexagon stacked on top of it. The ground level contains a chapel, and has a pedestal at each point of the hexagon, each with a statue of a saint. The same concept is used on the middle tier and the top tier. Each of the major saints from the Baroque period are featured, along with the virtues. From the top tier extends a pillar, which stands 10 meters (33 feet) tall. The pillar is decorated with various sculptures of the Virgin Mary and angels, Jesus on the cross, a globe, and the Archangel Michael, and a dove representing the Holy Spirit.

Where is Holy Trinity Column?

The Holy Trinity Column is situated in the Upper Square in Olomouc, Czech Republic. Olomouc is positioned along the Morava River in the eastern part of the country.

Olomouc is easily accessed via train for other major cities nearby. Within Olomouc, it is easy to reach the Holy Trinity Column on foot, as it is located in the central square.

Spring and fall are the best times to visit Olomouc because of the natural beauty of the city during those seasons. The city’s festival season runs through May and June, and September and October.