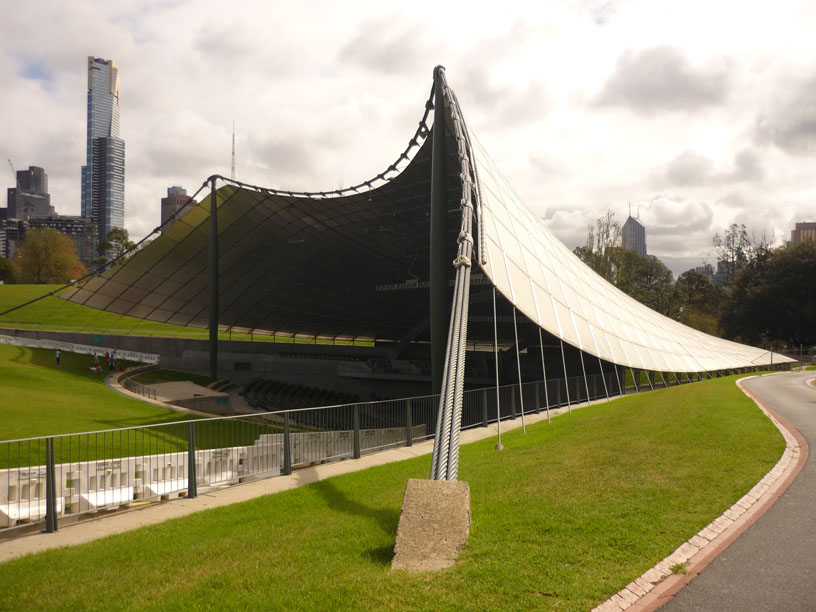 A hugely popular Melbourne venue for outdoor events, the Sidney Myer Music Bowl sprawls across a section of the Kings Domain Garden. The Sidney Myer Music Bowl is home to Carols by Candlelight and the free, open- air concerts of Melbourne Open Air Orchestra. The famous annual music festival is held here every January. The venue has seen regular performances by international artists. American musicians Jack Johnson, Lenny Kravitz, Kanye West and Canadian singer k. d. Lang- all have performed at the Bowl.

The idea for a music Bowl in Melbourne occurred to violinist and philanthropist Sidney Myer after he attended a show at the Hollywood Bowl in Los Angeles. On Myer’s death the Sidney Myer Charitable Trust (now the Myer Foundation) was established. The trust funded the construction of the Sidney Myer Music Bowl. A total of $500,000 dollars was spent.

The Sidney Myer Music Bowl opened its gates to the public on 12 February 1959. The inauguration was attended by thirty thousand people- a sign that the venue’s popularity would only grow manifold in the years to come. In fact, the 1967 homecoming concert of the celebrated pop band Seekers, at the Sidney Myer Music Bowl, saw an attendance of two hundred thousand people- the largest attendance at any concert in any part of Australia, ever!

Chief architect Barry Patten was at least ten years ahead of his time when he designed this open air structure. The Bowl is a membrane covered tensile structure. Aluminum faced plywood panels have been securely attached to several prestressed cables which are in turn covered to an inextensible curved cable, the endpoints of which are attached to two masts.

At the time of building, it was one of the very few structures in Australia to have employed this architectural technique, and also the grandest.

Guided tours are available at Arts Centre Melbourne. These tours cover all the six performing venues, including Sidney Myer Music Bowl. Guided Tours, specially packaged School Tours, and Theatres and Exhibition Tour are the three tours available. These tours take the visitor behind-the-scenes, and some tours may even include a theater workshop.

Visitors to the Sidney Myer Music Bowl need to use the general parking for the Arts Centre Melbourne. The car park is located just outside Melbourne’s CBD, and has two levels.

Accessible Parking: Disables parking bays are available at both the levels.

*Available monday to friday only.

Electronic Car Parking and Charging: Two bays near the Valet Parking area on the upper level are available for electronic car parking.

Valet Parking: Valet Parking is available on Mondays through Saturdays from 5:30 p.m. Charges are $50. Discounts are available for disabled people and Melbourne Arts Centre members.

Reserved parking is available on Sundays and public holidays from $30.

Weekends and public holidays have a flat rate of $19. The timings, between which to avail of the flat rate, are as follows:

If you are visiting Sidney Myer Music Bowl, or any other venue at Arts Centre, car park authorities encourage calling in advance to clarify rates and timings.

Reach by Air: The nearest international airport is Melbourne Airport. It is 17 miles away from Arts Centre Melbourne, via Flemington Road and M2 Highway. A cab will take 21 minutes to travel the distance.

Reach by Train: The nearest railway station is the Melbourne Central Railway Station. It is serviced by the Metropolitan Train. From there it is little more than 2 miles via the Batman Avenue and Exhibition Street. A cab will take around 10 minutes to cover the distance.

Reach by Tram: The nearest tram station is at St Kilda Road. From there, it is a short walk.

Melbourne is at its best between March and May and between September and November. This is because all the summer tourists have left by March, and are yet to arrive till November. Temperatures run in the range of 63º F and 75º F in these months. However, if you plan on attending the ticketed event, Carols by Candlelight, or the free Melbourne Open Air Orchestra, then you need to brave the summer heat as well as crowds of tourists as both these concerts take place in the peak summer season of December to February when temperatures can go higher than 80º F.

To book tickets for any event at the Bowl visit www.ticketmaster.com.au or call 136 100.