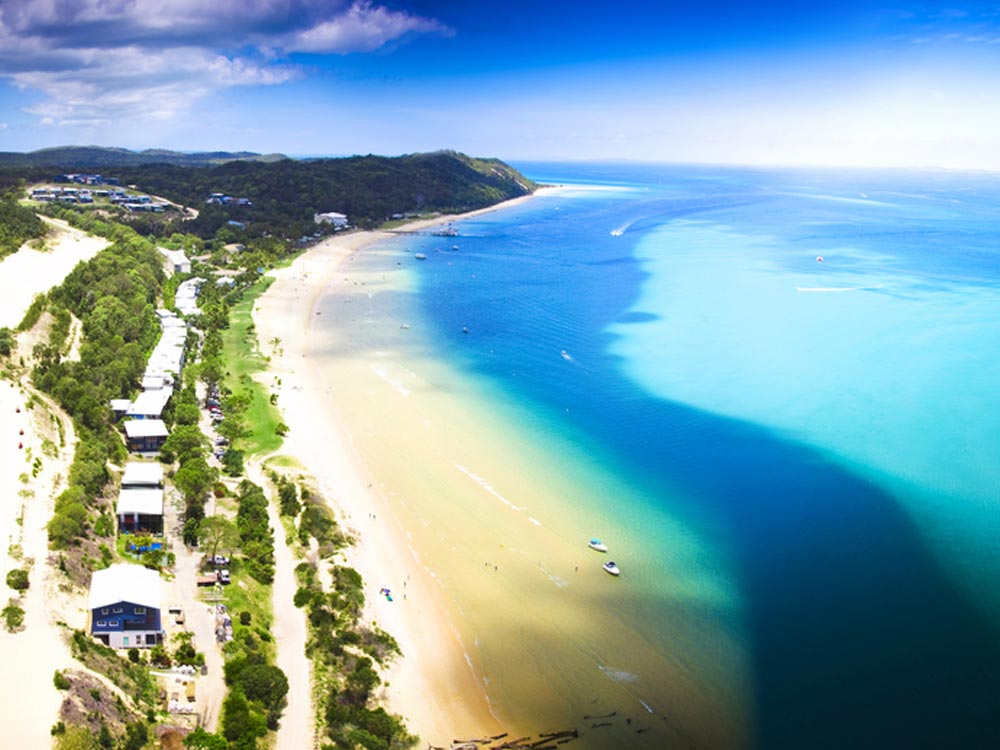 Picturesque view along the coastline of a row of cottages at Moreton Island, Australia

Moreton Island is covered almost entirely by sand and has the world’s largest sand hill called the Mount Tempest. Home to Tangalooma Wild Dolphin Resort and three other settlements, Moreton Island is easily accessible from Brisbane in Australia. This sand island is a national park – home to a variety of plants and animals and is very famous for its natural beauty. An ideal destination for adventure activities and beach fun, this island is visited by tourists on a regular basis.

The first lighthouse of this island was built in 1857 at Cape Moreton, following which four other lighthouses were established on this island at four different points – Cowan Cowan Point, North Point, Yellow Patch and Comboyuro Point. During the World Wars, several defense bases were set up on the island, to protect Brisbane port from any approaches.

Moreton Island with its magnificent natural surroundings is one of the major tourist destinations in Queensland, Australia. Tourists visiting this island can enjoy a variety of activities. One of the major attractions is the Tangalooma Wild Dolphin Resort, where one can see dolphins of various sizes. In the Resort visitors can hand feed a pod of dolphins.

A visit to the sandstone light house at Cape Moreton, built in 1857 is considered quite a norm. Here you are able to relive the history of Queensland. Also, from the lighthouse one can view the manta rays.

Moreton Island’s natural settings attract tourists from across the globe; it also has many activities to engage its visitors. The visitors can indulge in adventure sports such as sand tobogganing, boating, and surfing. Toboggan rides down the sand dunes and visiting at the 42-acre desert area are a standard addition to visitors’ schedules. The sandy beach, coastal dunes, freshwater lakes, and wide variety of plants and animal species also draw a lot of visitors. Relaxing activities like fishing, wildlife viewing, whale watching, snorkeling, or diving also appeal and engage the tourists.

Moreton Island is a natural paradise where clear azure waters meet the wide stretch of white sand. This sandy island, stretching 23 miles in length and 6 miles in width, is the ideal destination for those intending to escape from the busy and chaotic urban life.

Where is Moreton Island?

Located in the Moreton Bay Marine Park, to the north-east of Brisbane, in Australia, Moreton Island is a prime tourist attraction. About 44.7 miles from the Brisbane airport, this island is accessible by 4WD vehicles. Launch and coach transfers also ferry tourists. Brisbane Airport is the nearest airport, which receives many flights on a regular basis. From the airport, coach transfers are available directly to city hotels as well as to the wharf. Daily service of launch transfer to Tangalooma is also available. The traveling time on a launch from the airport is about 75 minutes.

Moreton island can be visited all year round, as the weather is always pleasant. Do note that Christmas, Easter, the Queens Birthday Long Weekend, and September School Holidays are the busiest times of year.