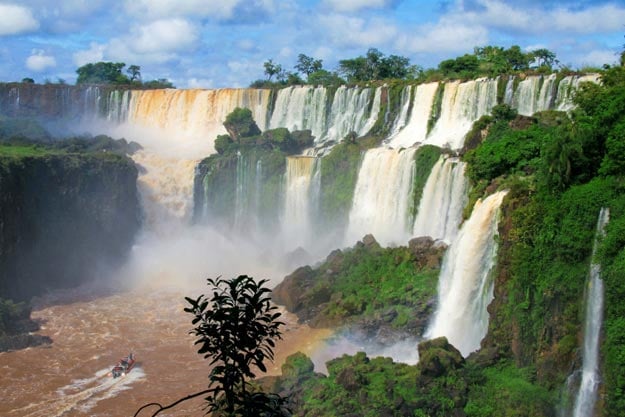 The impressive Iguazu Falls, which separates the Iguazu River into its upper and lower sections, is situated along the border between Argentina and Brazil. The number and height of the falls vary throughout the year depending on rainfall. The largest waterfall – the Devil’s Throat – is about 82 meters (269 feet) high. Around half of the river cascades down into the U-shaped Devil’s Throat. The count of these smaller waterfalls ranges from 150 to 300, depending on the water level in the river. Iguazu is a combination of two words “y” and “ûasú”, which means ‘water’ and ‘big’ respectively. Surrounded by subtropical forest, the falls appear like a reverse letter ‘J’. The falls are more prominent towards the Argentine side than the Brazilian side.

Millions of years ago, a volcanic eruption resulted in creation of the Iguazu Falls. Local legends have it that Naipi, a beautiful woman, was expected to marry one of the gods. Instead, she escaped from the wedding with her love, Taroba, in a canoe. The angry god, left at the altar, responded by cutting the river and creating the waterfall so the two lovers would fall to their doom. In 1541, the first European to view the falls was a Spanish explorer Álvar Núñez Cabeza de Vaca. A Brazilian army officer conceived the idea of establishing a national park at Iguazu Falls in 1897. In 1934, Iguazu National Park was set up in Argentina. Similarly, the Iguaçu National Park in Brazil was established in 1939. The former became a World Heritage Site in 1984. The same title was accorded to the Iguaçu National Park in Brazil in 1987.

Besides walking around the park and viewing falls from a distance, you can also go on a waterfall boat ride to enjoy and capture the views of the waterfall from all angles.

Iguazu National Park – Considered one of the most visually stunning wildlife destination, the park is home to over 2,000 species of vascular plants along with animals like howler monkeys, jaguars, and ocelots.

Macuco Safari – It is a perfect destination for those who love river rafting in high tides.

Where is Iguazu Falls?

The Iguazu River flows along the border between Brazil and Argentina, as do the Iguazu Falls. Devil’s Throat, the major waterfall at Iguazu Falls, cuts between the two countries. The falls can be accessed from Iguazu National Park in Argentina or Iguaçu National Park in Brazil. They are at a short distance from the Paraguay border.

How to Reach Iguassu Falls?

By Air – The nearby airports are the Argentine Cataratas del Iguazú International Airport (IGR) and the Brazilian Foz do Iguaçu International Airport (IGU). The Argentine airport is around 43 km from the site and it will take a 50-minute drive to reach the destination. The airport in Brazil is 15 km from Iguazu Falls. It’s a 22-minute drive from here. The park has a network of trains that make it easy for visitors to get around. You can choose to travel in a taxi or bus from the airport. If you book your accommodation in a hotel inside the park, then you can even visit the falls by foot.

While the Belmond Hotel das Cataratas is the best bet for the high-end traveler, the Boutique Hotel de la Fonte and San Martin Resort & Spa are good for the mid-range tourists. The budget travelers can find comfort at San Juan Eco Hotel and Hotel Pousada Rosa. All these accommodations are within a 5-km radius of the Iguazu Falls.

For a wide range of Argentine-Spanish dishes, come to María Preta. While Lemongrass is a charming street-side cafe in Puerto Iguazu, Bocamora is another nice dining option that comes with a romantic setting and a spectacular view.

Iguazu Falls looks most impressive during the rainy season from December to March. The weather can get hot and humid during this time, and the river sometimes overflows onto the walkways and the waterfalls are difficult to see. Peak season is during January and February, and again between June and July. The national parks will be busiest and most expensive during these months. May and September are great months to visit as weather remains pleasant and smaller crowds.

The park opens from 8:00 am to 6:00 pm between April and September and 7:30 am to 6:30 pm between October and March. The entrance fee to the Iguazu National Park is USD 40 per person. The amount is to be paid in Argentine pesos.