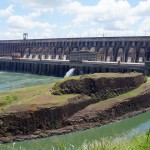 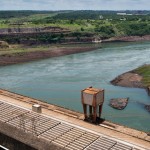 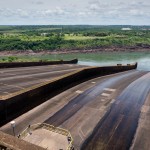 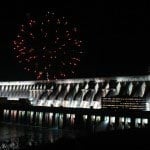 The Itaipu dam was built over the Paraná River as the power plant’s reservoir. This dam is also used to control the flow of the Paraná River. The construction of this dam was preceded by several intense negotiations between the governments of Brazil and Paraguay, which began in the 60s. The countries finally signed the Itaipu Treaty on April 26, 1973, to permit the construction of a hydroelectric power plant over the Paraná River. In the following year, 1974, the Itaipu Binacional Company was assigned the task of building and managing the dam. On November 5, 1982, the dam was activated by the presidents of Brazil, João Figueiredo, and Paraguay, Alfredo Stroessner.

Turning the pages of the history of the dam, it is seen that Guaíra residents got angry over the death of the Seven Falls and did several protests. In January 1982, about 32 visitors died due to the collapse of river walkway. Yet, the dam continued to operate and has become an important part of the countries’ economic development. Itaipu reimburses both the countries in the form of royalties. An amount of about US$ 6.6 billion has been paid as royalties to both the countries from 1985 to April 2009. The payment has been mentioned in Annex C of the Itaipu Treaty.

The magnitude of the construction of the Itaipu Dam is so vast that the volume of the concrete used in building the power plant would permit the construction of about 210 football stadiums like the Maracanã in Rio de Janeiro. The 196-meter-high Itaipu Dam was built using the volume of iron and steel that would be sufficient to build about 380 Eiffel Towers. During the rainy season, the river gets flooded. Thus, the Itaipu Dam spillway is used to get rid of the excess water that falls on the reservoir. The sight of draining the water via spillway is something which you should not miss. If you wish to see it, you must visit the dam during December and February. The efflux of the spillway is almost equal to 40 Iguazu Falls.

You would be able to enjoy the quixotic spectacle of the light and sound show conducted by the authorities on your Itaipu dam night tour. The light emitted by 519 floodlights and 112 light fixtures seem to dance on a soundtrack, specially created for the show that becomes more ravishing on a full moon night. The inner side of the dam offers scenic views from the central belvedere. The gigantic dam’s hollow shape resembles the cathedral. The visitors can have a look at the central command room in the Production Building of the dam.

Some of the interesting places located near the dam are the Iguazu Falls, Los Glaciares National Park, La Recoleta Cemetery, and Perito Moreno Glacier.

Where is Itaipu Dam?

The Itaipu Dam is built over the Paraná River near the delimitation between Brazil and Paraguay. The dam is located at a distance of 29.5 km from the Foz do Iguaçu International Airport (via Av. das Cataratas and Av. Tancredo Neves Route).

The period from April to June is the best time to visit the dam, as it is the end of the rainy season and water levels are usually higher.

For tours on the Brazilian side: The Itaipu Dam is open for public access throughout the week, all year round. The Bela Vista Biological Sanctuary and Itaipu’s Eco-museum close for hebdomadary maintenance on Tuesdays and Mondays, respectively.

For tours on the Paraguayan side: The dam opens from Mondays through Sundays (until 10:30 a.m.). It is closed for visitation on the New Year’s Day, Labor Day, Paraguayan Independence Day, Brazilian Independence Day, Christmas Eve, Christmas, and New Year’s Eve. The local Zoo and the Museum of the Guarani Land are open from Tuesdays through Sundays (until 11:30 a.m.) and are closed on Mondays for hebdomadary maintenance.

What was the cost of constructing Itaipu Reservoir?

The Itaipu mega dam’s construction cost would obviously be enormous. About US$ 26.9 billion was collected for the construction. Besides, in paid-in capital amounted to US$ 100 million.

What is Itaipu’s power generating capacity?

The power generation capacity of the Itaipu Dam is 14 thousand megawatts (MW). There are 20 turbines at the dam, generating 700 MW each.

What are the advantages of the Itaipu power plant?

Just as other hydroelectric power plants, the Itaipu Dam has the following advantages:

What are the disadvantages of the Itaipu power plant?

Just as the two sides of a coin, the meritorious Itaipu Dam also has some disadvantages:

What is the environmental impact of the construction of the Itaipu power plant?

The loss of flora and fauna of the region and flooding are the environmental impacts of the construction of the dam.

What is the social impact of the building of the Itaipu Dam?

The social impact includes the relocation of the residents and confiscation of land. Besides, changing land use pattern, there is also a loss of historic as well as cultural heritage.

Who built the Itaipu Dam?