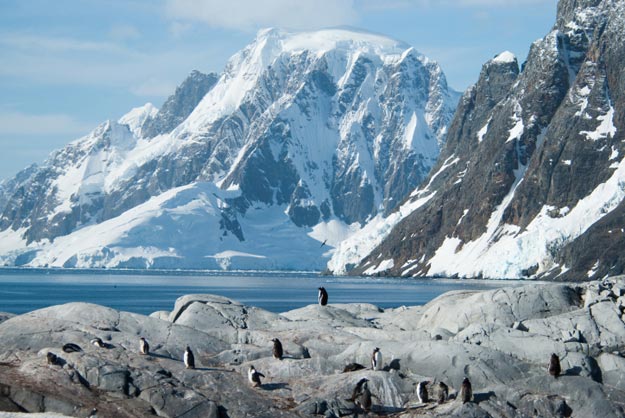 Penguins at the Antarctic Peninsula

The Antarctic Peninsula is the most visited portion of the continent of Antarctica, where an increasing number of tourists flock each year. Antarctica is claimed by various countries, including its nearest neighbors Chile and Argentina, and the United Kingdom (while the USA and Russia both reserve the right to claim land in certain scenarios). Antarctica is the coldest and driest continent in the world, and is covered with ice and snow throughout the year.

There are several cruises that make trips to the Antarctic Peninsula. Visitors to Antarctica can embark on an ecology safari to view the varieties of wildlife native to the continent. Penguin varieties include Adelie, Chinstrap, Gentoo, and Emperor, while the whales of the region are Minke, Blue, and Orca. Antarctic Seals include Crab-eater, Weddell, Elephant, and Leopard. There are also several species of bird and fish.

Activities at the Antarctic Peninsula include whale watching trips and a visit to Port Lockroy, which receives 10,000 annual visitors to its museum, souvenir shop, and post office from which tourists can mail postcards back home. The hot springs in Whaler’s Bay and Pendulum Cove are another place to visit, and the latter is known as a place to take a dip in the warm waters of the Antarctic.

In one of her publications named “Journey to the End of the Earth”, for The Hindu newspaper, the Eric Gregory Award winner, freelance journalist and author Tishani Doshi mentioned “Want to know more about the planet’s past, present and future? Antarctica is the place to go.” This pristine place has many research stations of different countries. Emilio Marcos Palma was the first person to be born at Argentina’s Esperanza Base in Antarctica.

Where is Antarctic Peninsula?

The Antarctic Peninsula is located on the northernmost peninsula of the continent of Antarctica, which stretches up toward the South American countries of Argentina and Chile. The peninsula is only accessible by boat because there are no airstrips in the area.

The Antarctic Peninsula is only accessible from November to March, which is summer in the region. Some of the ice melts, allowing ships to access the land, and the sun shines round the clock.