Unusual Church Buildings around the world

While searching for unusual places and things, I realized that the hunt for unusual is like an unquenchable thirst. The moment I see unusual things or objects in a particular niche, another subject springs up in my mind. My last article in this niche featured Ten unusual houses. Today, I have gathered a list of unusual churches around the world. Have you ever thought of seeing bones in a church, or walked into a church baring yourself? Or, have you seen people descending to reach the church in the underground level to pray? These and a lot more interesting churches are enlisted below:

The Saint Michel d'Aiguilhe Church sits atop a basalt rock in the town of Puy-en-Velay. The rock has been a sacred place for several years. This church dedicated to St. Michael constructed in 961 has replaced an ancient place of worship. As the church sits high up, as if between the earth and the sky, only agile people can climb it easily. This unusual church has an extraordinary legend attached to it. A maid was accused of misconduct and to prove her innocence, she was thrown from the chapel. She survived without injuries and to confirm her purity, she was thrown the second time. She survived again. Blinded by conceit, she jumps the third time and loses her life.

The Underground Church of St Jean is also known as, or the Monolithic church, or the Eglise Monolithique, or the Troglodyte Church. Located in the Aubeterre sur Dronne, this church was dug in the 12th century. The main purpose of constructing this church was to preserve the relics. This unusual monolith has been created out of the wall of limestone. Take a flight of stairs to descend to the church. It is one of the churches created in the underground level. The spooky graves dug in a part of the church evoke fear. Despite the high temperatures outside, the church offers a cool respite. Are you ready to go to the subterranean region?

On Sundays when the bells of the church ring in Bernauer Straße 4 street, Berlin, and you try to locate the church, you wouldn't see a tower or transept. You would reach the Chapel of Reconciliation built within a greenish metal fence. Just the cross that appears on the outer wall of the loam structure makes the visitors understand that it is a church. Also called the Kapelle der Versöhnung, the Chapel of Reconciliation has been constructed on the site of the Old Church of Reconciliation, as a mark of victory against the destruction of its predecessor during the construction of the Berlin Wall. This is an exceptionally unique church. 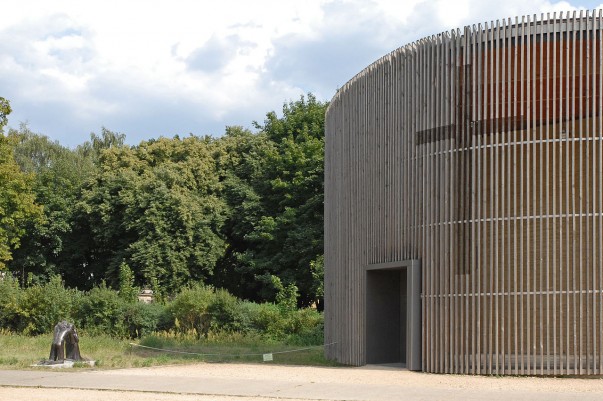 Chapel of Reconciliation in Berlin

The Dog Chapel on the Dog Mountain in Saint Johnsbury, Vermont, is a revolutionary idea in the sphere of worshiping. Some may say it is crazy. This church welcomes the dogs and humans alike. The creator of this church – Stephen Huneck, a folk artist, had a near death experience in 1998 when he was fighting with Adult Respiratory Distress Syndrome. After he recovered, he said that he could connect to what his wife had been telling him about love, and he was further able to realize how the small things which we tend to neglect, have a sound impact on our lives. Thus, he built the Dog Chapel, out of his love for dogs. He asked the dog lovers to stick a picture of their departed dog along with a message on the walls of the chapel. 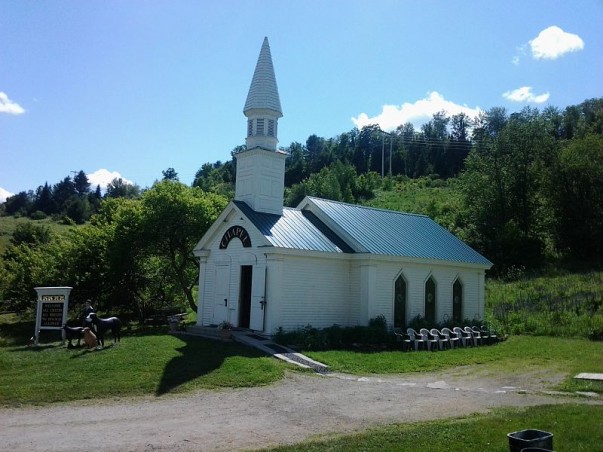 The Dog Chapel at the Stephen Huneck Gallery in St. Johnsbury, Vermont.

The chalice, candelabra, bells, garlands, pyramids, and coat of arms – all made from bones are a macabre sight. The Bone Church, or the Sedlec Ossuary, or the Cemetery Church of All Saints with the Ossuary possesses the largest collection of bones arranged in the form of objects. The church is said to have been decorated with the bones of around 40,000 people. The Schwarzenberg family paid the woodcarver named František Rin to adorn the church with bones. They wanted to create a place which reminds us of the transience of human life in contrast to inevitable death. They ended up making this gruesome church.

The extraordinary Grundtvig's Church in Copenhagen was designed by Peder Vilhelm Jensen Klint. It was built in the memory of NFS Grundtvig, a renowned priest and educator. Boasting a gothic look, this impressive church was constructed in the middle of the new housing quarter. Stained glass hasn't been used anywhere in the church. It is made up of bricks of different hues, such as yellow, pink, and orange. The design of the church has a very strong symmetry. It appears as if some geometrical pattern has been chalked out on the floors and walls. 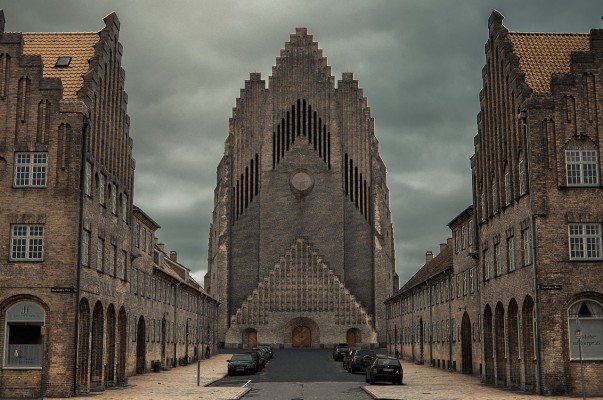 The San Francisco de Asis Mission Church has a rural touch. This aesthetic church was built around the mid-18th century at the district of Ranchos de Taos in New Mexico. The facade of the church has two bell towers on the either side. The exterior of the church, dabbed with adobe clay, gives an artistic touch to it. This sculpted church is supported by four buttresses created at the back. 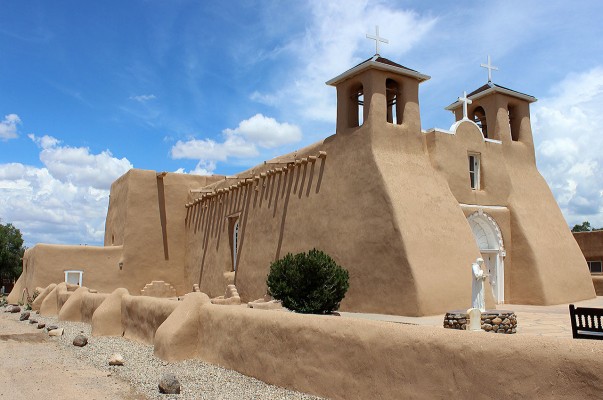 The Abondantus Gigantus is a giant Lego Church. It was built using big concrete blocks of Lego in the city of Enschede. This church was intended to be a meeting point and a place for performances during the Grenswerk Festival 2011. It is one of the temporary projects of the LOOS.FM. The church has been a one-time venue for the mass and has served as a locale for several concerts. As it is a temporary building, it may shut down soon. Visit it before it is late. If you are interested to see how it was created, watch the video.

A wooden trail leads you to a beautiful chapel set amid verdant green landscape located in Eureka Springs, Arkansas. This glass chapel doesn't boast any opulent architectural form. Its minimalist look promotes 'simplicity' – a feature of our God. The Thorncrown Chapel was constructed in 1980, away from the hustle and bustle of the city life. The designer E. Fay Jones used the architectural form propagated by the Prairie School of architecture. It is a must-visit destination. Visit this chapel to redefine your relation with the Almighty. Feel close to nature while sitting inside this glass chapel. 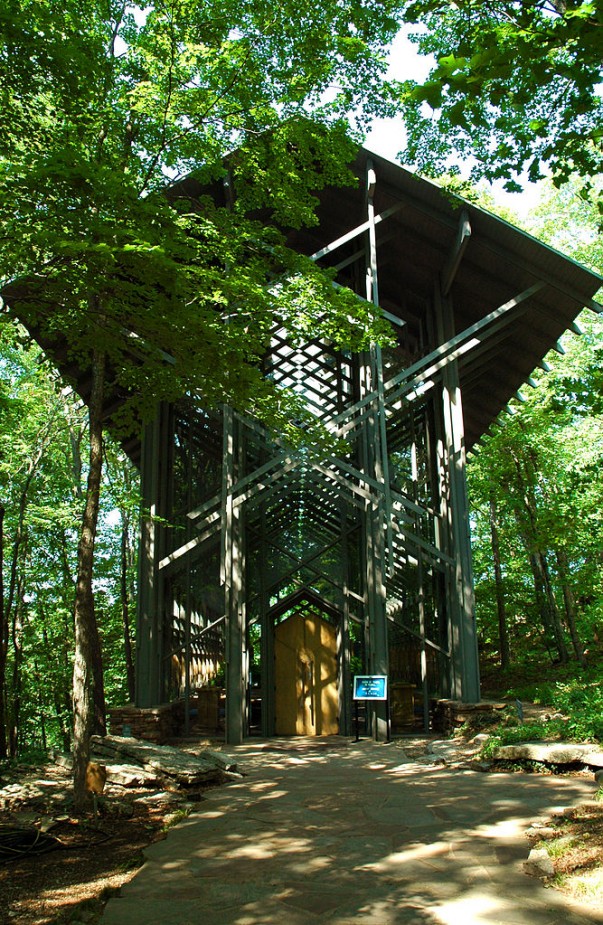 The Nude Church or the White Tail Chapel is located on the grounds of the White Tail Resort. The church focuses on shedding off material concerns, including clothes. Pastor Allen Parker believes that Jesus was born naked and was crucified naked. Moreover, Jesus left his robes in the tomb when he arose. If God made us nude, why should we drape the blanket of ignorance, and get blinded by materialism. Pastor Allen Parker says that the biases are created by clothes – the clothes worn by the poor people make the rich despise them. The White Tail Resort regards itself a Family Nudist Community. Their philosophy resembles the India's Digambara Sect of Jainism, that regards the body as the covering of their soul and considers clothes as materialistic attributes.

Chêne chapelle, also known as the Oak Tree Chapel, evokes the fairy tale charm. It is located in small French village of Allouville-Bellefosse. This hollowed tree is home to two chapels: Notre Dame de la Paix and the Chambre de l'Ermite. In the 1600s, when the tree was struck by lightning and got burned, its trunk got hollowed and it survived, the local Abbot Du Détroit and father Du Cerceau decided to make a chapel inside the tree. Even though the tree has lost its old glory and has waned away, mass is celebrated twice a year at the chapel. A spiral staircase around the tree leads you to the chapel. It is one of the oldest trees in the world. 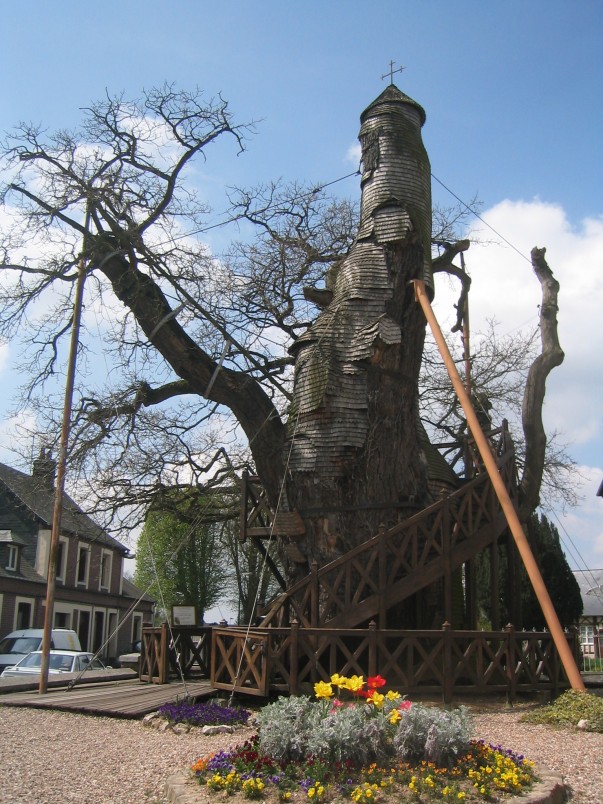 Some other unusual churches around the world are Sagrada Falimia, Duomo (Milan Cathedral) in Italy,  Saint Basil's Cathedral, and Temppeliaukio Church.

« Best Places To Visit In Bhutan Best Restaurants in Bangalore »