Home / Travel Tips / 5 Most Famous Light Festivals Around The World

5 Most Famous Light Festivals Around The World

In Shakespeare's famous play, Juliet says that the dead body of Romeo should be cut up into little stars that will light up the heavens so brightly that the sun will pale in comparison. And indeed, man has achieved this. He has made the night more beautiful than day, he has decked up night so that it shines like a bride and day seems but a gaudy courtesan in comparison.

Another festival that has cut across gender, religion and caste is Durga Puja- the famous festival of Bengal that many claim can rival the Brazilian carnival in splendor.

Here we take a look at 5 famous festivals of lights that are celebrated across the world.

This festival is linked to Indian mythology and can be called the culmination of the festival season in India. When Rama, the king of Ayodha, was out to kill Ravana for abducting his wife Sita, he first organized a Durga Puja to seek Goddess Durga's blessings which is celebrated as Durga Puja. Then, on the day of Ravana's execution, Dussehra is celebrated, and when Rama finally returns home with Sita- Diwali is celebrated. The people of Rama's kingdom were so happy to see their king return with their queen that they lit up the whole town with earthen lamps.

Today, Diwali in India is, perhaps, one of the biggest and most widely celebrated festivals which knows no boundaries of religion or class.

Families typically start shopping for gifts, clothes and jewelry a month before the festival. Frenetic cleaning of houses start too. The days are spent in meeting friends and decking up the house for the festival. In the evening Goddess Lakshmi and Lord Ganesha are worshiped for good luck and prosperity. Many consider it good luck to gamble on Diwali night. Earthen lamps, candles and tuni lights are used to light up the house. Care is taken so that no corner of the house remains obscure.

And then come the real heroes of the night- the firecrackers. What a magnificent show of light and sound! You simply need to stand on the roof of any tall building in the Indian capital, Delhi, to be a part of this festival. And no matter how far away from home, you are, you will never be alone in this big city on a Diwali night. 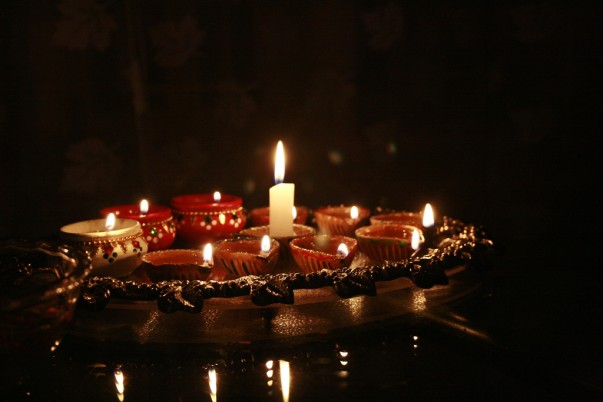 The Lantern Festival in China or the Yuanxiao festival falls in the month of February and has its roots in Buddhism. Buddhism had gained currency in China during the Han dynasty. In honor of Gautam Buddha, emperors of this dynasty ordered that lanterns to be lit inside the royal palace, on the first full moon of the lunar year. I have seen that happiness has a habit of breaking out from the castles of the rich and flourishing in the backyards of the poor. A similar thing happened with this festival of lanterns. It turned into a large scale public festival and the skies of China started to be lit up with beautiful gossamer lanterns.

The celebration includes the traditional lion dance where two men put on the costume of a lion- one acting as the body and the other the head- and both do a synchronized dance or even walk on stencils. The food of this festival is a simple fare. On this day Yuanxiao is prepared in every house. Yuanxiao is is a glutinous rice ball stuffed with different fillings. The stickiness and the round shape of the rice ball, are symbolic of the fact that as a family, we need to stick to each other and we can be complete only with our family members. 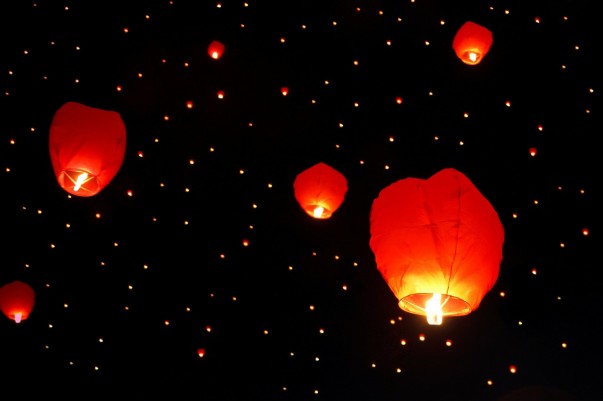 Lanterns light up the night sky in China

The lantern festival is celebrated by Chinese expats around the world. So while you may miss the spirit of the real lantern festival away from China, celebrations in countries like the USA will surely make up for it with a dazzling display of art.

Check out this video that shows celebrations of the lantern festival going on in Dallas, Texas

A witness to a Las Fallas fiesta once said that it 'resembled a cross between a bawdy Disneyland, the fourth of July and the end of the world”. Of all the crazy festivals that resonate the Spanish spirit, including the tomato festival (La Tomatino) and bull running (San Fermino), Las Fallas tops the list in sheer madness.

Here is what was intended to happen. Carpenters were supposed to pray to their patron Saint, St Joseph,and burn their wooden candle stands (called parots) which they no longer needed since it was spring and there was enough natural light. Neighbors chipped in and the parots were dressed in rags to resemble a human form. These parrots and other wood scraps that were not needed- were all burned together in the same fire.

Here is what happens now. Large ninots (puppets) are built of cardboard and paper pulp. These are so huge that they are sometimes as high as a multi-storied building. These ninots are also called fallas (meaning torches) are burnt on the last night of the five day long celebration.

The Las Fallas is a five day long festival that will leave an outsider stunned not only with the display of fireworks, sights of blazing effigies of unpopular characters, but also with the fervor that the people of Valencia display for such clamorous celebrations.

If you are visiting Valencia, stop by at the Museum of the Ninot, that houses the puppets that have been preserved from fire over the years. 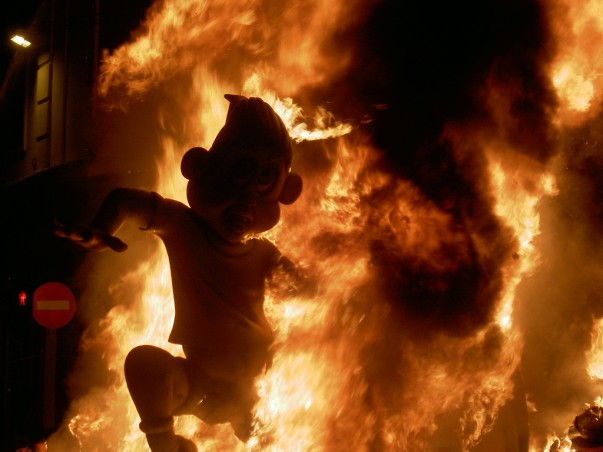 A ninot going up in flames

Well, here we have a festival that recognizes the hard working mother of a celebrity son. I am talking about the festival of lights in Lyon that pays homage to the Virgin Mary, mother of Jesus Christ. This festival bags a spot in the top three when it comes to the number of visitors it draws.

Celebrated for four days ending on December 8 every year, the Festival of Lights in Lyon, each night will bring to you dancing projections of different themes. And all of this is to the accompaniment of music. If you visit Lyon during the fest, you may stop to wonder awhile whether it is Lyon that should be called The City of Lights.

If you do not want to miss out on what goes on during those magical four days, try to stay close to the Basilica of Fourvie`re or the Place des Terreaux, both of which are important parts of the light show.

As you take a walking tour of Lyon during the festival of lights, you will see the monuments all light up dramatically- each a different color. It is as if history herself is your tour guide, and the monuments are all theater artists waiting in readiness to light up on cue from the director. 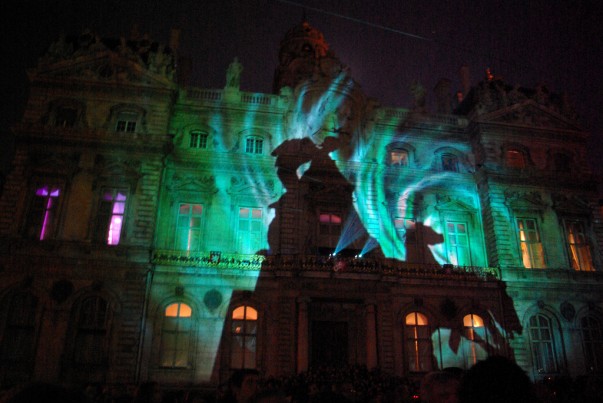 A glimpse of the festival of lights in Lyon

A fairly new addition to the list, this is already extremely popular and has redefined Berlin's position on the economic map of Germany as a major tourist magnet. The festival spans across nine days, starting in the second week of October. It is a high end light art festival that has received international fame. All the major monuments of Berlin light up with unique patterns of laser beams, concerts are held that not only have some of the best performers of the world but also make spectacular use of lights to create an unforgettable experience for the audience, and several light seeing tours take you through your very own personal experience. Result? Berlin enchants you. And over the years, it has drawn art enthusiasts in droves. The festival has recorded over 2 million visitors, 600000 additional hotel/ guesthouse bookings and has a huge presence on social media. 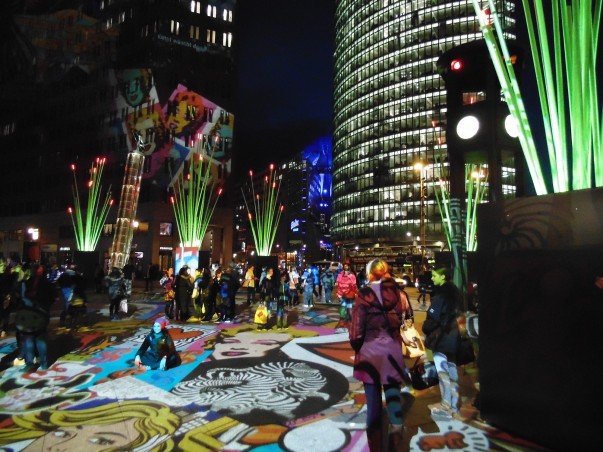 A recording of the tenth anniversary of Berlin Festival of Lights