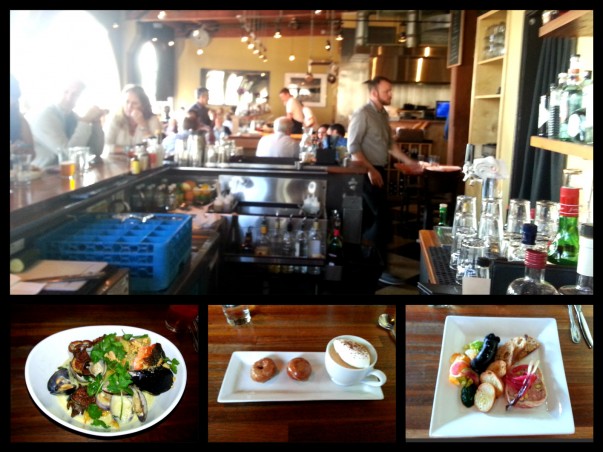 Radiator Whiskey was an incredibly lucky accident. I was staying in a hotel in Seattle while in town in business. It was time to go out for dinner, and I picked a place that sounded cool and was reasonably close – easy walking distance. And ended up having one of the ten best meals of my life. There isn’t much more to say than that, although this meal was eaten with, again, the valiant help of my daughter Amelia, who was three thousand miles away but instructed me, using text messaging and pictures, in what to order.

Again, one of the best meals of my life.

I absolutely loved the look, feel and vibe of this place. You may not – it’s definitely idiosyncratic – but it’s warm, friendly, busy, brightly lit. The place used to be some kind of dockside warehouse, I guess, or storage room, so the ceilings are high, there is a lot of heavy wood and tile around, and there are enormous windows overlooking Pike Place Market and Puget Sound. It’s simultaneously industrial and endlessly charming, with a waitstaff that really knows what they’re doing, and a big, open kitchen cranking out amazing food.

Great, as far as I can tell. Dinner took a while to arrive, because the place was packed, but the bartender, who also served as my server, really knew what he was talking about, and was able to fill me in on details about the food, what to order, and so on. For example, I was about to order the charcuterie plate as an appetizer, and he informed me that it was enormous, and that if I ordered that plus an entrée, I would not be able to move. He was right.

As a little trivia, the term “radiator whiskey” refers to illegal whiskey made in a homemade still that uses a car radiator as a condenser. This is extremely dangerous, according to Wikipedia: Stills employing used automotive radiators as condensers are particularly dangerous; in some cases, glycol, products from antifreeze, can appear as well. Radiators used as condensers also may contain lead at the connections to the plumbing. Both glycol and lead are poisonous and potentially deadly.

Not cheap. $67 for one person, including drinks, coffee and dessert.

As I’ve already mentioned, I was warned off the charcuterie plate, and instead he recommended that I order just two items from it, which would constitute a Happy Hour bar order, which would be a lot cheaper. Okay.

Appetizer orders, then, was pork page and blood sauage. The pate was wonderful --- basically flawless, with olive and other stuff in it to flavor it. The blood sausage was a revelation. It’s made with bread crumbs or cornmeal as a filler, some meat, and blood added as a flavoring agent, along with spices. The result was a sausage that was light, almost dry, and had a lovely metallic/spicy taste. Rather than the overpoweringly savory taste of much sausage, this was almost crispy, and complex.

The entrée, which the bartender recommended, was seafood stew. This can be almost anything, from the kind of steamed clams the sell on the East Coast to a thick, stewy gumbo. At Radiator Whiskey, it came as a bowl with an assortment of seafood – clams, salmon, cod – in a broth which, astonishingly, was a Thai-style curry – coconut milk, peanuts, and curry. It was an incredible tour de force. Everything in it was top-quality and flawlessly cooked, and some of it had been salted. This meant that as you worked on the dish, and the ingredients had time to settle and blend, you ended up with an increasingly salty miso-like broth at the end, which was very different from what you started with. It was rich, delicious, and incredibly creative. The bartender told me that the chef had been a cook from the area – Tacoma, maybe – and had spent a couple of years roaming around the world, learning to cook, including a stint in, of all places, Bhutan. I have never had anything like this. It was amazing.

Dessert? The menu changes daily, so what I had wasn’t what you would have, necessarily. I ordered, on Amelia’s recommendation, the salted caramel pot du crème. This came with two perfect, homemade donuts, and is, as the name suggests, a very old French dessert consisting of eggs, cream, egg yolks, milk and, in this case, salt and caramel. It was fantastic – the epitome of rich, smooth and creamy. Absolutely incredible, and the perfect ending to a really creative, wonderful dinner.

I don’t know how I got so lucky. Out of all the restaurants in Seattle, I picked what I’m sure was the very best one. Going back soon.

« Czech Houska Recipe 7 things in Brazil you must see! »