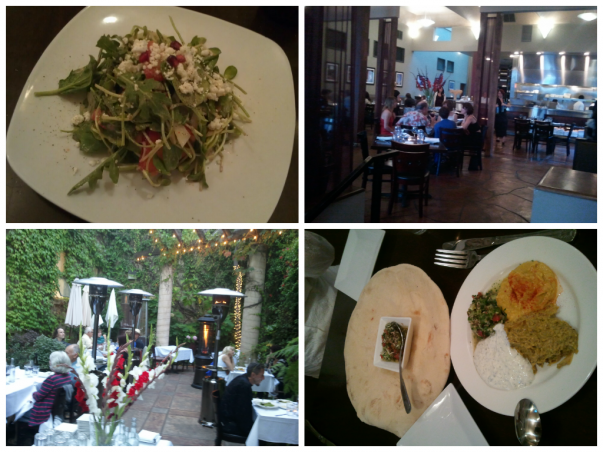 Laili Restaurant - Food that you can really enjoy.

There is a lot – I mean, a LOT – of mediocre Middle Eastern food out there. Here’s your hummus, here’s you falafel, here’s your pita, thanks a lot, pal. That’ll be $15.99. It a cuisine that’s kind of hard to get excited about because, especially to an American, it’s distinct, but it’s not different, if that makes any sense. And a lot of it isn’t that great.

Thankfully, Laili is an entirely different story. Located in downtown Santa Cruz, just off Pacific Avenue, Laili does a great job of balancing the earthy, straightforward elements of Middle Eastern cooking with modern touches, elements of other cuisines, and friendly, expert service in an elegant, airy setting.

The result is food that you can really enjoy, savor and think about a little without lapsing into preciousness or pretension. Everything is good, expertly done, and interesting. When it works, the team at Laili isn’t afraid to combine ingredients from different cuisine, or add dishes that don’t seem to fit the overall scheme. You find yourself repeatedly saying “Wow – what a neat idea! And it really works.” And it does.

Part of what makes Middle Eastern food work is freshness, which Laili provided in spades. The core ingredients in this kind of cooking have strong, organic flavors. Think of hummus. The basic ingredients are really simple – oil, chickpeas, spices. Run-of-the-mill hummus isn’t actually bad, but can be bland, oily and forgettable. Really fresh hummus, by contrast, is a revelation. That kind of freshness and consistency made the meal a really memorable evening.

The restaurant is right in downtown Santa Cruz. Although there is limited on-street parking, which is metered, there is a nice, big three-story parking garage two blocks away.

Laili is on Cooper Street, just off Pacific, in a lovely, ivy-covered building. The main dining room has high ceilings, with windows that look out on the street, as well as a beautiful little outdoor terrace, with high brick walls and more ivy. The kitchen is integrated into the dining room, meaning that you can watch the action from your table, if you like. There’s a small bar tucked into the back, with a nice, if limited, wine list. The overall effect is really nice – spacious, surprisingly quiet, and both contemporary and modern at the same time.

Service is good, and the servers are absolutely classic Santa Cruz types – knowledgeable, but, ah, somewhat eclectic. As an example, our waitress was tall, blonde, and looked like she spent a lot of time in the sun. Which, it turned out, was exactly right. We asked her about her day, and she said she got up at dawn to surf, then spent the day working as a nanny, and waitressed at night. Surfer/nanny/waitress. Welcome to Santa Cruz, pilgrim.

Expensive -- $100 for two including drinks and desserts. Generous portions.

The food is a revelation. EVERYTHING is good, and everything is creative. To begin at the beginning, as an appetizer, we ordered the Silk Road Plate. This came as a large, flat plate with nan on it, along with a grouping of four classic Middle Eastern accompaniments – hummus, yogurt, tabouli and babaganoush. In addition, in the middle of the nan was a small dish of topping, to be spooned out over the nan as desired. Everything was fresh, everything was delicious, and we ate every scrap of it.

The second ordered appetizer was an absolutely remarkable salad, which is called the Silk Road Salad on the menu. This absolutely fails to capture its complexity, or its goodness. It was a combination of strawberry, fennel, greens, a creamy blue cheese, and a champagne dressing. Everything, again, was fresh, and the result was really impressive.

For entrees, we first ordered a pasta with arugula. This included sun-dried tomatoes, olives (a nod to the Middle East), chicken and pesto. With this kind of dish, it’s not hard to end up with a gloppy, tasteless mess. Everything has to work together, and you’re dealing with some fairly potent ingredients. If, for instance, the chicken isn’t properly spiced and grilled, or someone’s too liberal with the pesto, it doesn’t work.

This dish worked. It worked like crazy. Every flavor – and there were several of them – was perfectly balanced. The chicken was flawlessly prepared – juicy, nicely spiced, and so on.

The other entree was the Beef Koubideh Kabob, a rectangular plate of jasmine rice, grilled and seasoned beef, and vegetables, including peppers, chutney and yogurt. It too was almost perfect. The rice was flawless, the beef was great, and so on. Everything worked.

The same was true of dessert – we ordered, and split, a dessert that consisted of rice pudding sprinkled with a healthy dose of ground cardamom, along with sliced strawberries. The effect was sensational – the rice wasn’t too sweet, the cardamom gave it depth, and the strawberries were a great finishing touch. Add to that a French press cup of excellent coffee, and you have a really nice dessert that finishes the meal without carpet-bombing you in sweetness.