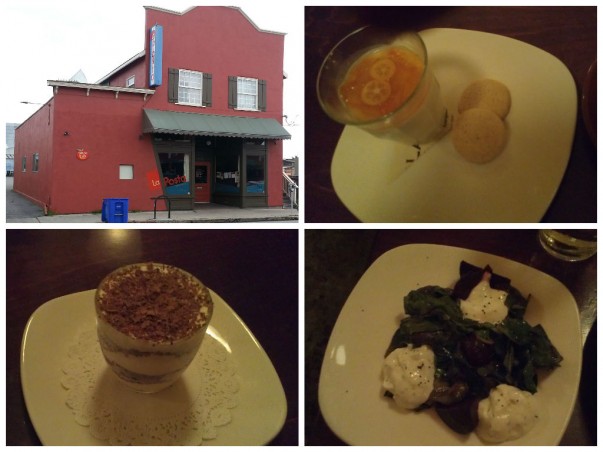 We tried out La Posta on Oscar night, 2014. Maybe, as Patrick O’Brian put it in one of his novels, I’m turning into a cantankerous old dog rather than being a friendly young one, but the entire self-congratulatory Oscar spectacle leaves me cold and more than a little annoyed. I don’t care what some actor thinks about the political situation in Tibet. I don’t care about Jennifer Lawrence’s dress, or Kate Blanchett’s views on women in the film industry, or Ellen DeGeneres’s selfie. So, we went out to dinner, which turned out to be a vastly better idea.

The section of the Seabright neighborhood of Santa Cruz near the harbor is full of surprises. For instance, if you walk into one place, what looks like a pretty boring industrial building from the outside can turn out to be a three-story indoor rock-climbing wall, full of people dangling from ropes. A pet store turns out to contain enormous, exotic, scary-looking lizards. Brady’s Yacht Club, which looks utterly unprepossessing, turns out to be one of the best, rowdiest, most classic dive bars ever. The harbor itself turns out to be an independent municipality – basically, a city-state inside Santa Cruz. And so on.

La Posta is no exception. Located on a semi-gritty section of Seabright, with a nondescript exterior and a big lit sign that promises much less than the place delivers, La Posta turns out to be an elegant little jewel box of an Italian restaurant that serves creative, precise, classic Italian cuisine in a thoroughly professional setting. I really liked it.

Side Note: however, restaurants cannot control who one is seated next to, and had I been dining with the foursome next to us rather than Beth, I would have written a radically different review, ending with me either being helplessly drunk, or committing murder (or suicide). Note to white middle-aged restaurant patrons: please try to avoid annoying the living daylights out of your dining companions and nearby diner’s with lengthy tedious utterly predictable discussions of various White People Subjects such as: local real estate prices. Your child’s GPA. The stock market. The marriages of your friends and neighbors. Who makes how much money. And so on. Please.

Okay, done venting. On with the review.

La Posta is on lower Seabright. There is a teeny parking lot next to it, and some on-street parking, so be prepared to hunt around a little for a place. Also, although the neighborhood isn’t exactly dangerous, there are some semi-undesirables hanging around (including at Day’s Market, which is down the street) so pay attention to your surroundings.

Good – wait staff in traditional Italian restaurant aprons and whites, who know their stuff, and are their when you need them and not when you don’t.

Not cheap -- $130 for two, before tip, including two drinks and two desserts. Vegetables, interestingly, are served as an additional side dish, which definitely increases the cost. Oh well.

Classic Italian, done very … respectfully. This isn’t a red gravy joint, nor is it some exuberant “When You’re Here, You’re Family” place where the schmaltz gets served as a side dish. This is some pretty serious Italian cooking, done by some pretty serious cooks (although, as with every place in California, the kitchen staff is at least 50% Mexican – there’s a very small window in front of the building that looks straight into the kitchen, like a porthole, and as with the Puerto Ricans you’ll see in every Italian kitchen on the East Coast, the people actually making stuff happen in Italian kitchens here are Mexican).

The chef also seems to have a real love affair going with root vegetables, and with contrast. Many of the dishes we had, including desserts, either incorporated or were built around an unusual, often earthy or strong – addition such as buckwheat, beets, citrus or something else that raises the stakes of the dish. It was really interested, and educational, to have on one’s plate, and evidence of someone who was not just slinging out dinners, but wanted to deliver something original and complex and interesting. It worked. It was a wonderful meal.

Our meal began with two interesting salads. The first, mine, was a fennel, radish, citrus and artichoke salad with olio nuovo. The citrus is what really made this dish – grapefruit really worked here, beautifully balanced by the intense taste of the fennel. The other salad was a really, really simple one -- farm lettuces, sherry-shallot vinaigrette, parmigiano reggiano. That worked well, too – the ingredients were as simple as simple can be, but all top-quality and nicely presented. Parmigiano reggiano is a cheese that has to be done like that – you kind of have to get out of the way and let it go, which is exactly what this meal did. Great start.

My entrée was sea bass -- white sea bass with cauliflower puree, romanesco, sultanas, green olive and Meyer lemon. While it was good, it wasn’t amazing. The sea bass was just slightly overcooked, and there was just too much going on around this dish for it to work. Puree, olives, lemon and a couple of other things are just too many tastes to work well with what should be a simple, clean piece of freshly grilled fish. Good, but not great. The side order of chard and beets with yogurt and poppy seeds worked wonderfully, however – these are two strong root vegetables (I love beets) and yogurt set it off nicely, with the poppy seeds being a nice touch.

Beth’s entrée worked better -- tagliolini with Dungeness crab, nettles, lemon, chili, mint and spring onions. Basically, this was a crab and pasta dish, with some acidy ingredients added to balance out the richness of the crab. It worked well, particularly the mint and the lemon. The result was a pasta dish that was rich, but not overwhelming. This was paired with the vegetable order of young carrots, cavolo nero and toasted farro -- baby carrots with a root vegetable and a toasted grain. Also nice – they really know their way around root vegetables in this place, and a good backdrop for the richness of the pasta main course she had.

We each, of course, ordered dessert. For once, we didn’t share. I had, of course, a tiramisu, but one made with buckwheat instead of the normal sweet, light cake. It was great – it gave the dish some heft, and more texture than normal. Beth had a pannacotta made with blood oranges and served with polenta cookies. Also great.

This is serious Italian cooking by someone who’s also obviously got some interest in local produce, in surprises, and in excellence. This is an adult, no-kidding restaurant, and highly recommended. Just be careful who you sit next to.