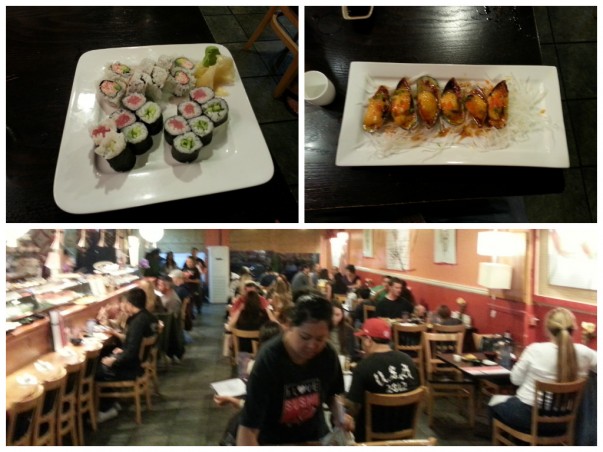 I Love Sushi is fun. There’s really no other way to describe it.

When you think of Japanese culture, at least as an American, you think of seriousness. Tea ceremonies. Driven businessmen who work until they drop dead at their desks. Serious, organized, methodical, disciplined, etc. A relatively formal culture, where appearance and harmony are everything.

Yet, there’s another side. The fun side – fun to the point of being a little loony. Hello Kitty. Very weird anime. Harajuku girls, parading around in costumes that would make a drag queen a little ill with envy. Japanese game shows, which makes it seem like the entire culture has developed an amphetamine addiction. Fitting right in there with all of this is I Love Sushi. The place is brightly lit, noisy, relatively cheap, kind of zany, and a great deal of just plain fun. The food’s pretty good, too.

Santa Cruz is, after all, a college town. This is the kind of place that college kids go on dates. Kids who are looking for a noisy, exciting evening, with the possibility of, yes, karaoke. And on a budget. That’s I Love Sushi.

I Love Sushi is on Front Street in Santa Cruz. There are several municipal lots nearby, so parking’s easy, but the area is just a little sketchy – so keep your eyes open. It's basically fine, but you never know.

Fun. Fun, fun, fun. It’s one big room, with servers who wear black “I Love Sushi” t-shirts with the restaurant’s motto on the back – “That’s How We Roll.” All kinds of Japanese-themed stuff on the wall, people from every walk of life happily slurping down rolls, people constantly coming and going. Peaceful? No. Reverential Japanese cuisine? Not quite. Fun? Yes!

Plus, this is definitely an owner-operated place. Therefore, they’re also into handing out free stuff. We sat down at our table, and within thirty seconds, a couple of nice little rolls, compliments of the house appeared, followed shortly thereafter by a small bottle of hot sake. Thanks, guys. Apparently they do this all the time.

Casual and efficient. The servers are mostly, as you might expect, college kids with jobs. They know what they’re doing, but they’re all about getting the food there, getting the menu in front of you and so on. No descriptions at all of the food, which is fine with me. This isn’t The French Laundry. It’s I Love Sushi.

Pretty expensive. $90 for two, including drinks and dessert. The portions are adequate, but not enormous.

It’s good. Is it great? Nope. It’s pretty standard, assembly-line Japanese, with a heavy emphasis on various kinds of rolls, but it’s good.

We started with the baked mussels, which are sort of an I Love Sushi version of Oysters Rockefeller. Six mussels, topped with spicy mayo and then baked in their shell. Nice – savory, not too much, and interesting to eat with chopsticks (for “interesting” read “challenging”).

The first entrée was the roll combination – a California roll, tekka maki, and kappa maki. All made with vinegared rice, wrapped in seaweed and surrounding a core of sashimi, or some other kind of raw fish. The California roll was the same, except wrapped around cucumber, imitation crab and avocado. All good. Ultimately, there really isn’t a lot to say about the quality of the food. It was good. Period.

The other appetizer was beef teriyaki. This, unfortunately, wasn’t so great. The beef was quite dry, a little overcooked, and despite being slathered in somewhat gelatinous teriyaki sauces, was still more than a little crunchy and a little difficult to eat or enjoy.

Bottom line – this is a good place for a fast, reasonably priced meal if you’re headed to downtown Santa Cruz for a movie or something else. Stick to the rolls, enjoy the floor show and the fun, don’t order anything especially tricky, and you’ll do just fine.