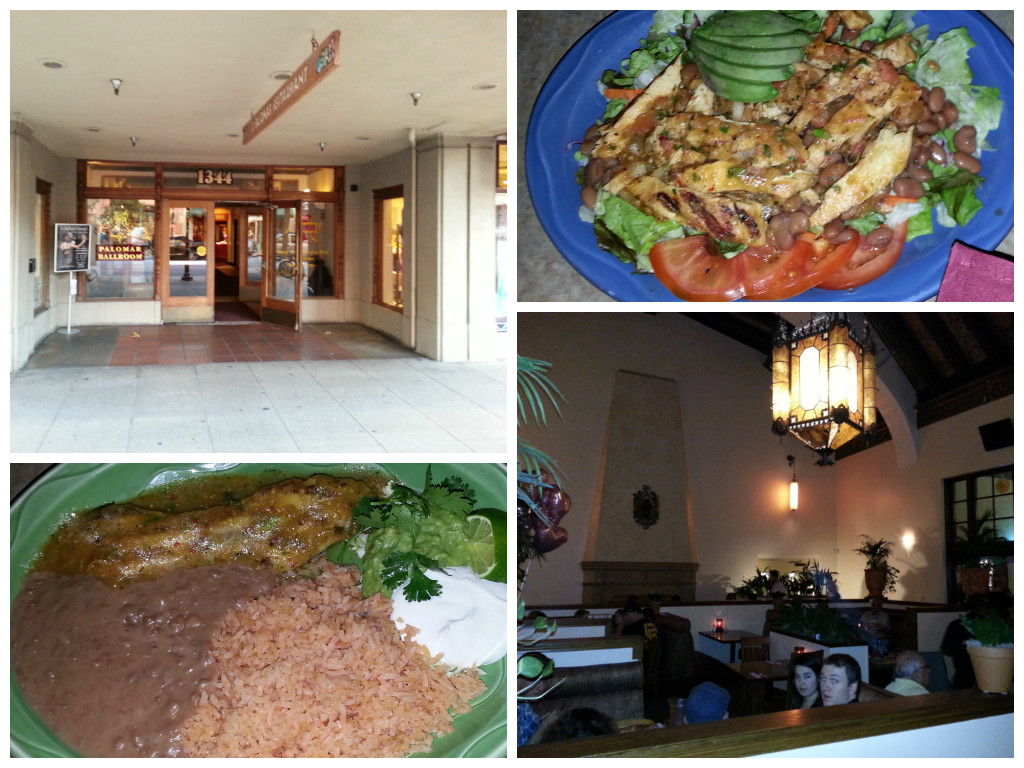 Something that not a lot of people realize (there’s got to be a more elegant way to phrase that) is that California and Mexico have been, for hundreds of years, sort of the same country. The history of California and the history of Mexico have been very closely connected, and there has been an enormous Mexican presence in the state since, well, long before it was a state.

El Palomar kind of reflects that. If you live in California, Mexican food is available almost everywhere. Palomar is a high-end, very nice Mexican restaurant that is also housed in a historic building, which does credit to both the food itself, and the ancient and complex connections between Mexican culture and the California of today.

A little about the building. Built in 1929, The Palomar Inn was constructed as a hotel. It’s a beautiful Art Deco structure, with lots of Mission-style touches inside – beamed, painted ceilings, stucco, fireplaces and so on. The restaurant is located in what was once the lobby of the hotel – the ceilings have to be at least thirty feet high, and the overall feel is of a place that’s spacious, hushed and beautiful. There are a couple of other older buildings like this in the region – the De Anza Hotel and the Sainte Claire in San Jose are like this, too – that remind you of another perhaps more civilized, age in California’s history. I liked it a lot.

El Palomar is on Pacific Avenue, in Santa Cruz, which means there’s all kinds of metered and garage parking nearby. It’s right next to the Del Mar Theater, which makes it easy to spot.

Serene, elegant and historic. The restaurant itself has been in business since 1982, and the building in which it’s housed is historic, and airy. The service is professional and really low-key. Everyone’s nice, but they’re not in your face. Also, because the place is nicely spread out, there is a degree of privacy at the tables, and you don’t overhear other conversations, or really have a sense that anyone else is in the place.

Very good. The servers seemed to work in a team, with one person handling busing the table, bread, water and so on. There was a second server and, interestingly, a third person who handled the payment and credit card. This made for a very efficient, organized meal, with everything arriving pretty quickly.

Moderate -- $87 for two, including drinks and a shared dessert. Portions are moderate – not the frequently-sighted massive pile of Mexican food, but also not bird food either. Just about right.

Mexican food is ubiquitous in California, and it can be hard to get away from burritos, tacos and fajitas. Mediocre Mexican food tends to be greasy, starchy, heavy and kind of tasteless. To avoid this, you have to bring both creativity and effort to what is otherwise assembly-line cooking. Palomar does this beautifully, with dishes that are a nod to mainstream Mexican cuisine, but also do or bring something different to the experience.

As an appetizer, we began with Coctel de Camarones. This is basically a prawn cocktail – prawns served in a large cocktail dish, in a cold seafood broth seasoned with avocado, cilantro, green onions and cucumber. Think of a hybrid of shrimp cocktail and gazpacho, and you’ve got the idea. Really nice – flavorful, refreshing, and a great transition into the meal.

For entrees, we first ordered Ensalada del Pollo, which is a chicken salad – a salad base, with grilled chicken, in a tomatillo sauce along with beans and avocado. Another win – the chicken was nicely grilled, and the salad was a great balance of crisp greens and richer avocado and beans.

The other entrée was snapper, which had the dauntingly long name, in Spanish, of Huachinango Al Estilo El Palomar or Guajillo. This was a perfectly seasoned – spicy, but not too spicy – piece of grilled snapper, simmered in tomatilly sauce and served with refried beans and rice. Very nice, fresh, not overdone and now drowning in sauce.

Dessert was flan, the traditional Mexican custard. Flan is essentially very simple to make – eggs, sugar, milk. It also takes some work, if it’s done right, and it’s delicate – it will split open if made improperly. In other words, really good flan needs to be made on the spot, and El Palomar’s was. A terrific ending to a meal that would have made any Mexican mother proud.